After considering a road ride, I have decided to take the 29er on a mixed trails and roads ride. Starting at the bottom of Windy Hill preserve means climbing for the first 3 miles with no warm-up, from 600 to 1800 ft. Despite the recent cool down, it was warm (78F) and few of those really steep pitches were quite brutal. Once on the "ridge", I realized how beautiful fall riding is here. Despite the trails being dusty, the views were nice, the tall grasses are all either dry yellow or gone (means no pollen for me allergy sufferer), the poison oak is almost all red and thus easy to recognize, and mainly - no fog.
I felt strong and tried to climb in the middle ring standing up. To my surprise, that's where the big bike really came alive and the rough rocky trail was nice absorbed by the big wheels with 35 psi in the Kenda SB8s. The problem is that I can hammer standing for like 5 minutes at the time, so often I resorted to spinning the granny sitting. Also, the quite worn out rear tire was easily spun out, but not anywhere as easy as on the 26" bike.
Here is a picture from the Ancient Oaks Trail, it is my favorite place to stop for a gel or bar. 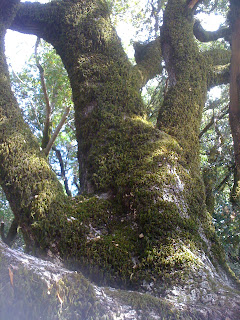 The second half of the ride was on a road, getting passed by some roadies, but beating many while doing about 17mph.
Posted by Unknown at 11:38 AM No comments: 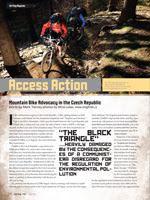 Going biking around North Bay always poses a dilemma for me, a Mid-Pen inhabitant: is it worth the trip through San Francisco? What is the weather going to be like north of the GG bridge? And no singletrack to speak of, are the fire roads really that interesting?
But the descriptions of "hot rides" on http://www.marinfattire.com/ sounded good, weather forecast for Fairfax was mid-seventies and a friend was interested in riding together, so we decided for a ride up Mt. Tam from Ross via Eldridge, Hoo-Koo-E-Koo and the Old Railroad trails.
The day began by driving to the meeting point through the 19th Ave fog and drizzle (I knew it, what the hell am I doing at this place, only the Scots and Brits may possibly like it here etc etc...), finding Ross Commons with all the GPS-suggested streets being closed for repairs, and continued by us reaching the trailhead just to learn the trail around Phoenix Lake was closed and the shortest alternative was a 10 mile detour on pavement. The other alternative was to sneak through the gates. Guess which one we chose.
The climb up was actually quite scenic, first through some redwoods with small creeks flowing, and then on exposed hillsides of Mt. Tam with views like this: 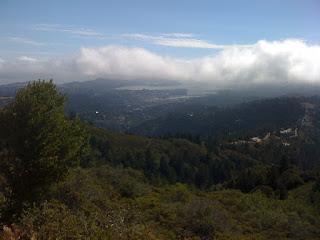 ﻿
After some initial steep climbing, the road grade decreased once we hit the Old Railroad trail, which I guess is the advantage of all old railroad beds. 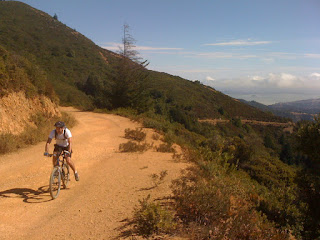 After a short break at the East Peak, we headed down to take the supposedly more technical way down Eldridge Grade. It was definitely rocky and steeper than the way up, with two lines to pick: one with the "death cookies" and the second one on solid but sharp rocks. Well, the loose small rocks definitely make steering above certain speed interesting, but I guess the author of the term did not ride some of the downhills at the MTB Himachal race. This downhill was over in no time and we backtracked the last portion of the ride the same way we started, for total of 32km (20km up and 12km down). There is no Garmin track for this ride as my Edge 500 was in my Camelbak in a powered down state.
Conclusions: this is a really nice ride, the weather in Ross and Fairfax is probably mostly really nice, all mountain bikers and even hikers said hello, and the views fromthe summitt are fantastic.