I realize that my blogging activity has dropped off significantly last year. I often thought about reasons for this Jan's B-log existence and the more I thought of it, the fewer reasons I could come up with. I am just a regular guy with a day job and a mortgage who enjoys the outdoors and rides bikes. My activities are no adventures and frankly I see no valid reason why anybody should waste time to read my notes.
In a recap, the 2014 has been a busy, sometimes stressful, but overall a very successful year for us. Marketa has graduated with a Master's degree from a US university (her second Master's), something nobody in our extended families has ever achieved. I found a new job that I enjoy tremendously, returned from the rainy Northwest to sunny California, bought a house and still found time to run and bike. Whatever few pockets of existential vacuum I had got filled with purpose, meaning and directions. I don't feel much need to share on the Internet, or seek external validation for what I do or think. I like to share photos with friends and family and I still log some longer runs and rides onto Garmin Connect, just for archival purposes. I guess there are some plans for months and years to come that could make an interesting blog post or few, but I am sure these will be few and far apart.
Yet the end of old year and transition to a new year and the time off is usually an opportunity for spending more time outside and the last two weeks were active ones, so here is a quick description.

Solstice Ride
On the day of Winter Solstice, Jill, Beat and Liehann planned a long ride through preserves of the South Bay:


This was an opportunity for me to try riding a 50+ mile ride after many months of much shorter rides, and in a wet, muddy weather, too. One third into the planned distance I cramped badly, decided to continue at a bailout option, almost passed out on the climb up Montevina and finished after sunset. Here is what my Garmin recorded:

Christmas Runs
On Christmas Eve, having the traditional Czech fish and potato salad dinner ready, we went for an afternoon run at Del Valle, enjoyed the dramatic lighting and freshly green hills, only to get completely soaked by a strong rain shower on return. This run's photo was picked by us as our "Pour Feliciter 2015" greeting after sifting through hundreds of 2014 photos.

On Christmas Day, I wanted to show Marketa the new John Nicholas trail in Sanborn park. We started  at Saratoga Gap on a cold and very windy day. No matter how hard we tried to keep ourselves warm by efforts on this challenging trail, we had to cut the run short after 8 miles feeling hypothermic.

New Year at Tahoe
A week long trip to Tahoe, or more exactly Soda Springs area, with friends was supposed to be all relaxation and good times. It was all that, plus a few days of diverse snow activities. When we arrived at the cabin, temperature dropped to 12F (3F at night) and winds picked up, with strong gusts blowing swirls of fresh snow around Serene Lake. 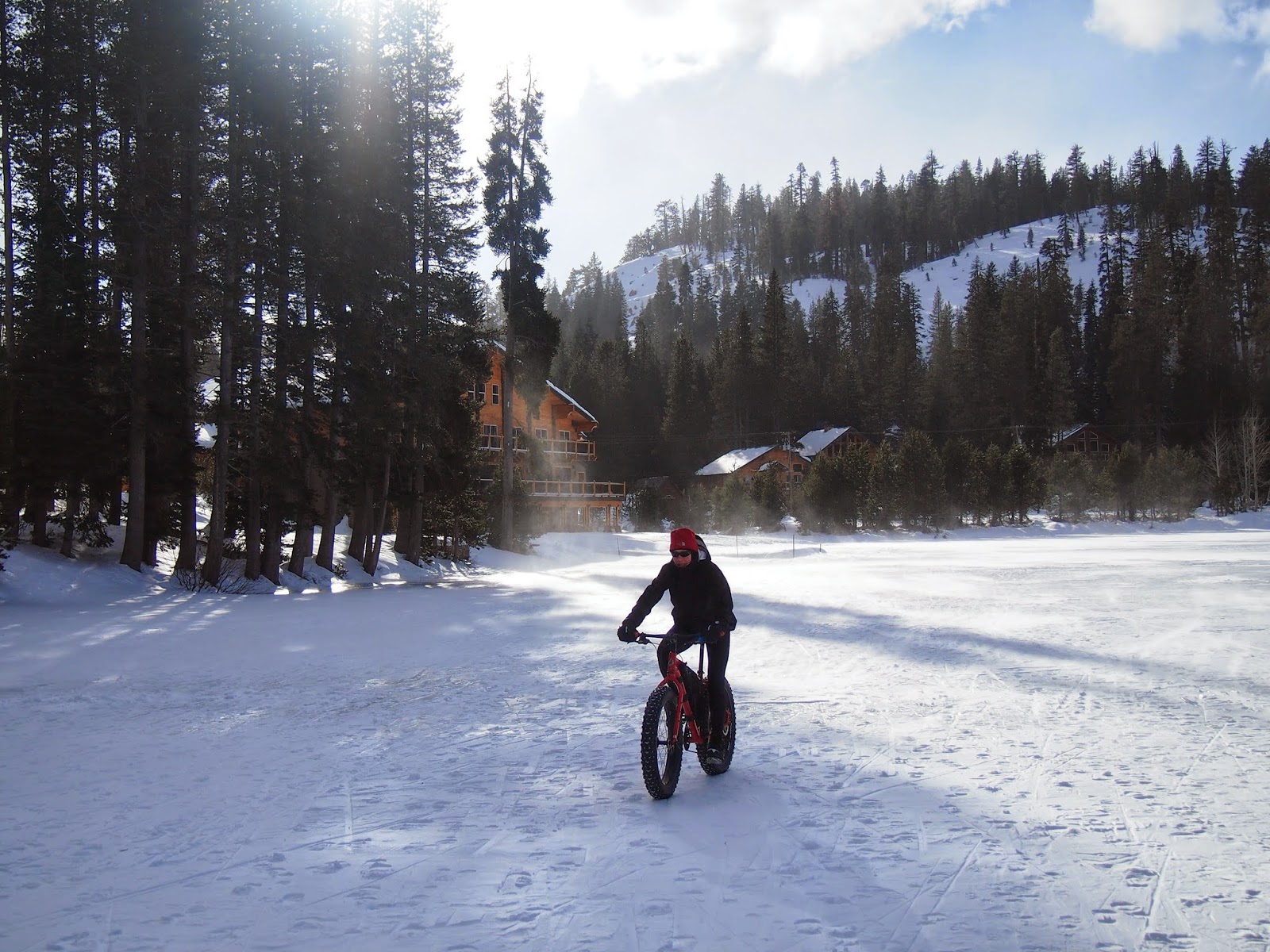 The lakes were frozen and provided a nice firm surface for some fat bike lessons and early morning loops. Downhill skiing at Sugar Bowl yielded icy pistes and wind drifted layer of sugar snow. It was a sunny day and the slopes were not packed, so we managed to ski non stop, but for the hideous amounts of money they demand for lift tickets, it was not much.

Cross-country skiing at Royal Gorge the next day at warmer temperatures  was much more enjoyable and resulted even in a small adventure when we tried to connect to trails through some ungroomed terrain and ended up falling into deep snow in unpassable terrain. It was a tough trip for adults and two young boys, sons of our friends, did a great job of finishing on very tired legs. 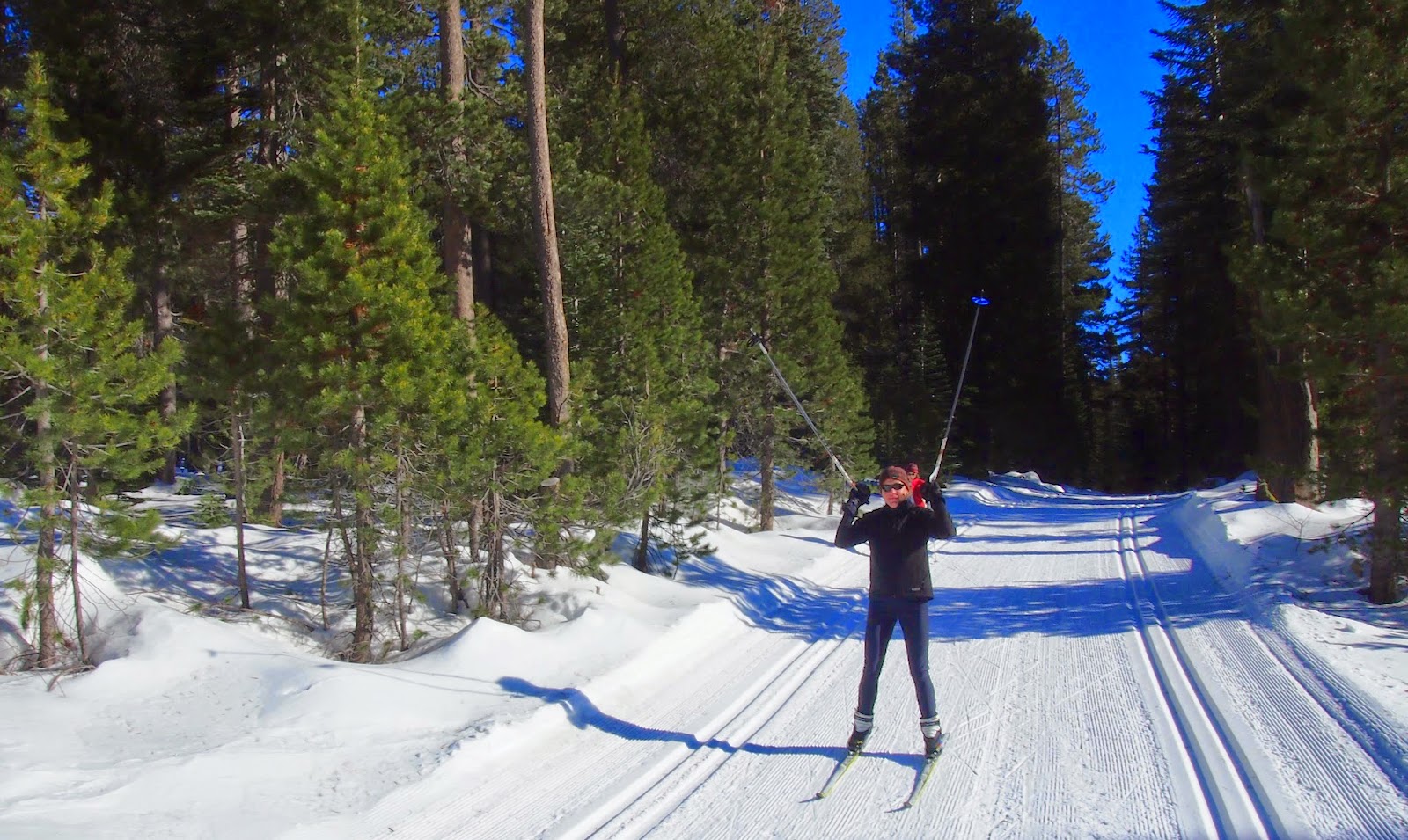 Soda Springs Road Fatbiking
I brought my fat bike along for this vacation, hoping to scout out some riding in the area. One possibility was to cross Serene Lake and continue onto Soda Springs road, which is a public road that eventually reaches Foresthill and goes all the way to Auburn, probably more that 70-80 miles out. My goal was much more modest - I just wanted to see if the road was rideable at all. I was advised by a skier that there was a settlement about six miles down into the valley and that I should definitely stick to trail to avoid some unpleasant encounters. The first mile of trail was well packed by snowshoers, except a terribly rutted spot where some teenagers buried their two trucks in deep snow. Beyond that, the trail switchbacked through some sunny open slopes and snow surface was fast. 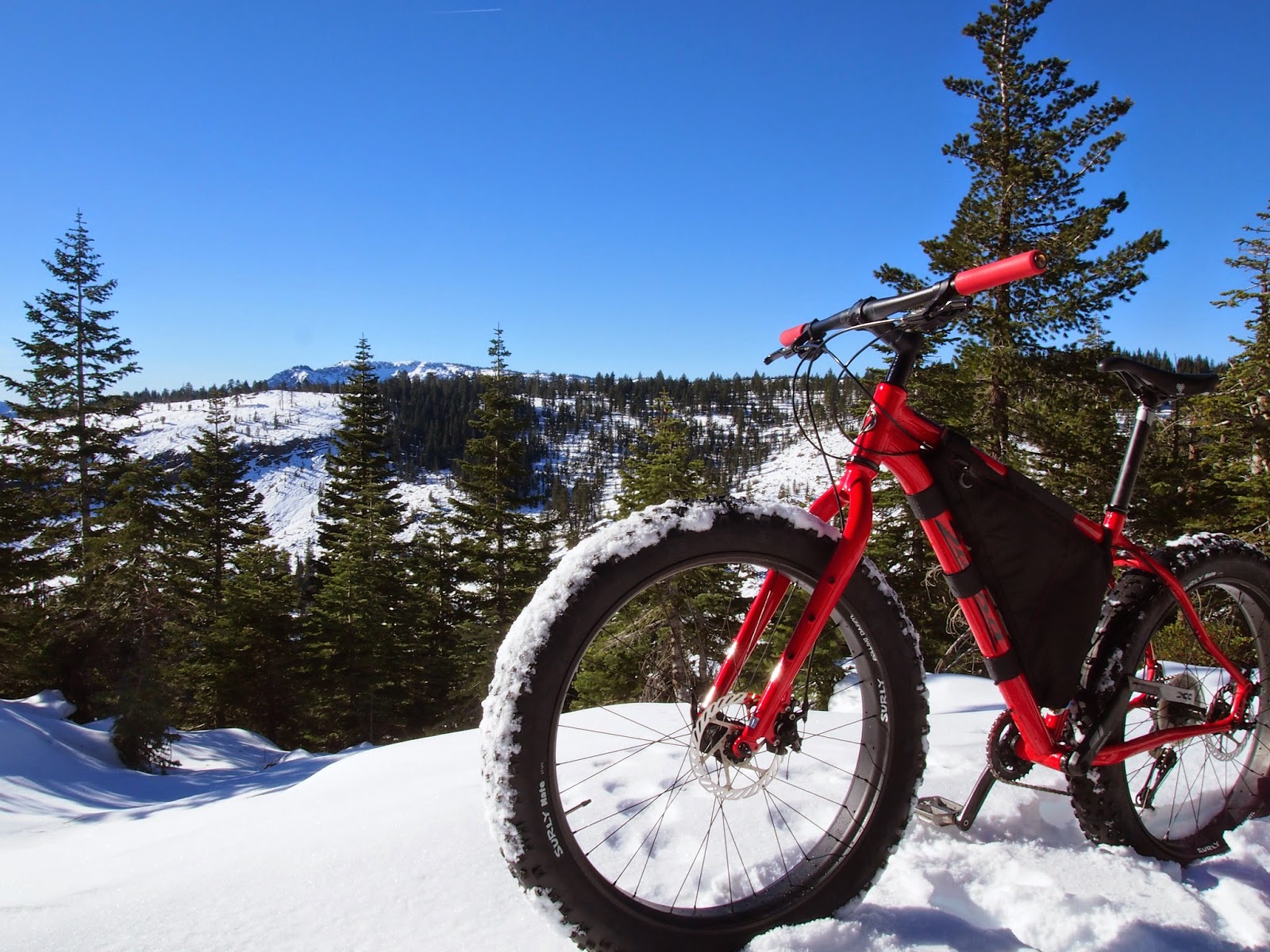 The next two or three miles were in deep woods, shaded and cool and riding downhill was easy. I stopped few times and tested the snow for climbing up and it seemed to hold fine. There were two snowmobile tracks - one up and one down I assumed - and I hoped that the drive belt track would be firm enough for what would be an extended climb back up. I rode through some beautiful backcountry, crossed some streams and noticed that many trees around me were huge cedars, the trail was littered with cedar cones at some spots. At mile 6 I noticed "No trespassing" signs on trees around me, actually they read "Please, no trespassing" so I thought whoever lived here were nice people. Shortly after that, I saw log cabins and houses scattered around in the woods. No smoke rose from the stone chimneys and I could see no vehicles, but this was undoubtedly the Cedars Community. The forest opened up to a large meadow and as I got off the bike to cross some very icy section of the trail, I saw a wolf standing in the middle of a clearing, about 150 yards away, looking straight at me. As I frantically reached for the camera, the animal slowly turned around and walked away. Just as I randomly snapped the first shot without checking any camera settings, the wolf stopped for a moment, looked at me once more, then disappeared into the trees.


I ate my lunch standing and feeling uneasy, not about wild animals but rather because I knew there were some people around I could not see or hear. The trail was very icy towards a creek crossing, but then seemed to have good snow cover climbing up the opposite side of the valley. There was no guarantee of a snowmobile track, though, and I knew what took an hour down would be about twice as long coming back up. It was a slow and hard climb, as expected, but the snow held up nicely most of the way, so except few spots in hairpin turns, where the snowmobile had churned the snow up, it was all saddle time. The GPS track is here: http://connect.garmin.com/modern/activity/664348470
The Cedars settlement is marked on Open Street maps, but Google maps ignore its existence. It was probably possible to ride a mile further to the North Fork of American River, but I think that beyond that it would be hard to continue if the snow was not packed.

Hike to Hole in the Ground and PCT
Our last day of vacation, we parked at Boreal Ridge ski area and hiked up the connector trail towards PCT. I wanted to see if this trail and the famous HTG would be good for snow biking. The fist section of what is a fire road in summer was packed down by many snowshoers, hikers and back country skiers. After an intersection with HTG, the trail pitched steeply up and while being still very solid surface, I suspect it would be beyond (at least mine) ability to pedal on a fat bike. The HTG trail itself had a deep snow cover and except some snow shoe footprints, it was untracked. It is a narrow singletrack through some very technical rocky terrain and I guess not at all bikeable. 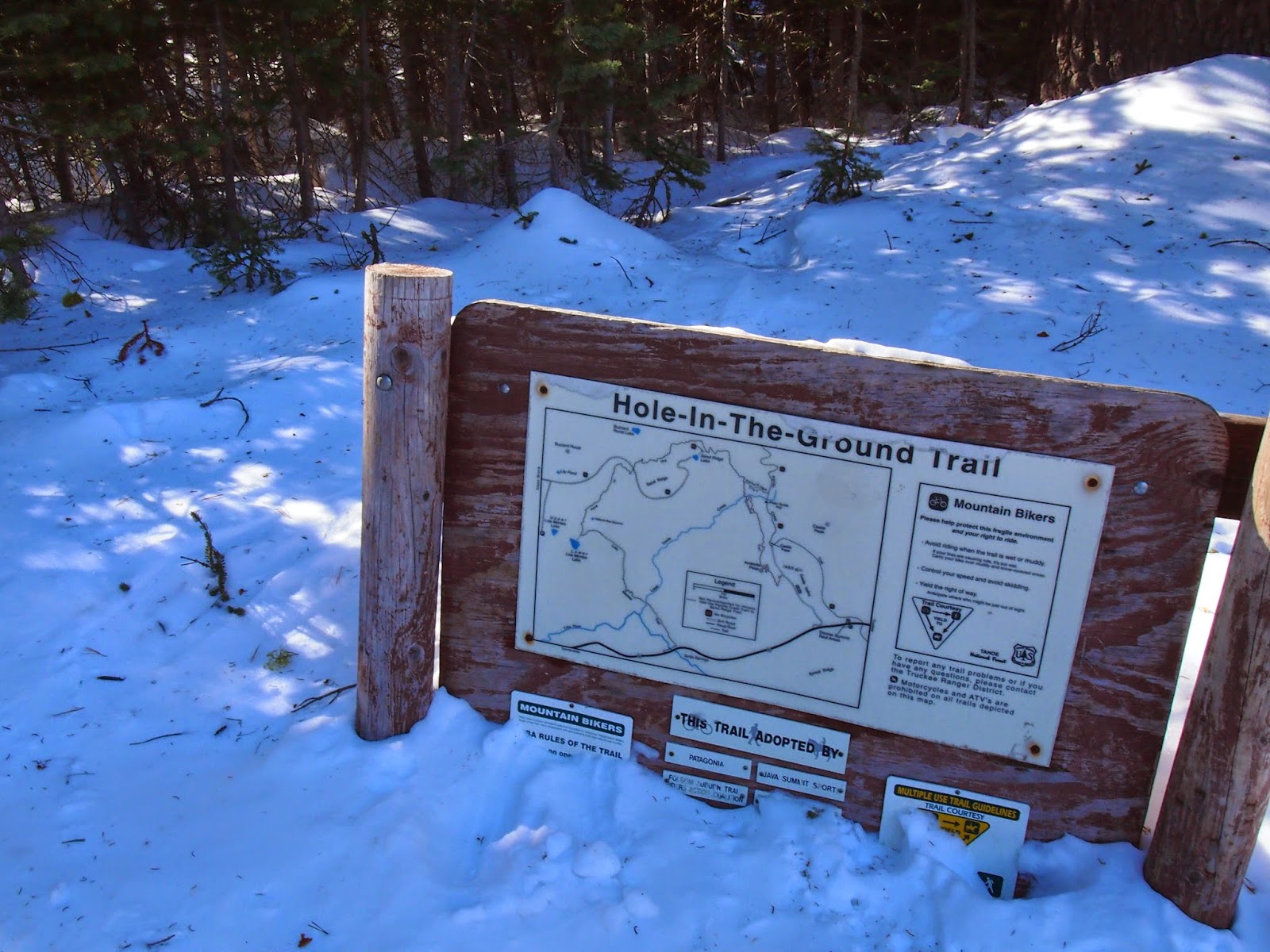 The connector trail eventually reaches the PCT at Castle Pass at 7880 ft and a short hike above the intersection resulted in some very nice views. 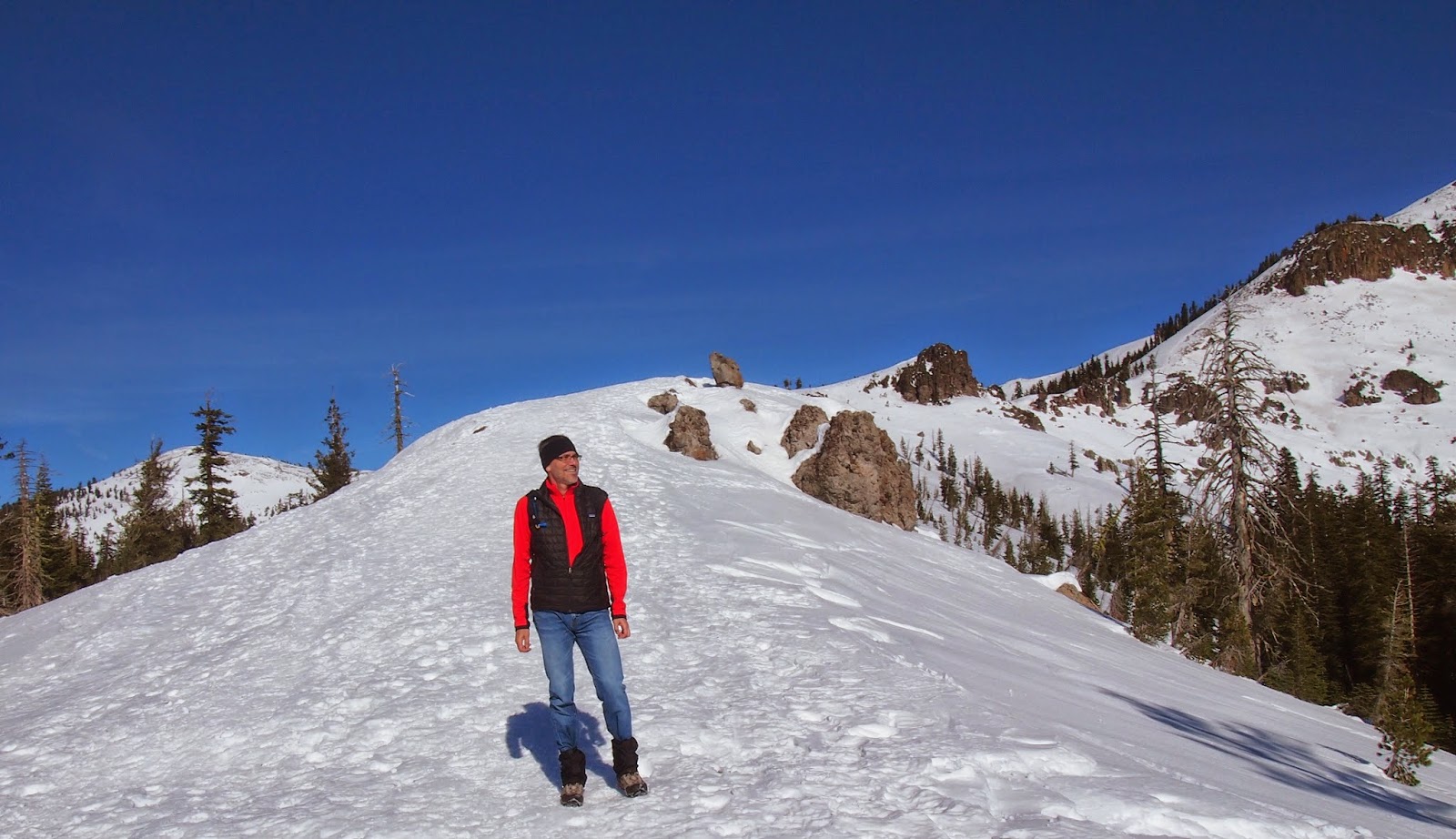 One possibility here could be riding a snowmobile trail shown on the map below, but it seemed fairly steep at the bottom and it is an out and back trail. 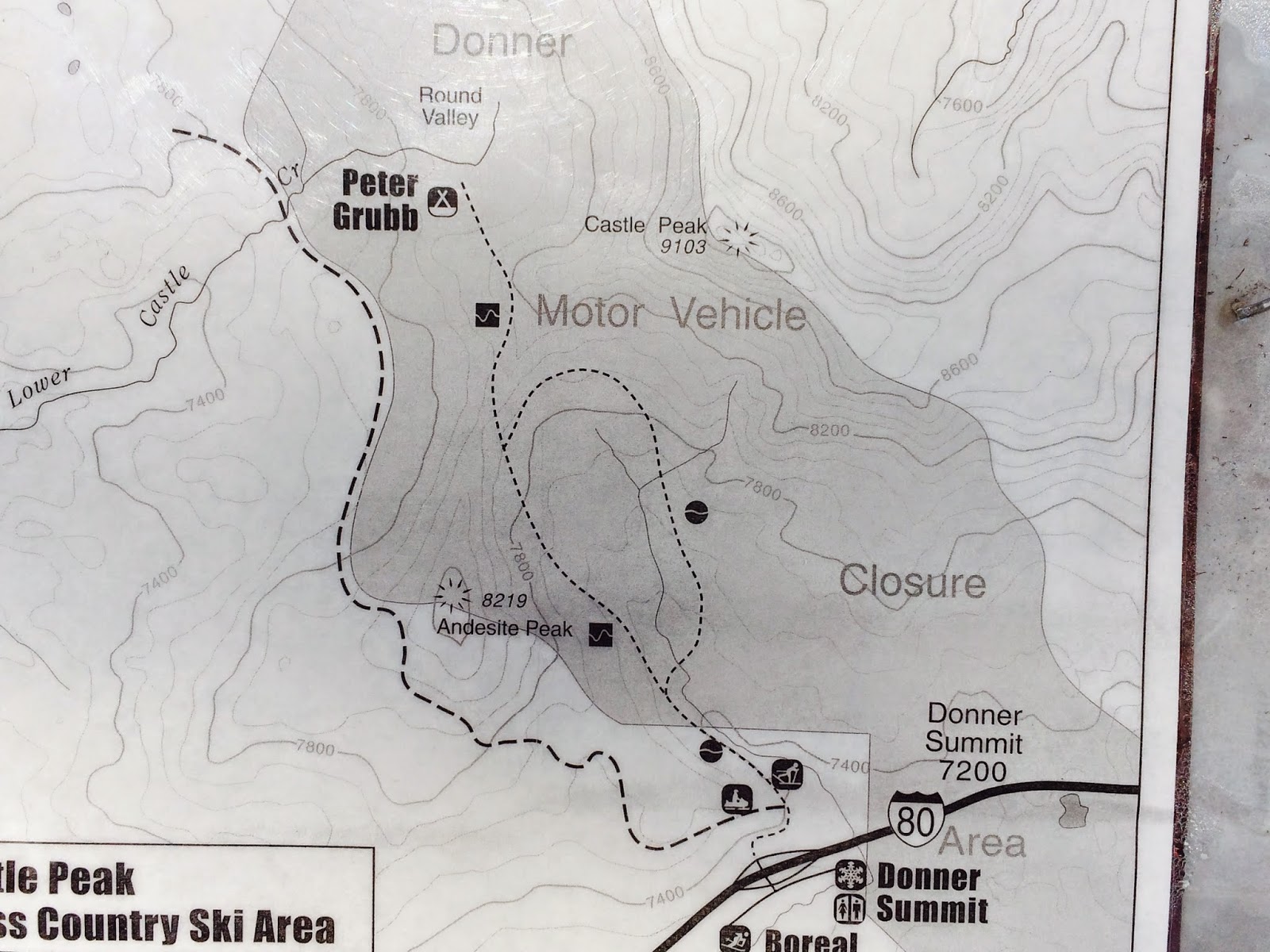 So since my fat bike days in Seattle, this was my first foray into the Sierras on a snow bike. Soda Springs trail is very beautiful and under the right conditions, it could lead to a longer (or much longer) ride, although it goes through some very remote areas with few possibilities of reaching roads if needed. Donner summit is hopeless for fat biking, except the power line trail between Sugar Bowl ski resort and Royal Gorge. Royal Gorge XC has few loops open to fat bikes, but all of those were closed at this time, and riding here requires a $27 trail pass. There may be some more trails between Tahoe City and Truckee, but I think that local knowledge would be essential for having fun on a fat bike around Tahoe. Let's hope that there will be more snow and chances to explore the vast area during the winter of 2015.