The Battle of Titans

I sold my Ibis Mojo 26-inch wheeled bike last week. I cried. Heck, would not you cry over losing a bike this pretty? 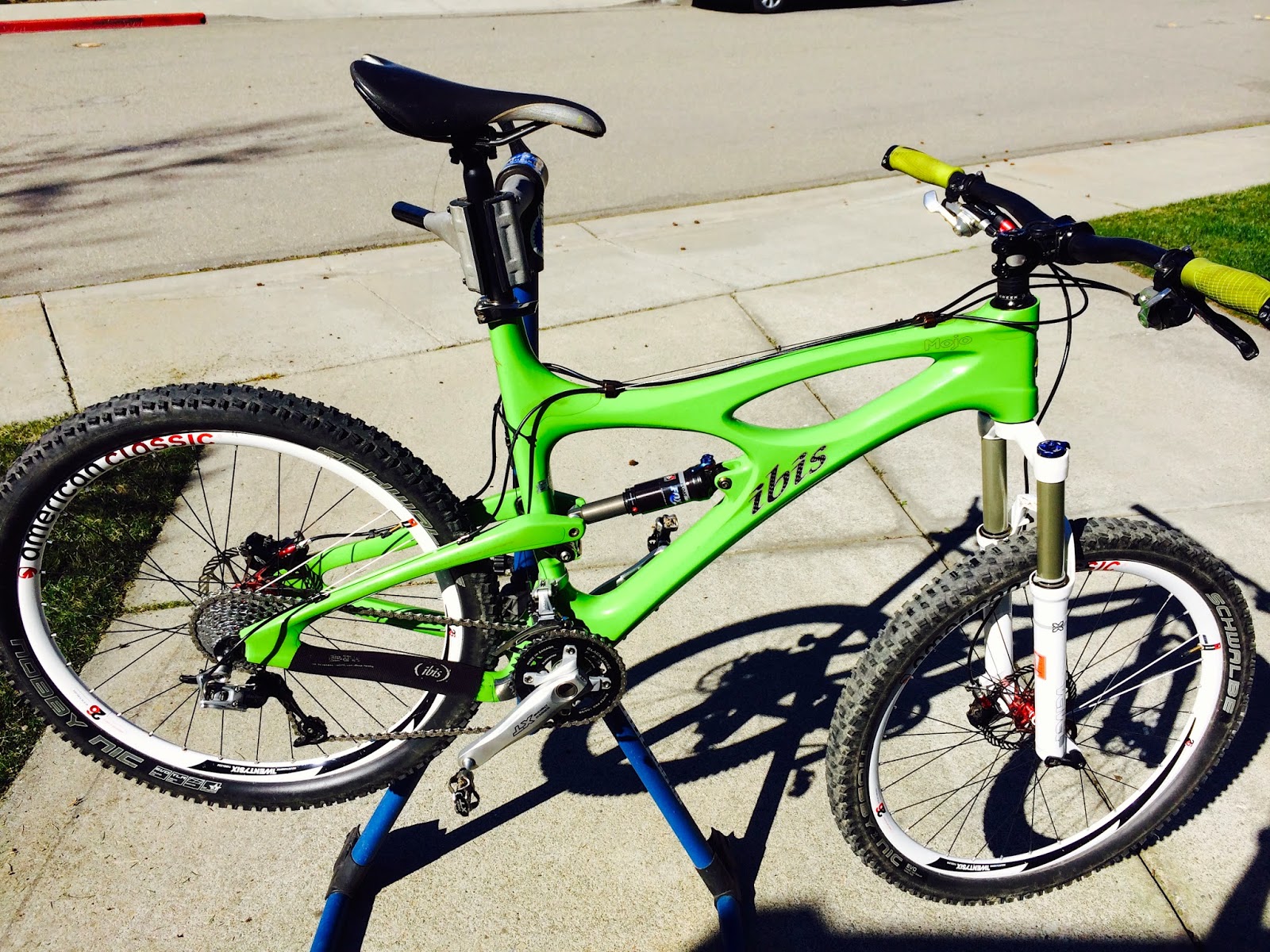 This is the bike that traveled the world with me: MTB Himachal in 2008, Beskydy Challenge in Poland in 2010, BC Bike Race in 2011, more riding in BC, unforgettable rides in Washington state, and eight years of fun on California trails.
But progress cannot be stopped and I simply believe that 29" is the right size of wheels for me. Big wheels are on my hardtail and the fat bike as well (26" fat rim + huge tire = 29+). So it was time to look for a new bike - a full suspension trail 29er. After hours spent poring over bike websites, forums, reviews, spec sheets etc., I narrowed the final contest to two models: Ibis Ripley XO1 build and Specialized Stumpjumper FSR Evo Carbon Expert. I admit, I started the whole selection and comparison process hugely biased towards the Ripley. I like modern, clean designs and the Ripley is a piece of art. The other bike's name is so long, you forget what you wanted to talk about when you actually say the whole thing.

Looking at geometry numbers, it was clear that I should compare Ripley XL against Stumpy L or XL - some numbers suggested large, others extra large. Clearly, the Stumpy is a much bigger bike. An opportunity presented itself in the form of Passion Trails bike shop demo event, they had both bikes available for test rides. Proximity of the bike shop to my old home turf at Water Dog was really nice, too, since I could ride the same loop on two bikes without thinking about navigation during the first test.

Test 1: Ibis Ripley
Setup: 2x10 XT drivetrain, Fox 34 140mm fork, Fox CTD shock, Ibis carbon 941 rims, Schwalbe Nobby Nic (F) and Racing Ralph (R), KS Lev dropper post. Note that Ibis does not sell Ripley with these components.
On the road ride from shop to trails, I immediately noticed two things: how light the bike felt and a very upright position. On the trails, I felt like sitting too high. My test loop started with some steep climbing and here I just could not believe how well the bike climbed. Unreal, no need to use the T setting on the shock, I left it fully open. The only disturbance on this climb was some creaking from the bearings (Ibis rep said they were on their 3rd design of bearing bolts and eccentrics to reduce creaking, but this DW design puts extreme load onto the bearings); as well as terrible noises coming from the seatpost head. On rocky downhills the bike felt good, but I had to concentrate on picking the right line. Series of tight downhill switchbacks were easily carved without much need for unclipping the inside pedal. The uphill corkscrew on Finch trail was almost too easy. Returning back on John Brooks, I hit a small ladder over a tree root, a feature I had ridden over countless times before. The bike front popped up over the lip and before I knew it, the front wheel landed on the side of trail and quickly washed out down the steep slope. Half endo and landing on face and all fours in a dense poison oak brush followed a millisecond later. Not a bad crash but totally surprising at an unexpected spot. And yes, I dropped the chain once.

Test 2: Specialized Stumpy (by now you know what bike I talk about)
Setup: 100% stock, 1x11 SRAM X1/X01 drivetrain, Rock Shox Pike 140mm fork, Fox CTD shock with autosag, Alu 29mm wide rims, Spec tires Butcher (F) and Slaughter (R), Spec Command post.
My first impression on pavement was that I was riding a chopper bike after seeing the front tire rolling what seemed like a long distance in front of me. Second impression was of remarkable acceleration after each pedal stroke. Then I realized that my position on this bike felt completely natural, that is I did not actually realize any change in position over what I was used to before. Temperature rose about 5 degrees by the time I hit the first climb compared to three hours ago, I had to sit on the nose of saddle, but remarkably, the bike powered up series of steep pitches with no tendencies for floppy front, no signs of rear tire slip. It just felt a bit harder than on the Ripley. Oh yes, another shocker: there were absolutely no sounds coming of this bike. No chain rattle, no creaks. Just thumping of tires and wind noise in my deaf ears. I approached the downhill switchbacks expecting the need for dabbing down and more body English, but as far as I could tell, my tires followed the exact path I took on the Ripley. Lowering the seat post to the middle position was difficult - the saddle always dropped all the way and only locked in the middle upon rising. No shifter on the left bar allowed for more fiddling with the dropper lever, which is designed really well. The twisty Finch uphill required a bit more room for the front wheel to arc around, by now I felt pretty tired, but made the climb without a problem, just wishing for more supportive saddle. On the downhills, the bike was an absolute blast and I went over the crash site ladder barely noticing it.

The rides by numbers: 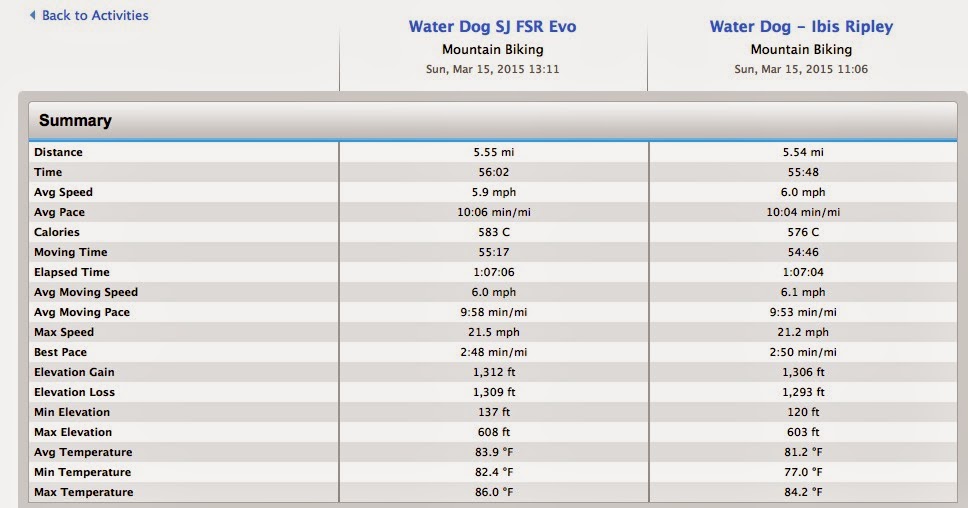 Winner by the numbers: Ibis Ripley. I was 31 seconds of moving time faster on the Ripley. That would seem significant on a 5.5 mile loop that takes an hour to ride. This could translate to 3.5 minutes during a 7-hour bike race stage! Upon closer look, it surprised me how close all the numbers were on these two rides. That means I am a consistent rider and also there was no real difference between these two bikes judged by these results.

Here is the test loop:

Winner by the $$$: Stumpy hands down at $5900. Similarly equipped Ripley, although with carbon rims and a fancy cane Creek shock costs shocking $7300.

Final verdict: The Ripley represents Silicon Valley innovative thinking and artistic design of a small company, whereas the Stumpy is a product of refined engineering of an industry giant. I usually prefer to spend my hard earned bucks with a small guy who tries to make it, but in this case, the uncertainty about making friends with Ripley were just too much for me to accept. I plunked a deposit down on the Stumpy and I look forward to take my new bike through a test of relationship this summer.
Posted by Unknown at 9:07 PM 1 comment: