How (not) to become a dogmeat 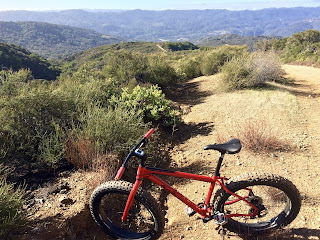 I wrote a post about trying to ride close to Mt. Umunhum in 2012. That time, I did not get very close and since then, I mostly forgot about this area, somehow Sierra Azul area did not excite me as a place to go mountain biking, since it is all fire roads and brutally steep on top of that. We have abundance of that in East Bay, thank you.
I have been planning a fat bike trip to the areas covered in snow, but this weekend turned out to be still very active snow storm in the Sierras (4 ft in 4 days!!!) so I chose Sierra Azul as a quick drying substitute to test my fat biking fitness, or as I was keenly aware, the lack thereof.
When exchanging emails with Jill on Friday, she alerted me to the fact that a section of trail here has been long subject to an unofficial "no-dab dogmeat" competition. I had no intention to participate but I was curious how steep the trail really was. I climbed from the Lexington reservoir on Limekiln trail, which I like because it is shaded and with a bit of imagination could be called a rocky one-and-half track. At the intersection with Priest Rock trail, there is a little plateau and a sign that says Kennedy trail 1.5 mi. This is where the storied dogmeat apparently begins. After the first steep section, I not only dabbed but had to take a few minutes break. After the second steep section, the break was longer. The third (insanely) steep section, I pushed the bike up while a rider coming down laughed aloud. I thought I could not rest long enough after this part to ride the last, short section to the high point. But I somehow did (ride it).

On the elevation chart above, Dogmeat is between miles 2.5 and 4. What I learned on this climb is that for me, there are these factors that will likely never allow me to score on this hill:
1. Cardio fitness: who likes hill repeats? But I'm thinking about riding at Mt. Diablo more often next year
2. Dumb leg strength: see point 1
3. Balance and steering at low speed: fat bike geometry with its short chain stays and raked out fork is terrible for hills this steep
4. Tire traction: I had plenty of that, no excuse. After recent rains, the surface was dry but all loose stuff was washed away. But there were deep ruts (see point 3). Fat tires with 8 psi = zero spin out. The flip side is the 40 lbs fat bike.
5. Weather: better try this on a 45F day, not in the summer.

Past Mt. El Sombroso, I found Woods Trail which I never rode on before. It looked quite interesting with one exception: it was downhill. The trail direction seemed to point closer to Mt. Umunhum and I decided to ride downhill for a while to explore. I did not have a paper map and Gaia showed too many trails around Mt. Umunhum to sort out, so I cruised down enjoying carving turns at high speed without the danger of washing out, until I came to senses and realized that in order to get back, I would have to climb out of this valley.
At this point, I was as close to "the box" as I ever got but also too far below. I recalled the internet stories about marijuana growers, ATF raids, "extreme conservationists" guarding the mountain and shooting at unwelcome visitors. The slopes of the mountain are one remote place for sure and some deep ravines looked like it could hide lots of activities worth "extreme conservation." Mid Pen is planning on opening the summit to the public next year though, after lots of environmental cleanup. 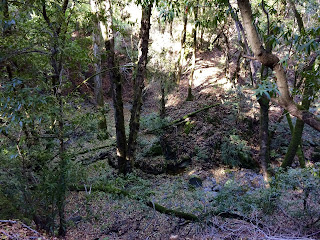 The climb back was not too bad until the steep part close to the ridge, where I got severe cramps in both legs. Walking usually helps me, but despite gels, electrolyte drink and walking, the progress was slow. 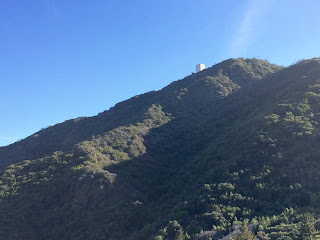 After very slowly rolling over the ridge, I started the descend on Limekiln trail, which has grades manageable for descending and finished the ride on the technical section of the trail going faster than I should, for a total of 20 miles and 4,898 ft vertical. Back at the reservoir, I was a complete dogmeat, luckily, there were no dogs around.

Posted by Unknown at 8:42 PM No comments: