Jan's B-Log was intended to mean Bicycling-Log, but since I am a biotechnologist, I think it is OK to change subjects from time to time, so this post has a Bio-Log-y theme. But as you will see, it is bicycling related, or more generally, exercise related.

A couple of weeks ago, a paper in the journal Nature has described a discovery of a new peptide hormone, called Irisin: Boström, P.; Wu, J.; Jedrychowski, M. P.; Korde, A.; Ye, L.; Lo, J. C.; Rasbach, K. A.; Boström, E. A. et al. (2012). "A PGC1-α-dependent myokine that drives brown-fat-like development of white fat and thermogenesis". Nature.
You can read more about Irisin here, here, and here, but the long and complicated biology story is that this hormone is induced by exercise, triggers browning of fat tissue, and elevated blood levels of this peptide promote energy expenditure even in absence of movement or food intake. The authors suggest that this molecule could be prepared as a theraputic for metabolic disease and improvement of glucose homeostasis (states typically leading to type 2 diabetes).

This breakthrough publication reminded me of one day in 1996 when my boss and I drove to Vienna to hear a lecture by Jeffrey Friedman, who discovered the hormone leptin in 1994 at the Rockefeller University. Leptin was thought to be THE cure for obesity, mainly based on the fact that mice lacking a gene for this hormone, so called Ob-/Ob- mice eat voraciously and quickly become morbidly obese. 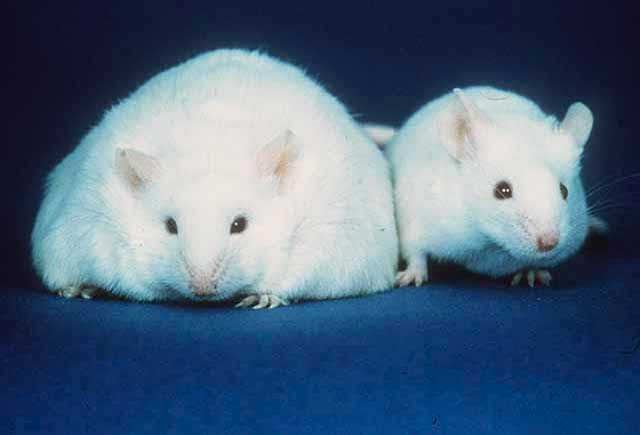 After the Vienna trip and talk, I spent two years preparing antibodies against the leptin peptide. As it turned out, mice are not little men and the leptin story proved much more complicated than thought at that time, thus no miracle obesity pill resulted.
There is also a business part to this story: the biotech / pharma giant Amgen paid $20 million to Rockefeller U. for drug rights on leptin. And there is a company called Ember Therapeutics who got $34 million of venture capital to turn Irisin into a drug.
I am not against turning scientific discoveries into medicines, that's what pays my salary and allows me to ride nice bikes. But I do not believe it is possible to take large amounts of energy (food) in and then get rid of it by taking a pill, without our body burning or lighting up or something like that. And I also think that the cure for type two diabetes already exists: every doctor will tell you that diet and exercise will lead to improvement in at least 90% of diabetics. But it is the HARD way and nobody wants to go that route. Wait a sec, nobody, really? On my weekend bike rides and runs, as well as during commuting to work by bike, I see plenty of people who would not exchange their way of staying healthy and having fun for any pill. I am also sure all of us would prefer the side effects of running or biking (blisters, sore muscles and bruished shins) over the yet unknown side effects of Irisin.
And just imagine how many new trails could be built with $54 million....

Posted by Unknown at 6:12 PM No comments:

Point-to-point on the Peninsula

Most bike rides and runs people do are probably loops, which makes perfect sense. Point-to-point routes are difficult, usually require two cars or a drop-off or a pickup. When I used to do XC MTB races in Connecticut, I did not enjoy riding course laps too much. That is also why I really like stage races or events, where the route is different each day.
Living in the Bay Area allows us to vary our running or biking routes a lot, both my wife and I really like the fact that we can leave our house on bikes or on foot and come back many hours later. But if you look on the map of trails and preserves along the Peninsula, it is clear that long point to point routes are possible. So to change things a bit on this ridiculously warm and sunny January weekend, we tested how far our wheels or legs would take us.
My first test: mountain biking from a far point home. Starting point: Steven's Canyon county park, intersection of Steven's Canyon and Pierce roads. Target destination: Old Post on Tripp Rd in Woodside. I did not plan the route exactly trail by trail, hoping I would choose what felt best along the way. After a warmup on Steven's Canyon road, I continued on the trail uphill, took Grizzly Flat trail to Skyline, where I found the Ridge Trail closed. A hundred yards or so along Skyline to the north allowed me to join the Ridge trail north with no closures. This is the route I have ridden so many times, Ridge Trail, Chestnut trail, swing through the Christmas tree farm to Horseshoe Lake. There I found the White Oaks trail closed, which was a real bummer. My original rough plan was to connect to Alpine trail and Peter's Creek, thus avoiding the grueling climb up towards Russian Ridge. Left with no choice, I made it over the ridge to Alpine Pond but Ancient Oaks trail was a reward for this climb. Continuing along the Ridge Trail all the way up north to Rapley Ranch road spits you on the Skyline Highway at the Fogarty Winery, with no legal trails until Skeggs.
I cursed the San Mateo Parks and recreation while I pedaled on Rt 35 towards Bear Gulch Rd (west). San Mateo county is notoriously known for their anti-biking policies, similarly to towns of Woodside and Portola Valley, which would be a topic on its own for another blog post.
Finally, probably the best singletrack of Skeggs, Blue Blossom Trail! I almost forgot I had to dig myself up from the ravine, but was rudely reminded of that on Gordon Mill trail. At this point, it was clear to me that riding more trails through Skeggs and connecting to Purisima Creek was too ambitious, as the temperature was dropping and I was cold, hungry and pretty spent. Back to the asphalt on 35 and downhill on Kings Mt Rd to the meeting point, where I arrived frozen to the bone (and this was a 66F "winter" day).

Day two: with biking muscles sore, Marketa and I came up with this leapfrogging scheme: I would drive to Huddart Park, leave the car there and attempt to run trails to Wunderlich Park. She would take off from home and pound pavement (her preferred way to move in space) to Huddart. There, she picks the car and drives to Wunderlich, to check if I would appear there in some reasonable time or if the rescue squads would already be combing the woods. On paper, it looked like it would take us similar amounts of time.
The run from Huddart Park to Wunderlich is a part of the annual Woodside trail run organized by Pacific Coast Trail Runs, but of course, these tough guys run it there and back as part of their 35 and 50K courses. This run is basically a really nice uphill climb through redwoods on Crystal Springs trail, thean along the Skyline on Skyline Trail, through more redwoods, crossing Kings Mountain Road and following the ridge to Wunderlich. From there, it is 5 miles, all downhill. Looking at the map, estimated 13-14 miles. This is more than I have ever run since the 2010 Kauai Half, but with couple of recent runs around 10-11 miles, I thought this would be doable for me, especially with the easy downhill at the end. In that, I could not have been more wrong. I enjoyed the first uphill part, really loved the remote and solitary feel of the Skyline trail (despite couple of low energy / morale points), but suffered mightily on the downhill (I forgot legs are not wheels!!!). I have never experienced this much pain on a bike, I cursed myself for this idiotic idea for the whole 5mi section. Timing worked perfectly, Marketa had to wait for me about 10 minutes. Her 13 mile run was "as usual" good, no biggie for her. I ran the longest distance so far, 14.4 mi (according to my Nike watch and maps, the Garmin gadget lost his mojo before I did and somehow shortened the mileage, see below). It is now manually edited.
So overall, between Marketa's and mine routes, we covered about 56 human powered miles of the Peninsula hills. It would be nice to do it again without the need for driving!

Posted by Unknown at 4:31 PM No comments:

A little bigger slice of Coe

I am a complete Coe (Henry Coe State Park) novice: I was there on my bike just once before (Oct 2, 2011). There are probably number of riders in the Bay Area who love the place, as documented by many quite well maintained singletrack trails. Then there are the Coe-nuts who ride 10K vertical, 100mile rides and attempt to climb an equivalent of Mt. Everest in a single ride.

On my first solo ride at Coe, I realized that I will have to start taking Coe in small, carefully measured doses and really think beyond the bike ride much more than any other location (weather, water, creek levels, poison oak etc.).
Today was a day which begged for another prescribed dose: sunny, bright, chilly, three days before the rains were supposed to come, and most of all, a friend willing to explore new trails. 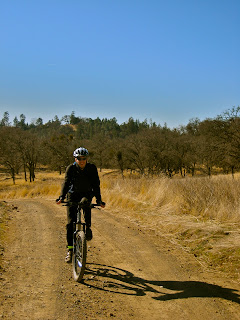 Pavel and I started the ride at the park headquarters, enjoyed the nice flat Flat Frog (duh!) singletrack and braved the exposed and sketchy downhill on Middle Ridge. 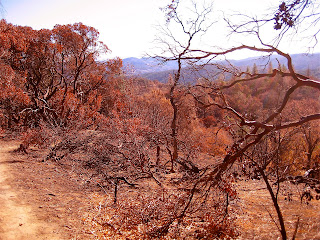 The remains of controlled burns and many downed trees (but all removed by rangers or trail volunteers) made this trail look quite a bit different from what I remembered. After reaching the creek, we tried to avoid my last ride's mistake of following the creekside "trail" and decided to extend the loop to Jackass Ridge and Los Cruzeros. From there, we climbed the Lost Spring singletrack and descended the wide grin-inducing China Hole singletrack. But this three mile extension cost us dearly in leg power, because it added about 1500 vertical feet. 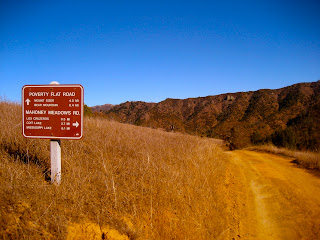 The final climb up from China Hole to Manzanita ridge was painful, despite the great views. Coe hurts, for sure. There is no other cure than a repeated, preferably larger dose (5, 6K vertical?). Let's hope for a nice dose response. Oh, as far as the popularity of Coe, we saw one other rider today in 4 hrs. Garmin track here.
Posted by Unknown at 8:49 PM No comments:

So here we go again, just for the record, my overall cycling mileage and vertical.

Posted by Unknown at 8:10 PM No comments: