Two days to race start. Today's drive through northern Oregon was not all that interesting. I was curious about Portland, but passing through on a freeway gave me impression of gloomy, dark city, with rain stricken facades and ugly steel bridges. I guess one would have to dive into the city scene.

Similarly in Washington state and Seattle, nothing that really caught my eye. It was overcast with numerous showers, all mountains were covered with clouds, overall pretty depressing picture. Lots of woods around, though.

Canada welcomed me with bad traffic jam on Trans-Canada Highway 1, there was construction everywhere. Finally, I got to North Vancouver, navigated GPS-less (no Canada map in the trusty Mio, although it is supposed to have it!?) to the hotel. It is on the waterfront, an old shipyards area undergoing extensive gentrification: 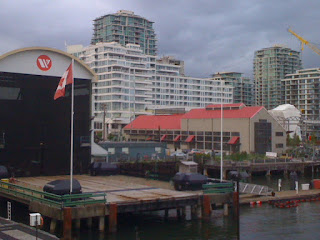 The views from the Quay Market were pretty awesome, much better than Italian dinner I had in one of few places still open at the market. On the way back to hotel, I found a small street with great looking Greek, Italian and few other restaurants, so I will check them out tomorrow (Canada Day). 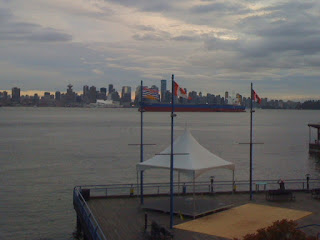 Posted by Unknown at 9:28 PM No comments:

The British Columbia Bike Race starts on Saturday July 2nd, but since there will be no race stage on Saturday, they call it Day Zero.
I took off on Wednesday at 7am which makes it Day Minus Three. All packed up, Mojo on the roof. I drove for 10 hours and made it to Eugene / Springfield, Oregon. Oregon is a pretty state, reminds me of Vermont. People must be nice, too, because everybody drives at the speed limit and drivers change lanes to let others pass (unimaginable in the Bay Area!), they won't let you pump gasoline by yourself, and have a DWD (Dying With Dignity) Law. A perfect place!
Posted by Unknown at 6:30 PM No comments:

The weekend before leaving for the BCBR should have been off bike, but then I got the Mojo all spruced up by the (I hope) good mechanics at the Passion Trails Bike Shop and had to take it out for a test. I rode the double-roller coaster ride at Purisima and the bike felt great.
I actually think the trails may be somewhat similar to what's awaiting me in BC? 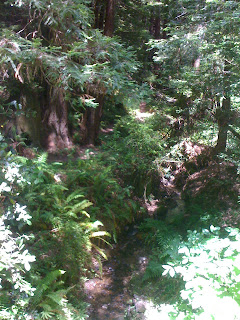 I climbed the Grabtown Gulch from the bridge to Tunitas Rd without stopping and then descended the Borden Hatch Mill Trail and up Whittmore. The bottom parts of Whittmore Gulch Trail have been "sanitized" and the rocks removed. I actually liked the tacky trail surface, it helped when climbing up some of those grueling inclines. 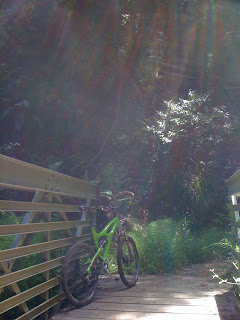 On Sunday, I did an out and back on the Cahill-Fifield trail (17mi) with two fast riders on the 29er. Great weather, views and company.
So 8,000 ft of climbing as a polishing workout before the race. I was sore Monday but OK on Tuesday, so perhaps it won't be so bad.
Posted by Unknown at 6:24 PM No comments:

The Best Bike in the World

I admit, I browse the internet in search of the bike porn quite a bit. I have no intention to replace any of my three bikes soon, but like to see how the technology's evolving.
My wife generally does not share this passion (aka obsessive behavior) with me and her road bike has been gathering dust since we moved to CA. I totally understand that, her weekly running mileage (50-100mi) does not leave her much time for bicycling, and the terrain around here could be considered "expert", with lots of steep hills.
So imagine my surprise when she asked me if I thought there was a bike she could ride to school on a combination of pavement and dirt paths. I started immediately web searches and fantasized about belt drive, internally geared bikes (something I wished I had myself in my stable) but then decided her new bike should be a 29-er hardtail with a low stand-over height and decent components.
Turned out, there were not that many bikes fitting this description, I finally narrowed the selection to Specialized Myka Expert or Giant Rainier. The second surprise came when I checked with about fifteen Specialized dealers within a 25 mile radius and none of them carried the bike at all, not just in my spec and size selection! They were all willing to order the bike upon a deposit, but that somehow beats the purpose of seeing before buying? I finally found Evolution Bike Shop in Cupertino and these guys were willing to order the bike with no deposit and no obligation to buy. In a week, the bike was ready as promised and we went for a test ride. She liked the bike immediately after a spin around the parking lot so we we brought her (Myka) home.
When my wife took the bike out of the garage the next morning before breakfast in her pajamas for a 3 minute ride around the house, I started to suspect something was up: 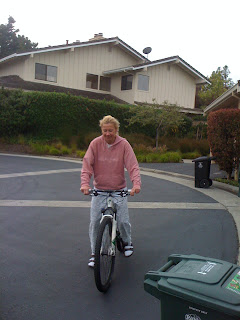 OK, it is actually a nice bike: a sculpted M4 aluminum frame, Shimano components (shifters, derailleurs, hydraulic disk brakes, hubs), Rock Shox Tora fork, 660mm wide straight bar, Specialized Captain Control 2.1 tires.
I like couple of things: cable / hose routing under the top tube (I always hated the way Spec bikes route all cables and hydro hoses under the down tube and bottom bracket), full housing rear derailleur housing, even rack eyelets on seat stays!!! Well, the saddle and grips are girly white but at least they are not pink. 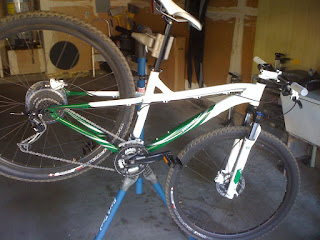 The only issue is the bike weight: I don't know it but it feels heavier than both of my XL size mountain bikes. I guess none of the big brands came up with ways to make the women specific bikes light enough in this price category.
Here comes the"best bike" part: my wife has been riding her bike to college pretty routinely and she has been excited about how well the bike feels on a pretty rutted dirt path through the Waterdog Canyon. She has even included a singletrack section in her commute! So after five years, I found the world's best bike for her, there is no other explanation.
I guess the big S figured this out, too since in June they launched a fancy carbon race version of Myka called Fate. It is supposed to be lighter and will cost three times as much.
Posted by Unknown at 8:25 PM No comments: