Enough has been written about the BC Bike Race in various magazines and blogs. The bottom line is that I finished the seven day stage race in 69. place in Solo Masters Men Category in total time of 34 hrs 17 minutes.

This race was very, very hard for me for several reasons. The first and foremost being quite unprepared for what the "BC singletrack" really is: steep, twisty, loamy, sometimes rocky, but mostly slippery root-infested, but most beautiful trails in the world. There was probably nothing that I could have done before the race to practice skills of riding slick roots other than riding in BC. I had enough power but no style or technique. On Day 1, I rode hard, landed many drops on steep rocky descents and ended up with badly inflamed left forearm tendons. So on Days 2-7, I rode with my left hand immobilized in tape which stabilized my wrist but the control of the bike suffered and I crashed a lot and ended up walking many downhills because I could not take the landings. Honestly, I don't think I would be much faster with a good hand. I thought that by the end of the race, I somewhat got the hang of powering through the roots in the middle chainring, off the saddle and picking the sides of turns while leaning my bike more aggressively to let the side knobs of my Schwalbe Nobby Nics to bite. I ran 30 psi with tubes and these tires are the choice of locals for this terrain so no excuse here. There were skilled riders who used Kenda SB8's and did well. 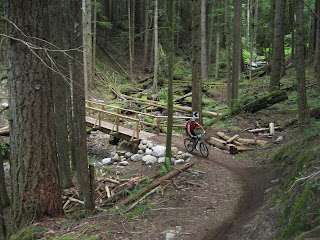 About a month before the race, I read Dirt Rag's Eric McKeegans article about the 2010 race which said that using a full suspension bike was best for this type of trails (true), but also said "there was nothing I wouldn't ride on a standard XC hardtail".....  there were about 20 out of 500 riders on hardtails and except the really fast guys whom I actually never saw riding since my very stable and solid position at the end of the pack, these guys walked a lot and suffered. I don't doubt Eric's skills but his 2010 time of 29:37 suggests he must have done a good deal of hike-a-bike with his FS 29er. Another misinformation in the above article was that water bottles and a seat pack would be enough to get you from aid station to the next.  In theory yes, but the mandatory gear which could be subject to random check any time took most of space in my Camelbak Hawg. Just thought I would set these couple of things straight.
Overall, this race was an amazing experience in many ways, from beautiful natural scenery, well designed and maintained trails to meeting many interesting people. Yes, Canadians are very friendly people in a "normal" way (as opposed to sometimes fake joviality practiced in the USA) and Canada is a country from which its southern neighbor could learn a lot, not clear to me why they don't and make all efforts possible to ignore Canada's existence altogether. 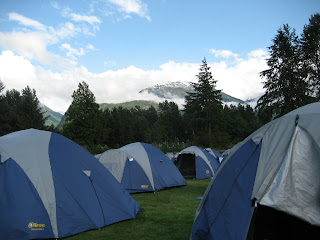 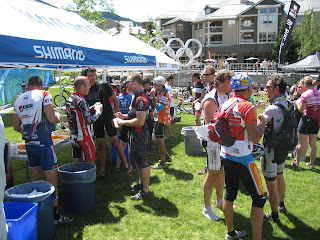 While I was really glad the sufferfest was over when I rode through the finish gate at Whistler, I know I will remember the trails, bridges, moss, fern, lakes, mountains and trees (roots included) of British Columbia for ever and likely will be back one day for more mountain biking. Now I guess I have months to plan something similar for next year.
Posted by Unknown at 10:14 PM No comments:

Having the morning free, I hopped the SeaBus ferry which has a terminal 5 min from the hotel, for a 15 minute ride across the Burrard Inlet to downtown. Around Canada Place, preparations for the Canada Day were in full swing. 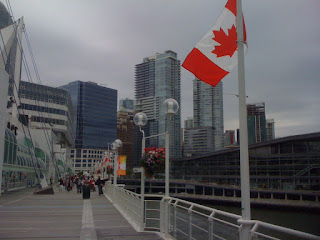 Early afternoon registration went smoothly, it was all well organized and considering the number of people signed up for this race, no wait times. I checked the Mojo in hoping to reunite on Sunday morning. I spent the afternoon trying to break some laws of physics when stuffing all my worldly possessions into the Dakine racer bag which was of course about 30% smaller that the one I brought all my stuff in. With leaving behind some "nice to have" items, the zippers finally closed.
I had some time to kill so I went out for a stroll around the Quay Market. The market was busy with vendors and music. The sun came out and people were just having a good time. 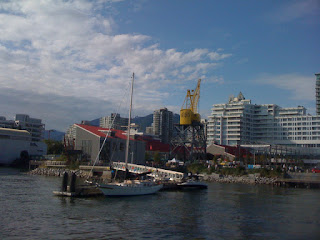 The atmosphere felt somewhat different than 4th of July in the USA, very spontaneous. The truth is I don't really remember "celebrating" the Independence Day since we always use the Holidays for some trips, but you know, everybody must grill some lousy food and watch the fireworks and exclaim how much fun they are having....  Here, I watched a band of kids making some serious noise for an hour and felt young at heart again (!). 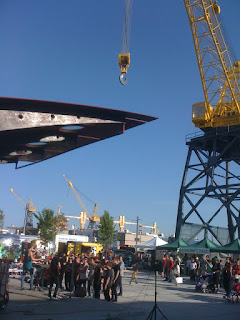 The waterfront with historical Wallace shipyards it being turned into a history park with art shops etc. It felt really modern and livable. 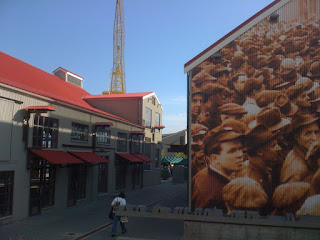 OK, so this is it for pre-race vacation, the BCBR starts tomorrow officially as Day 0 with a briefing and transport to Campbell River, our home for Days 1 and 2.
Posted by Unknown at 7:52 PM No comments: