On Thursday, The Turkey Day, the 2011 nine weeks long uphill race series called "Low Key Hill Climbs" culminated with the last and longest uphill battle to reach the summit of Mt. Hamilton. The races took place every Saturday morning at various roads around the Bay Area. The races had several things in common: volunteers who did a great job in herding all the nervous roadies at the start and finish lines, the racers themselves (the usual Bay Area roadie crowd, whatever that means), beautiful local small roads, all pointing quite sharply upwards, and a rain free weather. One thing that none of the races featured, despite the name, was anything low key. Sure, there were no large number plates, no podiums, no prizes and no speeches, but these were fiercely competitive events, with the top guys and ladies achieving quite unbelievable times and ascend rates. Overall results are posted to a great detail here. 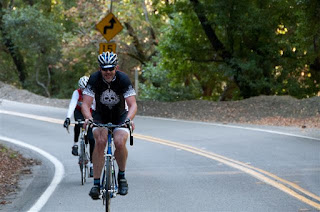 As for my "goals" for these races, I thought these may be a good opportunity to keep my legs in shape during the fall season, when days get shorter and weather may make it harder to get out and ride. Secretly, I also thought it would be nice to be able to do all nine weeks. There were also several locations I have never ridden before (Sierra Road, Palomares, Mix Canyon, and yes- Bohlman etc. Rd). 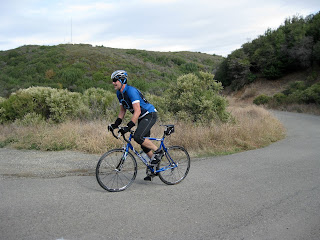 To make the nine weeks-long story short, I managed to participate in all nine events, thus earning a membership in the exclusive 100% club. It was not easy, I suffered on several climbs mightily and was reminded on weekly basis of how many super fit people live in this area. My face burned on the sun exposed section of Page Mill Road in a 75F weather, I froze my ass off on the way down Highway 9 after the climb, bonked twice on Bohlman and Mix Canyon, and got soaked wet and punctured on the way down from Mt. Hamilton. I also got to meet my friend Martin whom I raced with at the BCBR, and his family, in Vacaville. 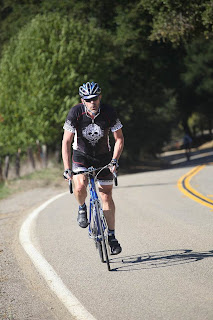 So, by mere participation, I earned slot # 71 out of total 326 riders who scored, and finished second at the Endurance Award, which I interpret as someone who has accumulated the longest time (my overall time was 38 minutes shorter than the winner's)! Here is a summary table with some numbers:

The pedestrian / bicycle bridge over Highway 101 in Belmont finally opened on Saturday November 19. From what I read online, the idea was first proposed about ten years ago, construction approved and planned by city of Belmont in 2009, first scheduled to open in June 2011 and after one false broadcast on the web, opened in November.
This bridge crosses Hwy 101 just north of the Ralston Avenue overpass and connects to the Bay Trail at the Belmont Sports Complex on the eastern side, and drops you off onto Ralston at Hiller St. west of 101.

It will allow access to the Bay Trail at Oracle, as shown on the picture below, with possible (even though not very easy) access to San Carlos Caltrain and points south. 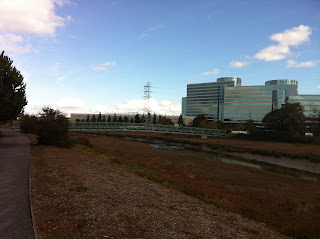 On the Belmont side, entering the bridge means veering off Ralston and making a left turn onto Hiller, then crossing Ralston at the pedestrian crossing light signal, which should work fine. On the way west, there will be couple of blocks of heavy traffic streets with no bike lanes until NDNU. As usual, the merge of the off-bridge lane onto the street crosses the right turn only lane, so one will have to watch for mindless drivers here: 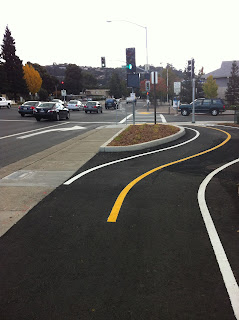 Overall, the bridge is big and ugly, as many things in this country are, and if it really cost $8.8M (this figure is not from a reliable source), I think the whole Belmont and San Carlos could have bike lanes painted on every street and perhaps even some bike-only traffic signals installed, as they do it in Holland, for example. But it is great that the bridge is here, since it will open a possibility for me to ride to work on chilly winter days when the San Andreas trail is too cold, and ride home after dark instead taking the train.
Foster City Patch has a report and a slide show here.
Here is a shaky iPhone video of my inaugural bridge crossing: