Almost exactly three years ago, I posted about our hiking trip to the Lakes Basin region of the Sierra Nevada mountains. It took us three years to return here, this time with a mountain bike. What I remembered from our last trip was the sheer beauty of many lakes scattered among granite formations, the craggy peaks of the Sierra Buttes and how remote and underpopulated the area was. In 2012, we camped at Wild Plum, a nice campground in the valley of North Yuba river. On one of our hiking trips, we discovered the Lakes Basin campground and thought it was the nicest spot in the whole area.
Fast forward to 2015. A month ago or so, I stumbled upon one and last available spot at Lakes Basin and reserved it immediately, hoping to organize a trip for seasoned mountain bikers for a weekend of fun riding. On Friday, it was just the two of us battling the afternoon traffic in the Central Valley and arriving at our camp way after dark, setting up camp with the aid of our headlamps and cooking late supper. 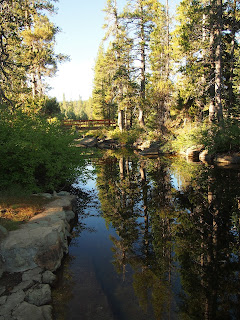 Saturday morning sunrise revealed the landscape around our campsite, as I remembered it. This campground had the advantage of a pretty swimming hole right behind our site. Grass Lake and views of the granite megaboulders were a five minute walk away. 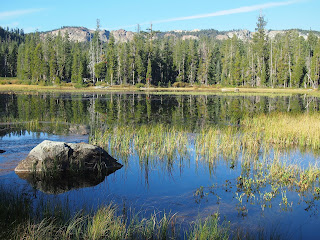 My plan for the first day was to drive to Packer Saddle and ride down the famous trails of the Downieville trail system. I was hoping to complete a loop described on MTBR by A.S.S., which included about 2000 ft climbing up Big Boulder trail. 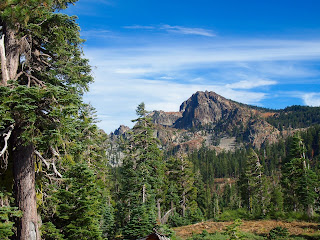 After leaving the ride start spot, which offered a great view of the Sierra Buttes, I enjoyed the swoopy and fast singletrack of Sunrise trail, with great views of the valley 5000 ft below. As the trail changed its name to Butcher Ranch trail, it became lot more rocky and technical. Here I met a group of five riders from the Bay Area, led by Tim, who used his helmet camera to document our more (or less) successful attempts to ride through numerous rock gardens. 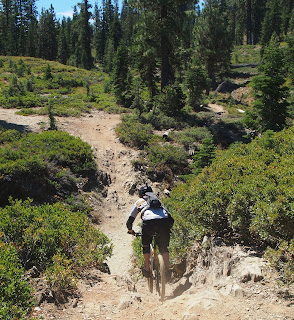 We stopped often to session some of the trail features and to take photos. Up (or rather down) to here, nothing was unrideable, just few tricky spots like the dry creek crossing which was easy to ride down but quite difficult to use the momentum to make it up the other side. 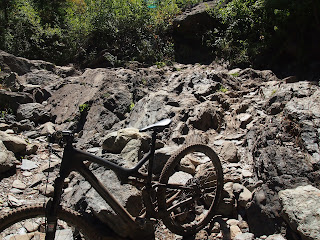 The first real hike a bike section was the infamous "waterfall", which I walked and watched others to try multiple times only to scatter their bikes and bodies among the rocks. The rock was dry now, perhaps it is easier to ride through when it is lubricated by flowing water?

At the transition of Butcher Ranch to Pauley Creek, I split off the group and started climbing up Upper Pauley Creek. This trail turned out to be very technical, especially after crossing the second bridge over a creek cascade. It became clear this was a moto trail, badly churned up, very steep and for me not really rideable. I hiked up about 50% of it for about a mile and half to a wreckage of an old (30-ies?) truck. At a clearing I could see the Big Boulder ridge still ways far and many hundreds of vertical feet above. I did not have time to continue here and make the last shuttle out of Downieville. So I had a snack, dropped the seat post and descended. Surprisingly, I could ride the whole stretch of trail, including some extremely steep sections made of pavers. I knew these from trails in WA and knew that tire traction on these pavers was perfect, after all they allow motocross bikes to ride up.

I continued down to the Third Divide trail, which was fast, rutted, dusty and basically nothing more than a glorified moto trail. The fact that many mountain bikers raced down this trail a week ago had perhaps something to do with the state of this trail. Riding this trail required staying loose, looking way ahead and hoping that the bike's suspension would take care of the crap beneath the tires. I reached the bottom of this trail without an incident, just with blisters forming on my palms. After a fire road section, I entered the last leg of the downhill: The First Divide trail. This trail was relatively smooth, but perched high on cliffs above the Lavezolla and Pauley creeks. Exposure was quite extreme at few places and it was hard to know what was behind a bend. I guess if you overshot one of the corners, you would at least die happy. 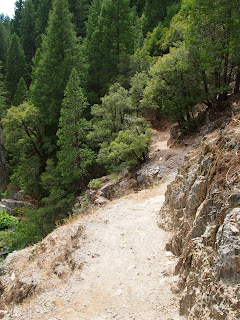 I made it to Yuba Expeditions bike shop after four hours, with an hour to spare and spent it by filling my belly with Gatorade and ice cream. 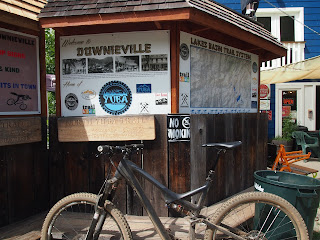 I guess this ride was probably my most "reckless" downhill run ever and I was frankly glad to be done. I climbed 1230 ft and descended 5,125 ft!

Another gorgeous morning on Sunday saw us packing camp for a transition down the Golden Lakes highway to Mills Peak trailhead. This time, I was ready for some climbing and Marketa for some technical trail running. 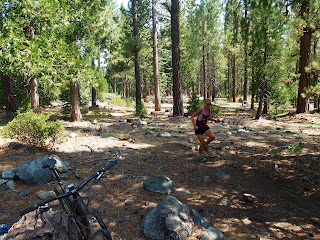 Mills Peak is a trail built recently and sponsored by Ibis. I estimated its length at around 5.5 miles each way (out and back). The trail reaches a fire lookout tower at 7,342 ft. It was obvious that this trail was built well using modern methods. It is narrow, bermed, there is barely a straight section of it as it sneaks uphill. It was still very rocky and technical. Ascending over lose and sharp rocks at this altitude and hot weather was difficult even on 29" wheels and required lots of strength. It helped me a lot that we regrouped every half mile or so, just to make sure we stayed together. At mile 4, we could see the lookout tower at a distance and still very high above us. Marketa decided to turn around and start a slow descend with guaranteed treacherous footing. I continued up the trail, sweating buckets and almost constantly sucking on my Camelbak hose. 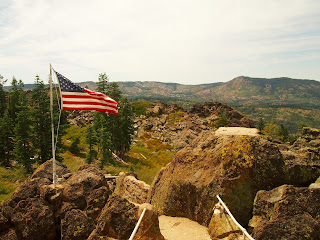 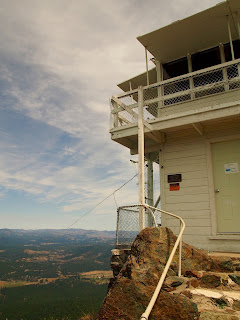 It took me another hour of climbing through big trees and even bigger rocks to reach the tower where my odometer showed 8.2 miles. The views from the Top of the World were well worth the effort. 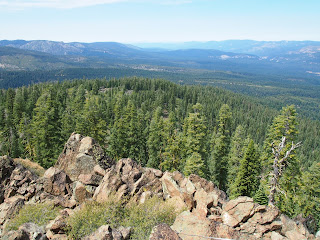 And now I was at the point where the real fun started! The top section of the mountain was a pure singletrack heaven. The trail was very technical, requiring a constant attention and maneuvering but even at speed, it allowed enough time to react to obstacles. I enjoyed my descent tremendously, all the way to the flatter but rockier bottom part, which was as demanding as the top portion, if not more. After another eight miles of nirvana, my hands burned and my lower back screamed but the cramp I got was in my facial muscles from grinning. Cooling ourselves at Golden Lake, refueling with the best electrolyte there is (beer, as everyone knows), I kept thinking how lucky I was to experience such an expertly built trail (thanks Sierra Buttes Trail Stewardship and Ibis!!!), on a super capable bike, at my age. I really hope that there will be more days like this one to come.
Posted by Unknown at 11:15 PM 3 comments: