Well, not much. Just a normal July in the Bay Area. The fact that Fox media sponsored fascist is a candidate for the post of the American president does not really belong here. Something has also happened (not for the first time) on my blog page view counter: 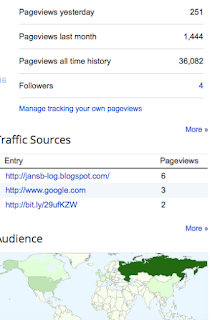 Since the end of June, we have what I believe the first ghost bike in Pleasanton. A 72-year old cyclist was struck down at an intersection very close to our house. I cross this intersection on my every ride to work. 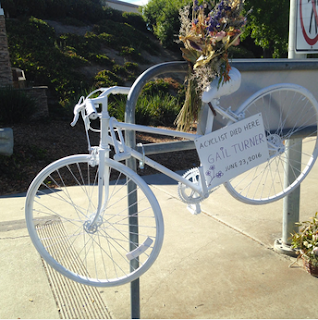 I hope this will finally get the city to fix this dangerous place for all cyclists.

What else: our long awaited and planned hike up Mt. Whitney on July 2 did not happen. We were ready in Lone Pine at 3:30AM just to learn that a small brush fire closed Whitney Portal area. That's OK, I'd rather hike another mountain than to find my car charred at the parking lot after coming back from the hike. There goes the lottery won once in 10 years. We attempted a hike to Mt. Langley, but did not have proper maps - which we did not think we needed for Whitney - and followed a trail that vanished at an interesting stone ashram. 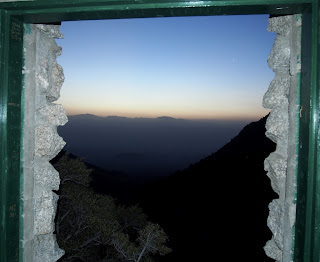 Two days of hiking and riding at Mammoth Lakes more than made it up for the disappointing event. 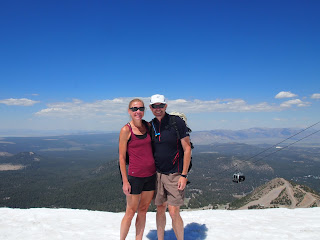 Otherwise, as I said, it is just another summer in the Bay Area. With that comes the weather, cold and foggy at places where the marine layer reaches, hot and dry everywhere else. A week ago, we rode from Castro Valley towards Chabot Space center and the fog did not break. We were miserably cold all the way up and it took a long time to bring our bikram yoga conditioned thermoregulation above shaking levels. 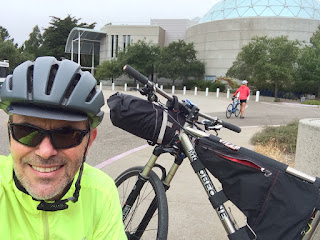 Another old piece of news is that after ten years living in the Bay Area, there are still so many new back roads and trails I have never cycled on. A perfect example was Pinehurst Rd., east of Redwood Regional Park. A redwood canyon with a post office and small school.

Today (sunny, 90F on the Peninsula, cool 100F in Pleasanton), I rode couple of new trails at Russian Ridge. Charquin trail is a perfect connector from the less used parking lot on Alpine Rd, and the extension of Ancient Oaks trail downhill to the parking lot was lots of fun, despite being made smooth enough to allow teenagers to hike it while looking at their phone screens. 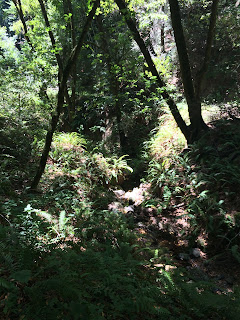 I have also "discovered" Old Page Mill trail, which is marked on Google and topo maps as a through trail to Portola Redwoods SP, but ends abruptly at a deep ravine full of poison oak (as the MROSD maps indicate, eh the trail end, not the poison oak). It is a really nice unused trail that reminded me at places of Butano Ridge.

And yes, it is the fire season in California. Big Sur is burning and the smoke and heat induced cumulus clouds could be seen across the Monterey Bay from trails at Russian Ridge.

On the consumerist side of things, two small upgrades to my riding gear once again proved that 1. it is good to buy yourself something nice once a while, and 2. quality gear is awesome. I upgraded my MTB shoes for a pair of hideously bright red Specialized MTB comps: 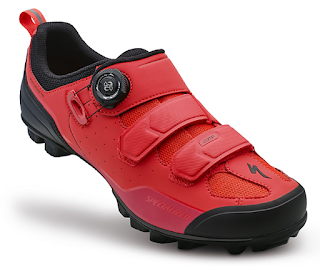 This shoe has recently been reviewed by the Bike magazine and I agree with the reviewer: the non slippery yet firm sole is fantastic, and I also love the Boa dial although I still turn it the wrong way every time I want to adjust it.

The second upgrade was a new pair of sunglasses. The nose pads of my Ryders glasses I got at the 2011 BCBR finally dissolved into a slimy goo, after six years of heavy use. You see, I never lose my sun glasses. Perhaps it is because I wear prescription glasses and if I lost those, I would not be able to find them without them. The new pair has photochromic orange lenses and anti-fog treatment, all for $100, free shipping and all!

And finally, I had extensive allergy skin testing done the other week. Guess what! ALL of the tests came out pretty much negative. Six years of desensitization treatments has finally paid off, as I was sure it would. I still get an occasional shortness of breath, but I don't use my emergency inhaler almost at all (few times a year, typically with respiratory infections), my Eustachian tubes still sometimes itch and stick after runs or bike rides, but that's about it. Considering that we live at a location where everyone becomes allergic to pollen after few years, it is remarkable. There is scientific evidence at the molecular level that the "bad immune cells" change upon allergy shots and I hope that immune repertoire sequencing will one day become the standard of care, instead of the archaic and subjective skin prick method.

Next two weekends, I am off for some Sierra riding with friends, so till next time, you three or four people who still bother to read this. Thanks!
Posted by Unknown at 9:44 PM 6 comments: