In my last post I described a tire swap among two of our bikes. My universal bike, the Motobecane 29er Ti hardtail, now looks almost aggressive with those knobby Specialized Captain Control 2.0 tires. In between rainy Saturday and rain in the forecast for Monday, Sunday was the day to test the new rubber, with pressure set at ~ 38 psi.

My ride started on paved streets through Belmont and continued on the pawed Sawyer Camp trail all the way north to San Bruno. A short ride on Skyline and Sneath Lane took me to the entrance to Sneath trail and the climb to the San Francisco discovery site. Up to here, all pavement. 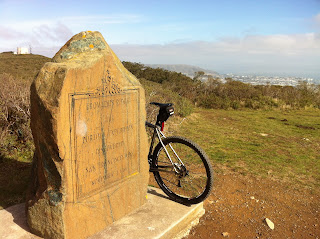 I did not feel any increase in rolling resistance, but then the trail was so busy with runners and people walking that I had to ride slowly most of the way. From the top of Sweney Ridge, Baquiano dirt trail starts as a jeep road but quickly turns into singletrack switchbacks descending to Fassler Avenue in Pacifica. Here, the tires felt very grippy and cushy, but then the surface was wet and tacky from the rain on previous day. 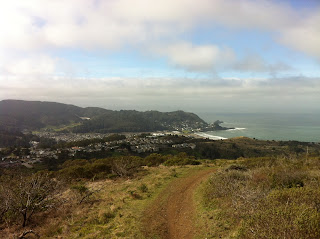 In Pacifica, the surf was up and the ocean water was busy with black neoprene. The coastal bike trail led me to the famous Taco Bell place at the beach, from where I took town streets to Old San Pedro Mountain road. 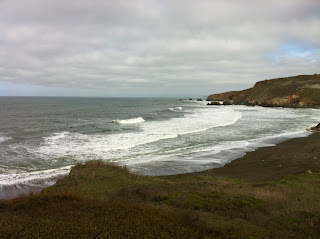 The climb up felt easy, muddy spots changed to crumbled pavement and to sandy spots. At the intersection with Montara Mt. trail, I pointed my bike away from the mountain summit (obscured by clouds) 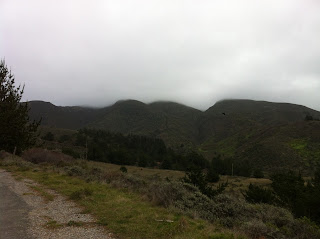 and descended down towards the Montara Beach. 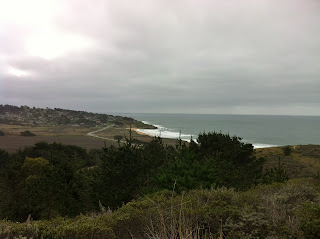 On the way down, the tires again felt super supple, hooking up really well in lose, sandy corners which I took at perhaps more speed than I should. The trail surface is rough, old broken pavement in many places, but I did not experience any of that locked front suspension feeling I had on my Bolinas ridge ride.
Once on Highway 1, I had to put up with car traffic and exhaust fumes for several miles, where, just past the Half Moon Bay airport, I entered a bike path along the coast and the state beach. There is a nice paved bike path, but in parallel, there were two dirt tracks: one very muddy and eroded for equestrians, and another, smooth and undulating one for mountain bikes! I followed the bike path, missing the whole busy town of Half Moon Bay and looking at waves crashing on the shore. The trail ended almost exactly at Higgins Purisima road, which I took back east, towards the mountains. Higgins Purisima is a steep climb. I was getting tired and did not really think about rolling resistance or gears I was using.
All those thoughts quickly reentered my mind as I finally passed through the Purisima Creek Redwoods preserve gate and entered the Whittemore Gulch singletrack. 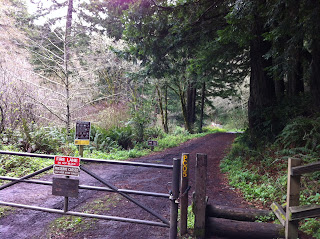 There was mud. Lots of it. First, it was the nice kind of mud, loam mixed with redwood needles, beautiful. The first very steep climb starts right at the bottom of the valley. I did OK there, spinning the granny, perched at the tip of my saddle and the tires not slipping once. But then, the yellow clay mud section of the trail came and my wheels suddenly looked twice as big and felt ten times heavier. Rear wheel started to spin through as I applied power to the pedals, but to my surprise, the tires shed mud and cleaned themselves pretty quickly. It was  hard climbing, this trail is tough to climb when dry on the 29er with its tall gearing (28T cassette) and I ended up walking one super steep section at the top. On the switchbacks, I had no problem maintaining traction. Overall, I have to say, if I rode there with the Kenda Small Block eight tires, I would have ended up walking most of it, I'm sure.

The rest of my 60+ mile ride was roads, the tires were mud free after a few hundred yards on pavement, but most of that mud ended up on my face and butt. At the end of my ride, there was a bit more of trail riding from Canada Rd home, as shown on the Garmin track.

The saying "if it ain't broke, don't fix it" holds true in many situations. However, I am a scientist and I like to tinker with stuff to see if my ideas would improve things, or just because I am curious to see what happens. In science experiments, the success rate is really low, perhaps 10%. In technology and engineering, such as bicycles, I tend to believe success rate must be higher, because smart people have figured it out already. But if they really did, wouldn't the saying above always apply?
So the changes I did to three of our bikes described below may seem like unnecessary, but they have a certain logic which I will try to explain.

Part I: Mojo 2x9
Of course, we all know that the new Shimano and SRAM 2x10 drivetrains are all the rage these days. Interestingly, the mainstream technology spurs ideas like a 1x9 or 1x10, all based on the question: "how many gears do we really need on mountain bikes?". I know, some people would say "just one", I have been through that phase before....
I asked myself this question: how many gears of my standard 3x9 setup (11-32 cassette and 22/32/44 triple) do I really use? Riding around the Bay Area on some really steep hills both up and down, one would think I used the full range. In reality, it is more like this: on steep climbs, I tend to ride 22/32 or 22/30, then shift to 32/30 - 28 etc. as the terrain becomes more rolling. In the middle chain ring, I tend to use the low gear half of the cassette. When spinning out on downhills, I shift the 44 chainring way before reaching the tall gears just because it is way fewer shifts and the chain bounces less at 44.
So using the Bike Gears iPhone app, I figured that changing to a 2x9 setup, using an 11-34 cassette and 24+38 chainrings would yield gear range quite close to what I have now. The lowest gear would be tiny harder (1.373m of development vs 1.337m) and I would lose more at the high end (6.719m vs 7.780m), but then how often does one ride at 44/11?
Here is the solution:
Rear: 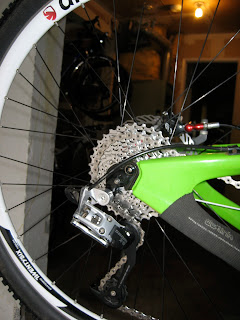 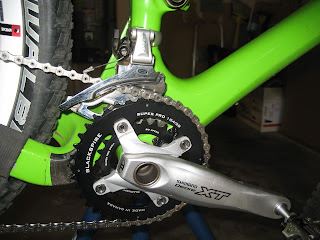 OK, so everything is in place, it shifts beautifully on the work stand and in the parking lot test. The next test, of course, will be climbing and descending on trails. Stay tuned for a ride report.

So this takes me to the Part II of the project: Marketa's Specialized Myka Expert bike is really heavy for a women's bike. What makes the Specialized product managers think women need bikes heavier than guys'? So one way to make it lighter (after researching some of its components weights online) would be to swap the Alivio crankset / front derailleur and the cassette for XT-grade components. See? If I really like my 2x9 setup on the Mojo, the next logical upgrade would be going full 2x10 SRAM X0, thus all the 9-speed components from the Mojo would end up on the Myka.
But the best place to start saving weight is wheels and tires. That's where the 3rd bike (my Motobecane Phantom Pro 29er) comes into play. This bike comes equipped with pretty lightweight Vuelta XRP SL wheelset and I have been using Kenda SB8 tires pumped up to 50psi for commuting to work on pavement. These tires perform really well on dry dirt in loose and dusty conditions and have a low rolling resistance. Front wheel with tire, skewer and a large 180mm rotor weighs 1800g: 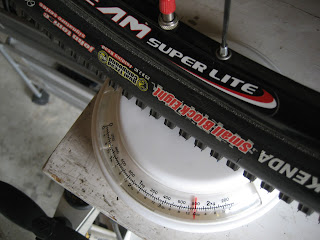 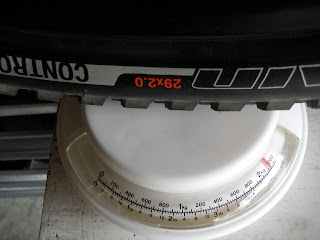 OK, so I was not ready to swap the whole wheels just yet, but thought that swapping the tires would give the Myka an advantage of ~ 200 grams less and lots less rolling resistance. My 29er would be OK with heavier tires - I will just pedal harder on my commutes and have more tire tread for wet trails in the winter. 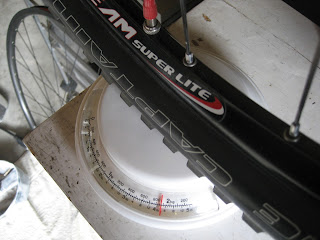 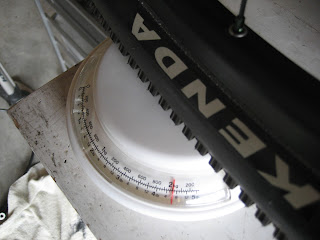 As you see above, the Vuelta+Captain combo comes out at ~ 1875g and the Specialized+Kenda combo at 2000g. Given the +/- 100g accuracy of the scale, looks like about 200 grams (both front and rear) moved from the Myka to the Motobecane, as predicted based on published tire weights.
But the real test would be in real world conditions. First chance to test the 29er "new" tires presented itself the very next day.

Posted by Unknown at 9:35 PM No comments: