Just before the Holidays, series of wet and cold storms brought 4 feet of snow in the Sierras over four days. Even our East Bay Mt. Diablo has received some snow and ice coating at the summit. On Christmas Day, we hiked from Juniper Point on the Diablo Summit Road which was closed to cars, to the tower. We chose the easy road instead of steep trails since Marketa was nursing a badly swollen knee, a running injury. 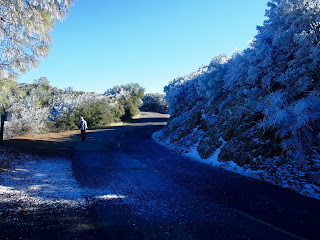 Winter is the best time to explore Mt. Diablo, since the poison oak is still dormant and temperatures are low. This Christmas, it was “very” cold, by California standards, around freezing in the morning and low 40-ies for highs. On St. Stephen’s Day, I took the fat Mukluk for an exploratory ride on the Diablo southwestern slopes. I followed the MountainBikeDude’s 12 mile route starting at Macedo Ranch. Couple of dry and windy days turned the first 0.3 miles of cow-stomped mud into a petrified rodeo track, but as soon as I entered the system of fire roads, the surface varied from rocky to loose. My choice of bike for this ride was the result of both anticipation of some very steep and loose trails (Burma Road) and preparation for some snow biking at Tahoe. After crossing the North Gate Rd., Burma Road did not disappoint: it is so steep to make the Sierra Azul Dog Meat trail look flat. I attacked the hill with resolve but no fat tire traction could help here, and the only way up was to fight for foot holds, push the bike up two feet, squeeze the brakes, pull myself up on the handlebars, repeat. 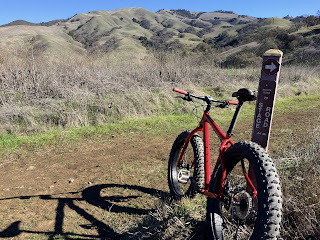 Besides the ridiculously steep trails, this ride had some really nice views of the mountain, and it used both single track trails on this side of the hill (Mother’s trail and Diablo Ranch trail), the other being the 3 mile Oyster Point trail between the Blackhawk Ridge and Morgan territory. Especially the Diablo Ranch trail was sweet, despite being just 1.1 mile long. Another curious sight along this ride was a water tank at the Mosses Rock Spring, filled with clean water to the brim and teaming with koji fish. 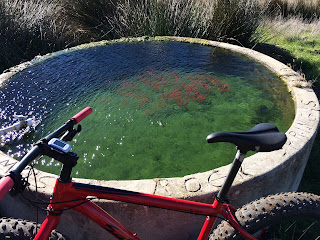 On Monday, we set out for North Lake Tahoe, where spending five days around New Year has become a tradition for us and our friends’ family. We drove there equipped with fat skis and my fat bike, in anticipation of a week of sunny weather ahead, good conditions on the slopes and the potentially some rideable trails. 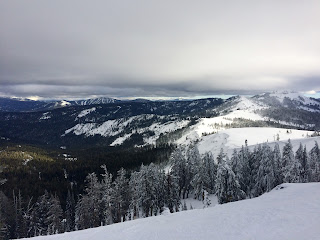 We skied at Northstar, Sugar Bowl and Squaw and despite the shockingly high lift ticket prices and unavoidable traffic jams at resort access roads, we enjoyed great skiing and surprisingly little lift lines. The weather stayed cold the whole week, single digits overnight and high twenties during days. On Thursday, I parted from our group of skiers and went out for a fat bike ride, along a gps track that I downloaded from Gaia (I found only two recent fat bike rides at North Tahoe, both by the same rider, dating to November, when there was just a foot or so of first snow. Now, with 120 more inches, I was not sure which trails would be tracked and which would be completely unrecognizable under several feet of deep fluffy snow. This was also the coldest day of the week, with -11C in the morning. 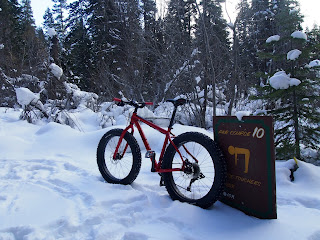 The first part of my ride followed a single track through a Par course, then started to go steeply up along a nicely packed fire road, eventually turning into a narrower snowmobile track. All rideable until the track ended just north of Tahoe Rim trail, circling around a big tent, apparently a place where snowmobile tours from Brockway Summit stop for lunch. Turning back, I did not recall seeing TRT crossing the track, so I used the Gaia app to locate the intersection. I found a ribbon marking the TRT exactly where shown on my map, but could not make out the trail at all. To the right and left there was nothing but glimmering mounds of snow. 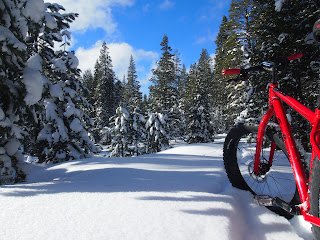 I figured it would be less than 500 meters to a place where TRT came close paralleling a fire road, which I hoped could be tracked, but of course, I did not know. Pushing the fat bike in knee and sometimes thigh deep powder was fun, but the fact that I was not on any trail made me a little nervous. I knew that I could back track any time, since on this bluebird day there was no danger of not finding a way back. Sooner than I thought I saw a perfectly groomed corduroy track, with no signs of snowmobile use. This trail lead to Road 109 on which I continued towards Sawmill Lake, but grooming ended right at the Northstar resort boundary. Here, I continued climbing on a wide, snowmobile packed Carnelian Bay Avenue west towards Watson lake. This stretch of trail had some snowmobile traffic, but these were organized tours and the drivers were very polite and slowed down to a crawl when passing me. The climb was steep enough to keep me sweating while inhaling the frosty air, until I reached a sunny lunch stop where, I stripped down all my wet layers and put my dry puffy down jacket on. 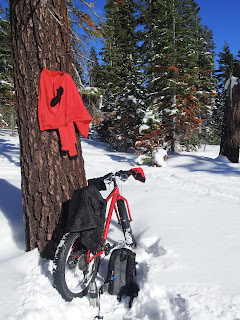 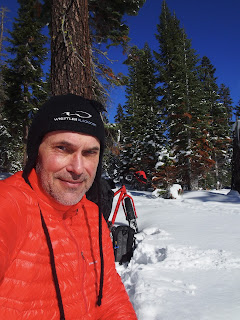 Drinking hot sweet tea from my thermos, I thought about how complicated snow biking is, even in this “tourist” version. Between finding the right tire pressure and keeping the extremities warm without getting soaked is not an easy task. I am not very experienced at this, I hate getting really cold and I also think that I need to keep my head and ears warm to prevent sinus and ear issues. As the day progressed, the winter sun rays did not provide much warmth and by the time I reached Watson Lake via some fairy tale like forest, I felt the temperature starting to plummet. 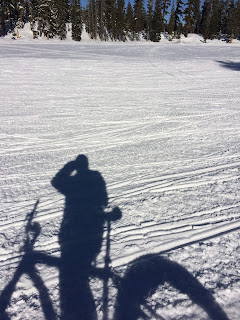 The lake was all covered in snow and there was not a soul around, except one abandoned snow machine. The descent back was a classic fat bike “downhill”: fat tires causing just enough resistance not having to use the brakes almost at all while keeping speed in the fun range while drifting through turns. But without effort-generated body heat, I was cold as an icicle when I got back to the unnamed corduroy track. It took the rest of my hot tea to make me shiver less and to soften a Clif bar to make it chewable. Here, I decided to continue along the luxuriously groomed trail, but the perfect surface did not last too long. Soon, it turned into a single snowmobile track that was not firm enough to fully ride and after the driver took a short left and must have fallen into a deep ravine, which I did not dare to hike down, the surface was virgin snow. The forest road was clearly visible though as a clearing through the woods and it pointed in the general direction of the Lake, so I decided to push through and see if it would get me closer to home. Snow was especially deep here, I sank often was deep and had to use the bike as a flotation device. 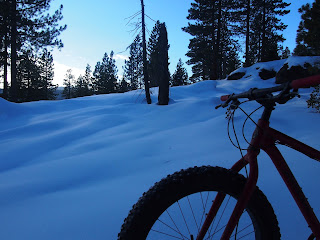 Just as the last sun rays shone over the hill and I started to lose hope, I came across a single skin track on the left. I followed this only sign of any human activity in no less deep snow steeply downhill, but now filled with hope that the skier must have started somewhere near civilization. It is funny how being in the “backcountry” made me feel vulnerable, although in fact I was probably less than three miles from the Lake shore at this point. Instead of finding  frozen skier’s body, the track spitted me out on a groomed trail close to the exercise loop where I started more than five hours earlier.

On the last day of our vacation, we skied at Alpine Meadows, where off-piste terrain is abundant and steep. While it looked like every square inch of the slopes was skied out, it was still possible to find good stashes of powder among trees. The highlight of the day was a hike up to “Keyhole”, a narrow passage through rocks to a steep bowl filled with knee deep fluff. Despite my legs being quite fried from the bike ride, I skied till the lifts close at 4PM. In the evening, we tried to avoid the vacationers’ traffic by having a nice Thai dinner in Truckee, but still ended up on the road for 4.5 hours. 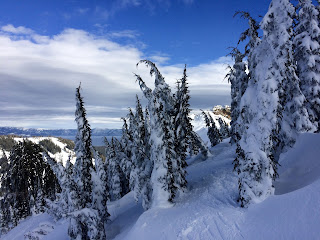 One may argue that this California version of snow sports is hardly worth it: four days of skiing (which equals to $1100 in lift tickets for two people) and one 16 mile fat bike ride per year, with all the crowds and traffic? Yet to me, the weather, the scenery and the vast skiable areas together with the fact that the grass is already green where we live and no need to shovel snow from my driveway, more than makes up for the inconveniences. I think we have a good snowy winter ahead and one has to pay to play.