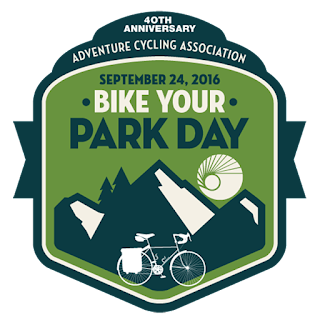 Or two, actually. Days, not parks. I'm sure lots of cyclists were made aware of the special day - Saturday September 24 - by emails from Adventure Cycling Association. In celebration of public lands access, I have registered an overnight ride from Pleasanton to Saratoga-Sanborn County park. The ride was supposed to also be a test of Marketa's e-bike range, with each leg being close to 60 miles. She wisely decided to pass on a strenuous activity, four days before a complicated surgery. So I tried to campaign with all my friends who I knew owned a road or touring bike. Turned out, nobody thought that biking for most of a day, camping and riding again was their idea of fun weekend. So I campaigned some more, suggesting that perhaps they could ride to Sanborn and get picked up by families. This version was attractive to me, mainly because there was a chance of my friends' spouses bringing beer and real food. That too did not happen. 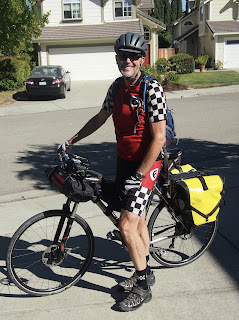 I am not new to multi day bicycle touring, but I have never carried all camping gear on my bike.  This time, I packed a bare minimum for two days with no danger of wet weather or low temperatures. This is California touring! A tent setup in the handlebar roll, tools, stove, pot and food in the frame bag, sleeping bag and a mat in one pannier and change of clothes in the other. I used my 3L Camelbak for water, camera and valet, and since I was planning to ride through some urban areas with less than stellar reputation, I also attached a ridiculously heavy cast iron Abus lock to the downtube. I did not dare to weigh the bike.
My route went from Pleasanton to Sunol and up Calaveras Road, a popular route with local cyclists, so the climb went well while chatting with fellow riders. Actually, I am always surprised how well a loaded bike rides - the forward momentum on flats or downhills is amazing and at this point, climbing felt easy, too. There was a nice breeze on the top of the climb and birds of prey were soaring on the ridges. The descent to Milpitas was fast and I really appreciated the power of XT brakes. 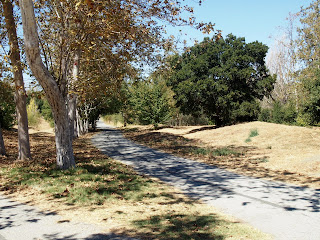 After crossing some suburban areas of San Jose, I had no trouble locating the Guadelupe River bike path. My plan was to cross downtown San Jose on this multi-use trail. Whoever designed this trail probably never rode a bike. The signage is poor (just follow the fishes, but which ones?), and the trail has too many ramps and spurs. The worst is that the trail abruptly ends in these dead end cul-de-sacs without a warning. Every single one of these places were a homeless encampment. This was quite shocking for me to see: years ago, I traversed San Jose on one of my rides during the crisis years and I did not see nearly as many homeless people as now, in times of great economic boom of the Silicon Valley. Something is probably very wrong with this place. 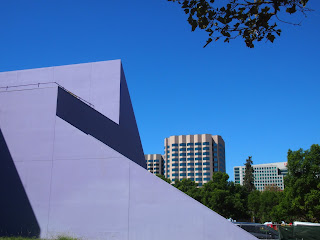 Bike path riding was slow and navigation turned out to be more difficult than on open roads, so I was very happy to eventually reach the quite scenic Los Gatos Creek trail, which goes straight to the town of cats along a nice creek with small dams and lakes. The trail turns to dirt just as you pass underneath the busy streets of Los Gatos, so I did not stop here and continued up to the Lexington Lake dam. 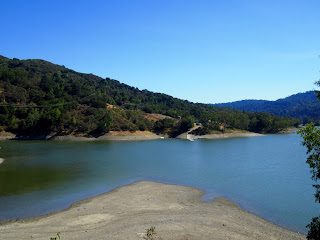 The Lex water level is low but more importantly, there is no water source here and I was becoming tired, ran low on liquids and I knew there was a steep climb ahead. After riding around the reservoir and up to cross Highway 17, I was facing the wall of Black Road. This is where the weight of my rig finally sucked the last power out of my legs. With the Camelbak dry, I slogged up driven only by vision of a water faucet at the school about half way up. This had happened to me before - bonking on Black Road and filling my bottles at that school. This time, I was really afraid that California water saving measures would turn the faucets dry. When I reached the school building, water was on and I was saved. I drank about three bottles until water was squirting out of my ears and took more water with me. From here, it took some more granny gear grinding to the PG&E fire road that lead to Sanborn. 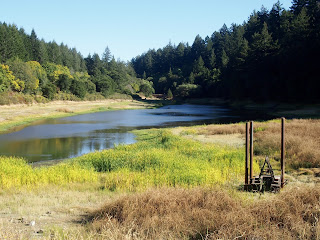 At this point, I was too tired to enjoy the views of Ranch Lake and carefully descended a steep dirt road towards the park. My 35mm tires with 80 psi in them did a great job on dirt, but if the ride involved more fire roads, I would have chosen something wider or more knobby. However, I have put lots of miles to these Vittoria Randonneur Hyper tires since 2012 without a single puncture, that's why I left them on the bike. 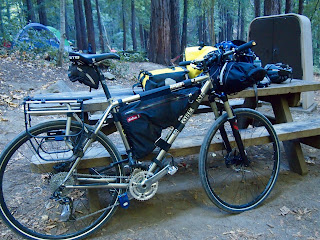 Accessing this public park was as easy as waving at the ranger booth and riding up to my reserved camp site under the canopy of tall redwoods. I arrived here around 4:30PM, after about 62 miles and over 5000 ft of climbing. I set up my tent, went for a hot shower, cooked my freeze dried Thai chicken with noodles. I haven't had any of this camping food in many years and I forgot how awful it tastes. Along my ride here, I passed probably few hundreds of expensive and Zagat rated restaurants, but no, this was a self supported trip, no sushi! 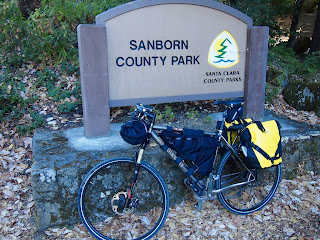 Sunday morning, I got up, cooked my second bag of freeze dried food (Oatmeal with apples and quinoa, also half star for taste), packed everything and hit the road. My second day route was planned to be lot easier. After crossing a few hills between Highway 9 and Steven's Creek park, I was in the Valley and thus on flat grounds. I went down my memory lane on the Steven's Creek bike path, busy with lots of people walking at some event.

At the Shoreline park in Mountain View, the familiar views of the Googleplex on one side and the NASA grounds on the other opened up.
I stayed on bike paths through the Shoreline area and rode through the Bay coastal marches all the way to the western end of Dumbarton Bridge, right next to Facebook headquarters. 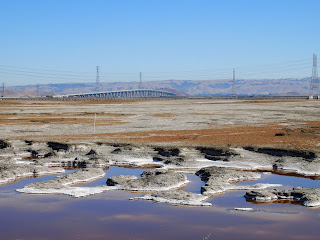 I took this picture right before getting on the bridge. Dumbarton Bridge has a bike lane all the way to Fremont. 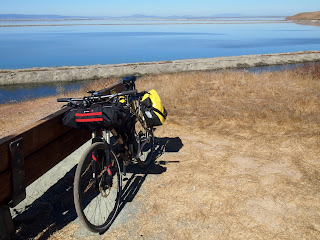 On the East Bay side, I went to explore trails in the Coyote Hills preserve. I have never been here before, I guess since my previous bike trips across the bridge were on skinny tires and here I rode on dirt roads. The fire road hugged the shoreline and offered interesting views of the Bay, the Peninsula, San Francisco and Oakland. I climbed a steep grassy knoll where I had lunch consisting of two Clif bars - a tasty change after the rehydrated food. 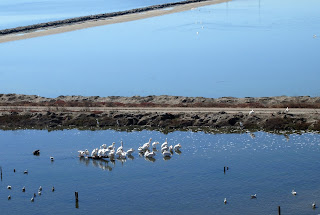 It was fun to sit there on the bench, watching egrets, herons and pelicans and basking in the warm sun. But I had some more ground to cover. The next section took me on Alameda Creek bike path. This part of the ride would be almost boring, if it was not for two police SUVs with lights flashing right in the middle of a long bike path section. Turns out, the cops were talking to a group of homeless people, who managed to cover a large area around the trail with trash, broken furniture, tarps, tents, parts of bicycles, whole bicycles and who knows what else. The cops seemed to be really nice to the homeless folks, but I noticed fear and shame in the eyes of the campers. Again thinking that these people should probably be in counseling or mental health institutions and not living like this.
The last stretch of my return trip went through the scenic Niles Canyon, but traffic was busy, much more than I ever remember it being here on weekends. Then came Sunol and Pleasanton, I rode on Main Street under the Pleasanton sign before leisurely pedaling the last mile home. 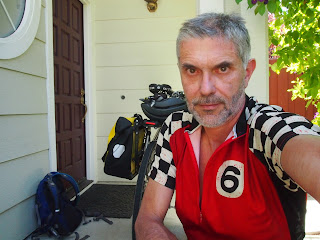 The first Pilsner Urquell beer from the fridge evaporated with a hissing sound when it hit my insides, only the second one started to replenish the essential electrolytes and carbs. So were my friends right not to do these rides? On one hand, I really enjoyed seeing all the diverse environments of the Bay Area from the seat of a bicycle, on the other hand, I think that long(-ish) distance bike touring should be compensated by sleeping in hotels and using your credit card to buy good quality food. Camping is fun, cycling is super fun, but both together may be just too much fun for me. A European version of bike touring is what I look forward one day. 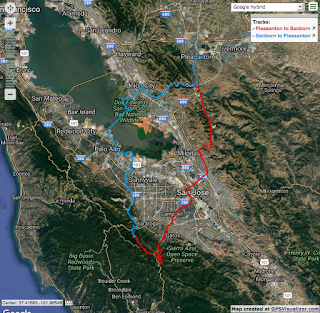