There were several reasons for me to have this ride listed as "to do" this year. First, Morgan Territory Rd is listed as a must-do ride in most of the Bay Area cycling publications, secondly, when I saw cyclists struggling up Mt Diablo South Gate Rd during our hiking trip in April, I thought this was the last mountain around the Bay I haven't ridden up to yet (well, with the exception of Mt Umunhum which I guess is for now closed to mountain bikes), and thirdly I was hoping it would be warmer in East Bay on this unseasonably cold Memorial Day Saturday.
I have decided to ride from Danville, at the foot of Mt Diablo and circumnavigate the mountain counterclockwise, with the ascent done on North Gate Rd and descent on South Gate Rd.

As so many bike rides around here and in California in general, this one took me through several quite contrasting landscapes and environments: some sections (Camino Tassajara close to Dublin, Clayton and Ygnacio Valley roads) were examples of the "American Dream Turned into the Worst Nightmare" suburban sprawls with cycling unfriendly roads and angry drivers of Escalades and Tahoes. Morgan Territory was all horse ranches and cowboys wearing hats, who were very respectful of bikers, except one meth head in a beater car who almost drove me into the ditch and sprayed my left leg with oil and dirty water coming off his exhaust pipe. The climb up Mt Diablo was beautiful, with lots of wildflowers and few cars. The chilly weather helped on the way up, although I can imagine this place turning into a furnace later in summer. The descent was very chilly, given the 55F temperature, 30 mph winds and waves of rain showers coming from the west.
Overall, this mountain has been climbed for the record, but I have to say East Bay rides will remain low on my list of cycling priorities as long as I live close to peninsula and Santa Cruz mountains. 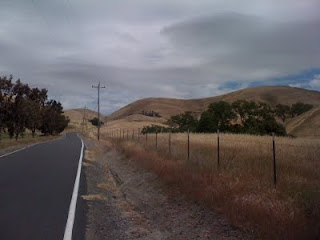 Start of climbing up Morgan Territory Road with lenticularis clouds formed by the strong flow over Mt Diablo.


Garmin track here:
Posted by Unknown at 9:21 AM