Low Key Hill Climb No.1 and an Introduction to Coe

The first in the nine-week long series of Low Key Hill Climbs took place Saturday at Montebello Rd. This used to be my after work road ride to a nice vista point with great views of the Silicon Valley. I tested my climbing legs last weekend on Kings Mountain Rd, OLH and Crestview in one ride and felt good. But this ride did not go well for me and I struggled for the first half of the climb and was able to catch my breath on the second half but just barely. I "improved" my 2009 time by 3 sec to a miserable 39:56. But the scenery and the view from the top was as nice as ever. 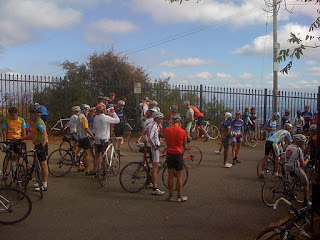 On Sunday, I finally got myself to make the long(ish) drive to the Henry Coe State Park. I have been thinking about riding at this park the whole summer long, but a lack of companion for this remote place, weather being too warm etc. were among the reasons why this ride always got postponed. With weather forecast threatening rain this week and also reading on mtbr.com about several people's crazy idea of riding 140 miles and 29K vertical at Coe pushed me to venture there. I decided to ride just a basic, introductory loop from the park headquarters, starting on a nicely flowing singletrack (Frog flat) to a fireroad climb to Frog Lake, then taking Middle Ridge downhill to China Hole. The downhill trail could be fun if it was not for my first cautious time there, I was on my brakes most of the time in order to avoid surprises at switchbacks. The trail surface was pretty loose and I fought for traction at places, probably due to too much tire pressure as well as my rear Nobby Nic due for replacement. It was obvious that this trail was not a purpose-built MTB trail, rather a typical trail used by horses with a V-shaped trough, as well as of-camber turns.
The dry river at the bottom of the canyon was interesting, but the hike a bike section on Creekside Trail to China Hole less so. 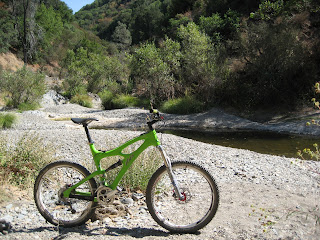 At China Hole, I met a chatty backpacker, who was trekking the park on a three day trip and was probably sick of being alone at this remote place. He also told me about meeting the group of six ultra-endurance riders attempting the Coe Everest Challenge. 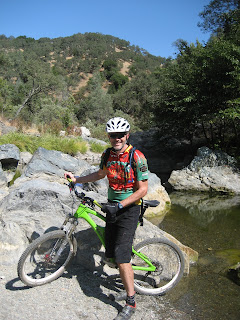 The climb back to my car on China Hole Trail was nice, very sunny but with a nice breeze coming from the west, and very nice views of the ridges around.
So as a first glimpse of what Coe has to offer, this 13.7mi ride was perfect. I will be coming for more of Coe, since it will stay open for 2013 and hopefully beyond.