I awoke with leg cramps, exhaustion and my mind racing with how to justify not riding what was described as the hardest day of the tour: a long climb, a descent back into the valley floor, all finished off with another 3500 foot climb to the snow-covered La Sal Mountains. My training for the Kokopelli Trail had consisted of two dozen 1-2 hour rides on flat roads of the eastern piedmont of North Carolina, plus four one-hour mountain bike rides. In short, I was totally unprepared for the Kokopelli, let alone Day 3 on the heels of Days 1 and 2. My last ibuprofen pill, a cup of coffee and Jan egging me on by saying pain is all in the mind convinced me to get on the saddle and pedal: slowly - painfully slowly - embarrassingly slowly.  Within an hour I was off the bike and pushing up a section of jeep road, the only consolation being that I really wasn’t falling that far behind those using bikes in their official capacity.
A cold drizzle and snow flurries on the first long uphill section, and corresponding (irrational?) fear of hypothermia only added to the sense of ‘what the heck am I doing’. But I had a smile plastered on my face during the lone, long downhill double-track section which seemingly went for miles; the only near disaster being an endo which almost dropped me face-first into a prickly pear cactus. After reaching the valley floor and riding a few miles of flat jeep roads (which still felt like going uphill thanks to an inch of powdered sandstone) we began what was a near continuous three-hour climb up and around mesas and into the mountains. The views were simply spectacular, although my legs did not much care about the views. The final few miles were spent climbing a steep muddy road in sleet and snow, looking in vain for bits of packed tire tracks to offer reprieve from the Velcro-like mud.  Slogging into camp I quickly set up my tent in light snow and hail, egged on my riding partners to cook dinner for me and went to bed at 7:30PM, happy that I was able to finish but also grateful it was over. 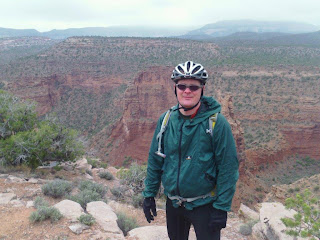