Someone told me that summers at Pacific Northwest are the best kept secret. I have to agree: sunny and warm days, even too hot sometimes, nights cooler, no bugs, nature green, lakes warm for swimming and high country trails accessible for hard climbs rewarded with fantastic views.
Then it all disappears all of a sudden and the rains move in. Even an NPR guy said "It's time to put away your sunglasses for eight months". So I did. And I took the patio furniture off the deck and put it in the garage. Then followed the grill. And then I harvested tomatoes from the four plants that grew so wildly over the summer but these poor little things never got enough sun to ripen. 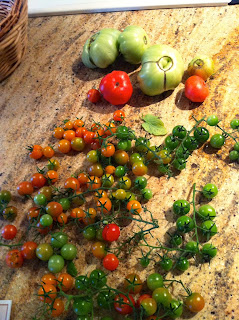 A three-day heavy rain storm that dumped 10 inches of water in the Cascades and changed our residential street into a raging stream on Saturday afternoon upon us, I sat at the computer whole day yesterday and most of today, working on my two other (unpaid) jobs, drinking one cup of coffee after another and spiraling into a gloomy mood. I even politely declined to join friends for a hike around the Discovery Park, but the truth is, my sinuses and allergies were going crazy today. Later in the afternoon, I decided to use the worst method to cheer myself up - shopping therapy. While researching some trail running shoes online, I found out that there was a running store couple of blocks away, which carried all kinds of interesting brands: Altra, Hoka One One etc. I read some reviews about the Altra Lone Peak zero drop shoe and how much cushioning it had. I really needed something better with more grip for the fall wet trails than my old Salomon Missions. So I went to the Seven Hills Running store, found it empty but a young store employee, an avid trail runner, was more than willing to talk gear and trails. To my disappointment, the Lone Peak are really minimalist shoes and I am too old to try if my feet remember how our ancestors used to run. My wife runs only in Hokas, she has probably four or five pairs of all models to rotate, but I have never really considered them for myself. One, my weekly mileage is pathetic, and two, I always thought these shoes have an advantage after 50km or more. But I tried the Stinson Trail model on, it fit like a glove, but there was a strange inward rolling feel, almost like there was no support for the big toe. Then I tried the Mafate 3 and they felt much more stable. I really wanted to wait for the Rapa Nui model which will arrive here in November (reviewed here), but in a spur of the moment bought the Mafates.

By the time I got home the rain subsided a bit, so I put them on and ran the ~ 9 mile loop around Magnolia and Discovery Park. It is about 6 miles on pavement and three miles of trails. The first thing I noticed was how the tread squirmed on the concrete. Like my Schwalbe Nobby Nics at 25 psi on tarmac! The second thing I noticed was the grip: no slippage up steep hill on a black slimy fungus laden concrete of our residential sidewalks. Even wet manhole covers felt safe. The third thing I noticed after about 3-4 miles: these shoes felt like any other shoe I ran in, just so much more comfortable. And finally on trails, these treads stuck to wet roots, decaying leaves covered wooden stairs and bridges and rocks like the proverbial shit to a shirt (OK, it is a Czech proverb). 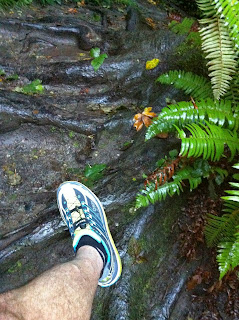 I understand, these kickers are made for a much more abuse than I will ever be able to subject them to, but the comfort, traction, and hopefully some positive effects on my knee joints make them the best running shoes I ever owned. I suspect that when the Rapa Nuis arrive in two months, I will make another trip to Seven Hills.