Careful What You Wish For

At the end of 2013, record low temperatures were recorded in Seattle and around. Everybody complained about how dry December was, how terrible there was no snow at ski resorts etc. I actually liked the dry weather a lot, cold and dry, I don't mind. One can go running any time and forest trails were in great shape for mountain biking. Thin cover of ice and some snow was good for fat biking.
Then, weather gods, sick of hearing the whining, flipped the switch: a week of heavy rains, strong winds, even lightning and thunder! Three feet of fresh snow in three days at Stevens Pass. Such epic snow conditions dictated setting the alarm clock at 5:30 and hitting the road at 6:30, thinking "I will be there at least an hour before everybody else." Brilliant idea, Jan, the whole greater Seattle area thought the same. First hopeless traffic jam already in Monroe on Highway 2. I stopped for gas and a restroom break, only to find the highway free of cars! Where was everybody? Eight miles before the Stevens summit, I found them all: 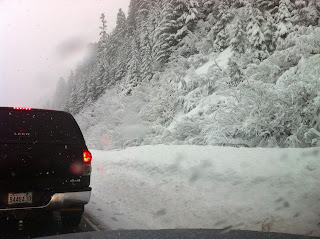 After 65 miles driven in 4 hours, the summit parking lots were hopelessly full. While everybody was trying to park at an RV lot, I pulled ahead and saw a sign saying "Overflow parking 1 mile".  As I approached the overflow lot, the car ahead of me was the last to fit in. No need to despair, another over-overflow lot was 4 miles down the road, actually this was the Stevens Nordic lot where we skied and fat biked on Christmas Eve. This time, I am lucky and I am the last car allowed in. We are shuttled back to the mountain and I buy my lift ticket at 12 noon.
Now, skiing was really epic, 2 feet of powder at the top allowed for falling down chutes, landing in soft cushions of snow, lots of untracked powder among the trees, simply white bliss. Ans it kept coming down in heavy doses.

OK, so the short version of this post so far could have been: I went skiing and got stuck in traffic. Big deal, thousands of other people experienced the same. My original idea for this post was to compare two modes of moving on snow. The first one was downhill skiing. I skied over three hours non-stop, legs burning, sweating and gasping for breath. I made about 15 runs, each time being mechanically transported about 1000 vertical feet. On the way down, I covered terrain I could not even contemplate moving over any other way. Not on snowshoes (too steep), not on foot (too deep snow), not on a bike (duh). My wide skis just flew through deep snow, I can fit tight turns among trees, jump down some small rock outcroppings. All this at speed over 20mph.
Now to the second part: the parking lot where I left my car is connected to the back side of Stevens with a fire road, used by the Nordic center. It is about 4 miles, with a gentle slope down the Mill Creek valley, but it is out of bounds. I figured that I could ski longer, let the shuttles leave, and as the back side lifts stopped running after 3PM, I would drop down the back side, pick up the fire road and skate the 4 miles. As I left the busy ski resort behind, I found myself in a quiet cathedral of tall, snow covered trees. 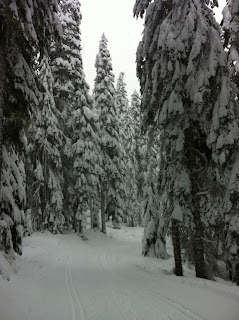 I was able to glide down the first half mile or so, then the road flattened and hard work began. I can cross country ski classic style and I also know the basics of skating, so the technique was not a problem. The problem soon started to be my leg strength, skating with 10 pounds of boot, binding and wide ski on each leg in 5 inches of fresh snow. Soon, my legs started to protest and burn. But there really was no other means of how to move forward, other than shouldering my skis and walking in boots not made for walking more than 100 meters. And so I skated more, swore and sweated. Fours miles, net downhill, at 33F temperature (it poured rain below 4000 ft) and I was pretty toast when I got to the car 45 minutes later. Excellent workout, but it just showed that for snow sports, having the right gear is a must. Since I already spent money on a fat bike (no regrets!), a backcountry ski setup will have to wait another season.