The first little problem is that we have been getting hammered with snow, I mean not we city dwellers but the backyard mountains. It would not be such a problem if it wasn't for timing: President's Day weekend. Meaning getting up at 5AM, hitting the road at 6AM and facing the crowds. Little problem number two, actually, this one is huge: avalanche danger. With lots of new, wet snow over the old layer of surface hoar, the avalanche danger has become extreme and there have been fatalities. We are lucky to have the NWAC web site, I mean it is probably the most useful web based information I have ever came across. Just check out their YouTube video from couple of day ago: http://youtu.be/2mw7xQgL4eY

OK, so no resort downhill skiing, no backcountry snowshoeing or fat biking. The solution: fat bike ride on a rail trail! And we have a long one close by - the 300 mile long John Wayne Pioneer trail. Arriving at the Hyak sno-park during heavy snow, no visibility and strong winds, I started to question even this "comfort ride" decision. By the time I got going, snow stopped and the freshly groomed trail looked like a highway. 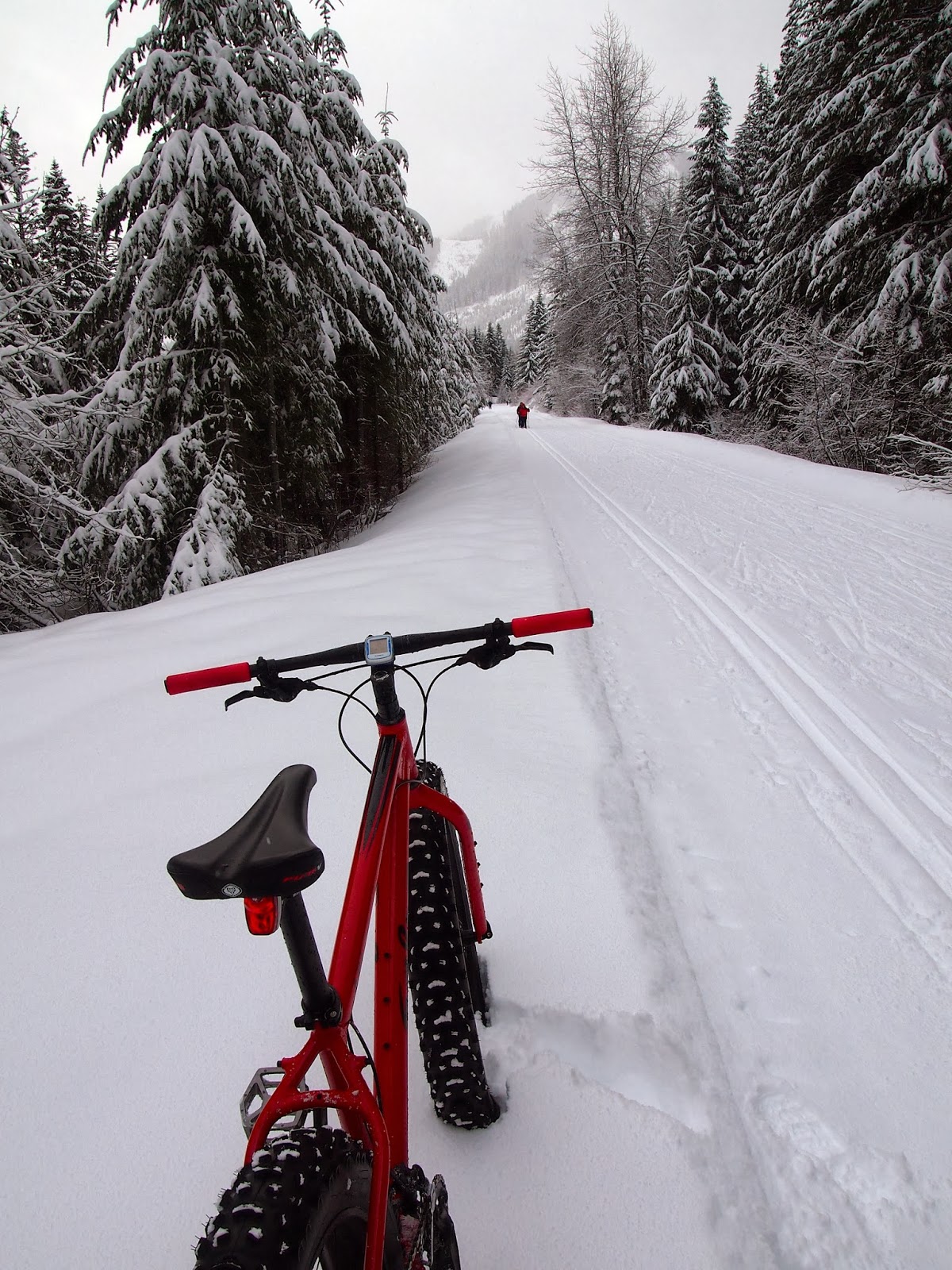 It is about 7.8 miles between Hyak and Crystal Springs sno-parks. The snow was pretty sticky and the corduroy did not help rolling resistance - I think the ribbons of snow actually meshed perfectly with the tire tread, increasing contact area. Riding a straight trail at 6 mph is not that exciting, but I could see the ridges across I-90 corridor, which I climbed couple of weeks ago. I also had to respond to all exclamations and questions about how cool the fat bike was, and with the weekend traffic, this kept me busy. 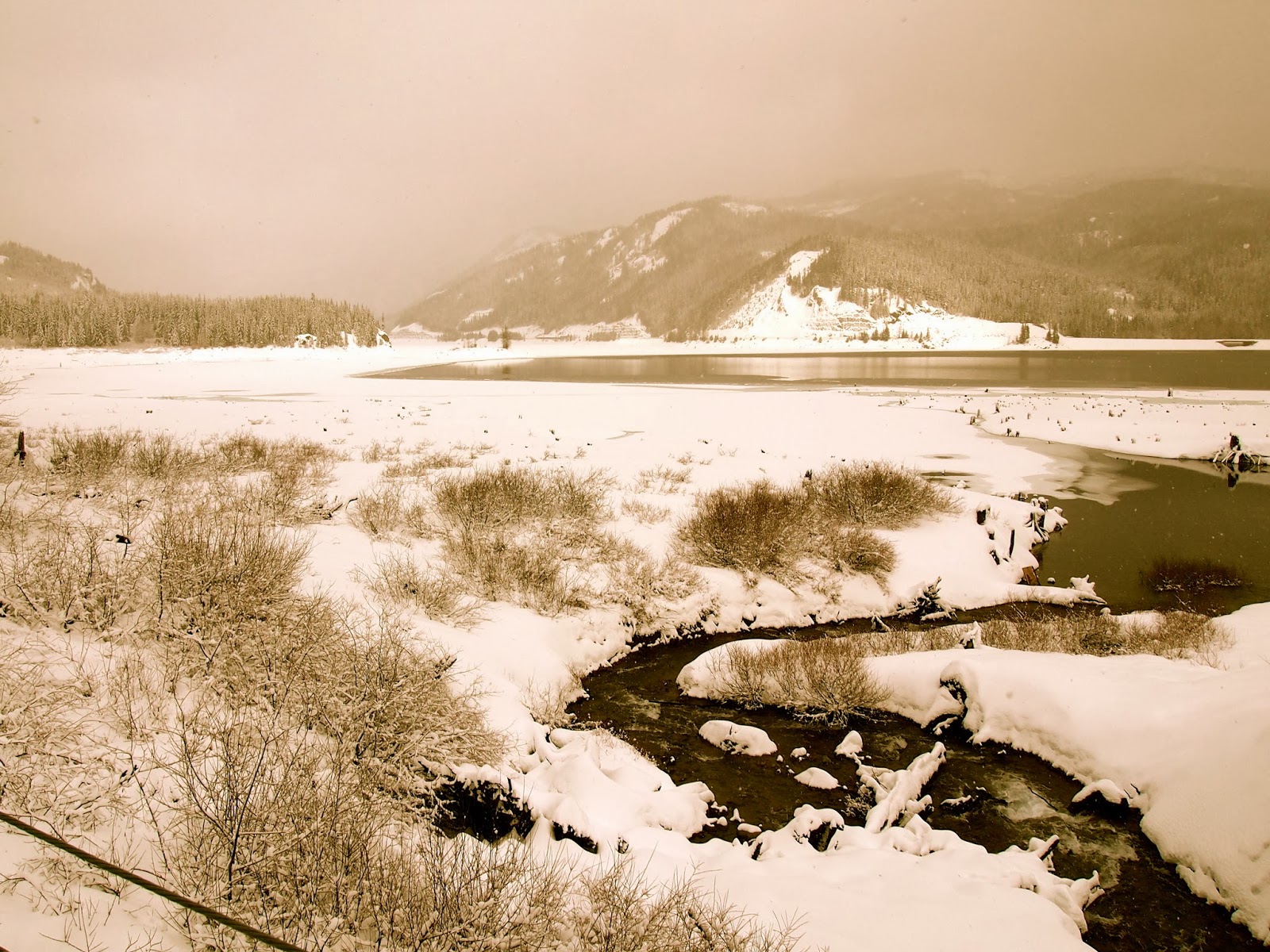 I left the Iron Horse trail and took a dog sled trail, which was more fun, except I had to pay attention to numerous pieces of excrement, man's best friends left on trail. But the weather improved so I did not give a s...t. 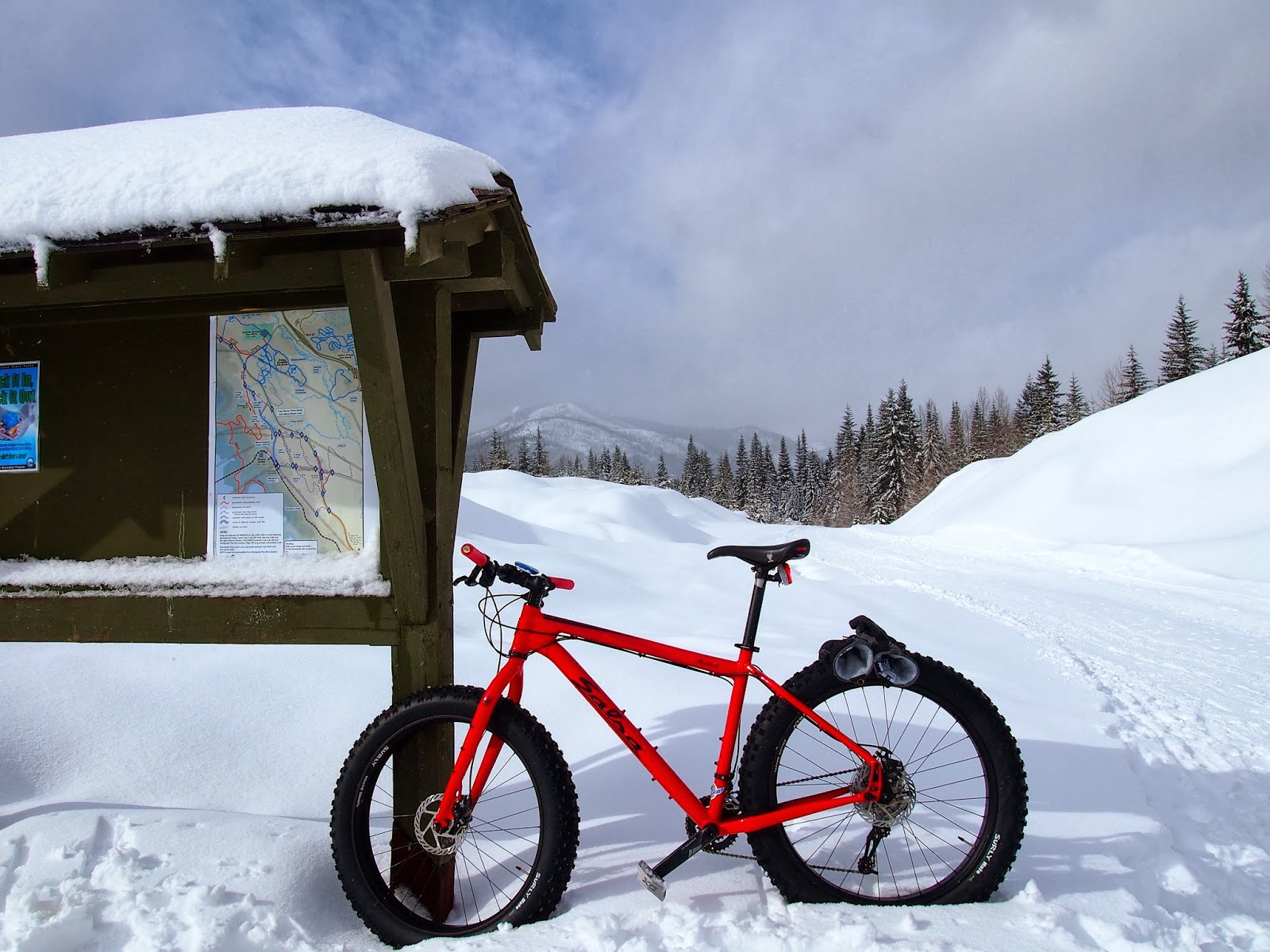 Wedged between the Iron Horse trail and I-90 is an XC trail system called Erling Stordahl trails. Few skiers have just broken fresh tracks in over a foot deep snow. I did not think I could ride here without frequent walking and damaging the tracks, but I tried to ride the untracked snow on a side, and to my astonishment, this felt actually easier than riding the groomed trail! 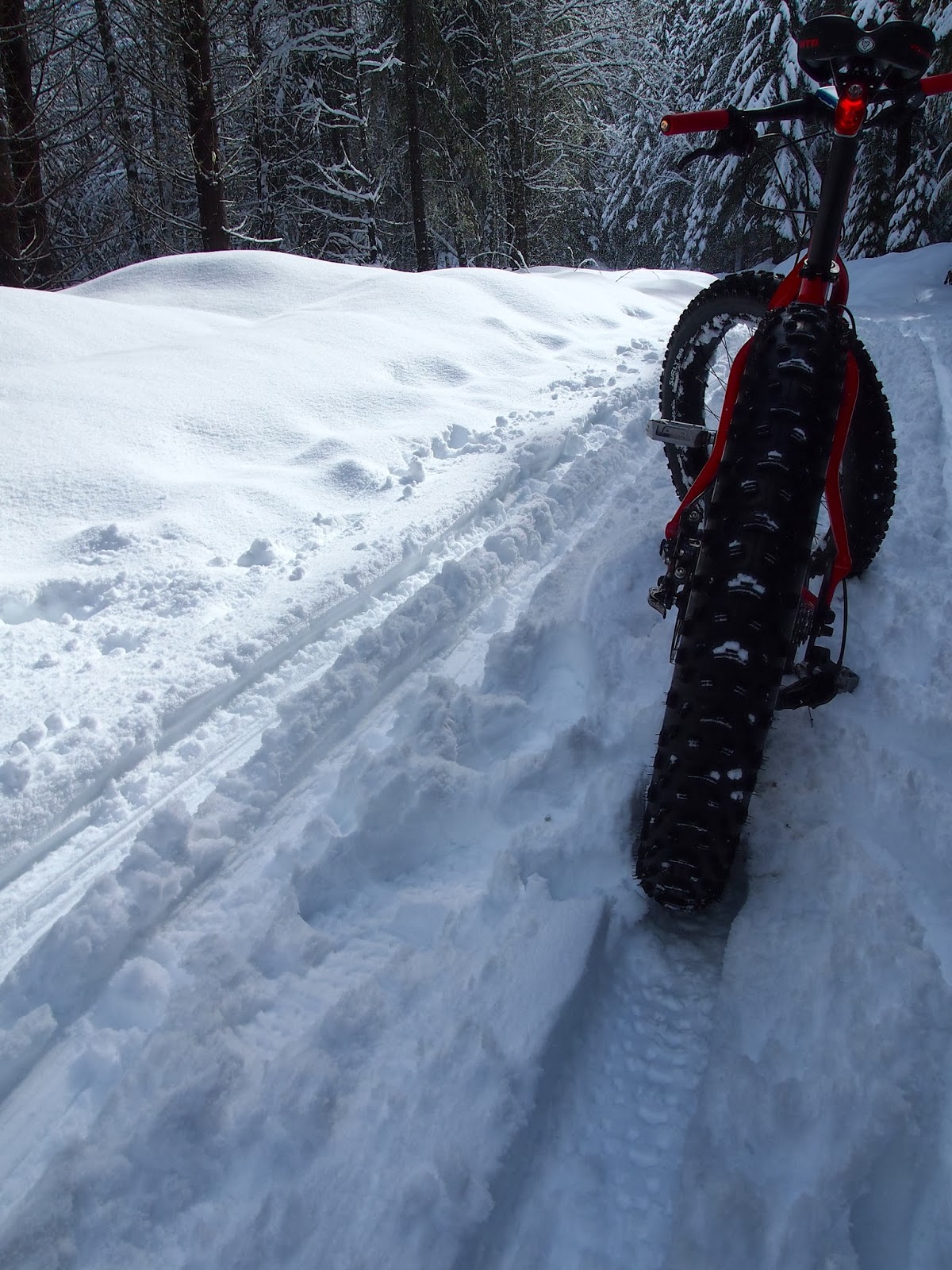 The photo above shows that I was making a track as deep as the ski track on the left and despite being wet, the snow was fluffy and compacted really easily. I really enjoyed riding in deep snow, until the trail pitched up. That's when it become clear how much work this was going to be. I tried my best, but at a steep climb, I pushed. Turned out, the skiers walked here, too. On top of the climb, under power lines, was a large group of skiers hesitating to start descending. No wonder, the trail plunged down at a scary angle here. Advantage: fat bike. I glided down with no problem, just feathering the brakes since the natural wheel resistance in deep snow worked as a landing parachute on a jet fighter.

Completing the XC loop took a lot of my strength, so I was glad to be back on a groomer. A skier mentioned that "they just groomed the trail all the way to the Meany Lodge". A lodge? A mental image of an alpine restaurant started to float in my mental vision, complete with a sun deck, espressos, Austrian pastries and red - blue - white umbrellas with Cinzano printed on them. So I gathered my remaining resolve and rode up towards the lodge. The olfactory hallucinations of fresh coffee and warm struedel pulled me up a bitching climb, I guess 500 vertical feet in about 0.8 miles. I strated to suspect something when I crossed rail road tracks among signs saying "Private RR Crossing!" and sure enough, I was soon surrounded by No trespassing and Private Road signs. But since the trail was groomed, I did not give up. At the end of the trail, there was a lodge, allright. 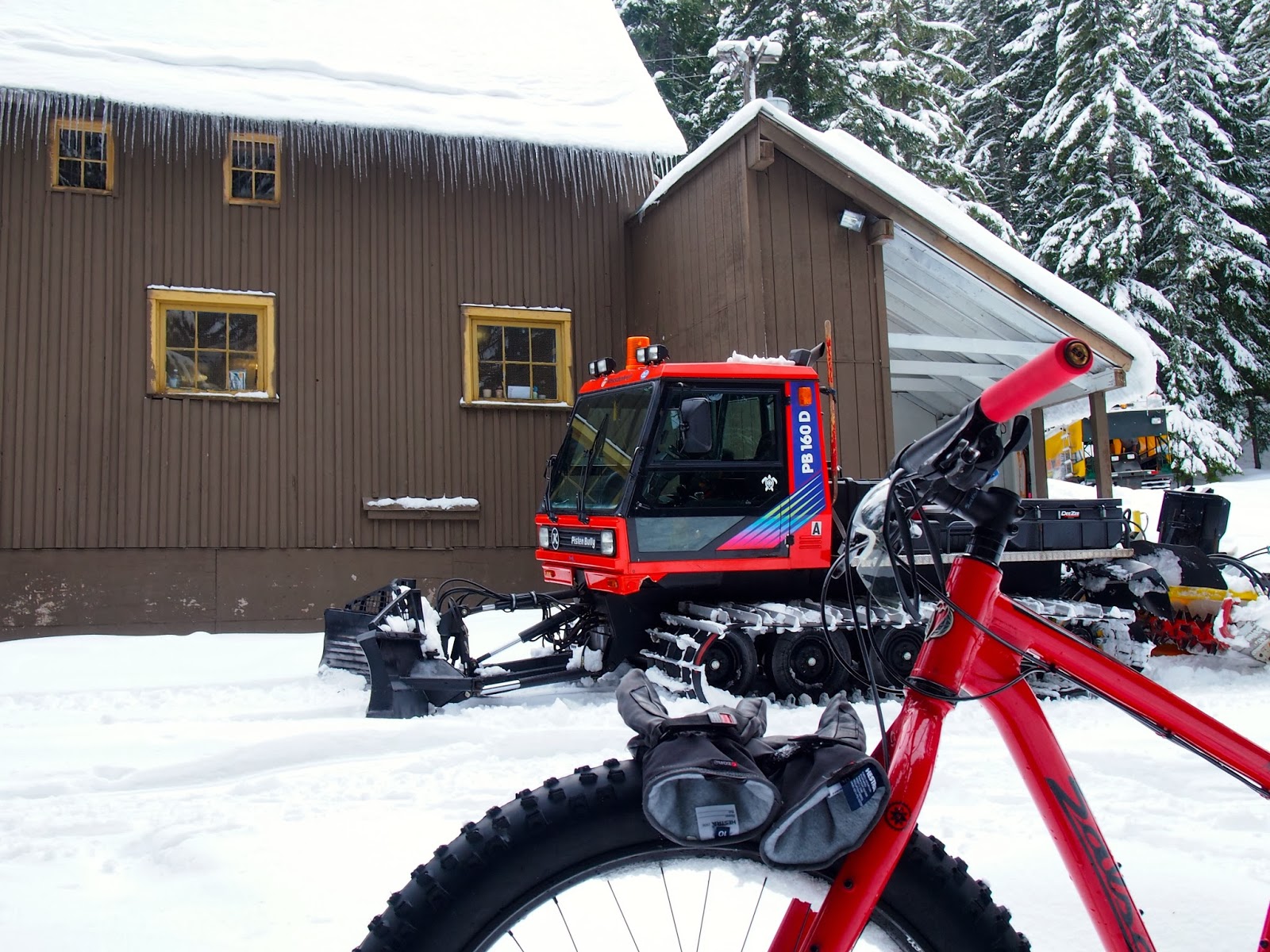 The place belongs to the Seattle Mountaineers, who also have their private ski hill above the lodge. People here were really nice and let me refill my Camelbak at a basement bathroom. A Clif bar and fresh mountain water had to do. The downhill from here was super fun, but back on the Iron Horse trail, with about 8 miles to go on a very slight uphill grade, I realized how toast I was. I spun the pedals and tried to avoid looking at the GPS not to get demoralized by the rate of progress. Saddle numbness and aching wrists started to feel like I was on the last leg of an 80-mile road ride. But everything ends at some point and so did my 22+ mile ride. On the last four or so miles of this ride, I admitted to myself that I was in no shape to race the JayP's Backyard Fat Pursuit on March 1. And my respect to those crazy men and women who attempt the Iditarod Trail Invitational race with fully loaded fat bikes in those anti-human Alaskan conditions. So I guess, on March 1, I will sit on a sofa and root for the two crazy Czechs, Jan Kopka and Pavel Richtr, who will be racing this year.