People often say that the Bay Area has an amazing variety of micro-climates. While largely true, the summer weather patterns can be divided into two simple categories: sunny and warm or foggy and cold. Depending on where you are, the ratio of these two weathers changes, sometimes dramatically within a few miles.
We always liked South Bay, because it is mostly sunny, the ocean layer is kept away by the tall Skyline ridge, and if some clouds spill into the valley, sun will burn it off by 11AM. When we lived in San Carlos, just south of 92, and I worked in South San Francisco, I had to deal with the worst weather a bicyclist (or a runner) who works regular hours can imagine. Foggy and cold in the morning. I tried to go running at the Belmont XC course, but quickly got tired by the damp cold mornings with no visibility. Bike commuting to the South City was challenging, too: the sunny hours of the day were spent inside the building and as soon as the fog started to blow down the hill in San Bruno, I climbed up steep hill with freezing wind trying to flush me back down to the valley. At least, the ride was downwind along the Skyline.

I used to ignore the East Bay somewhat (except for road rides to Mt. Hamilton or Mt. Diablo), I never paid much attention to the weather patterns there. Being in Pleasanton now for close to 6 weeks, I realized that even here, there can be a strong daily pattern: The Pleasanton ridge is a barrier to the fog, keeping the town of Pleasanton sunny, but pleasantly cool overnight. The I-580 gap lets lots of fog in and San Ramon and Mt. Diablo are often under a thick marine layer. When this pattern is strong, it is comfortable in town while the ridge is very windy and cold. This was the case for a trail run two weeks ago, when the cold wind forced us to wear headbands and vests. 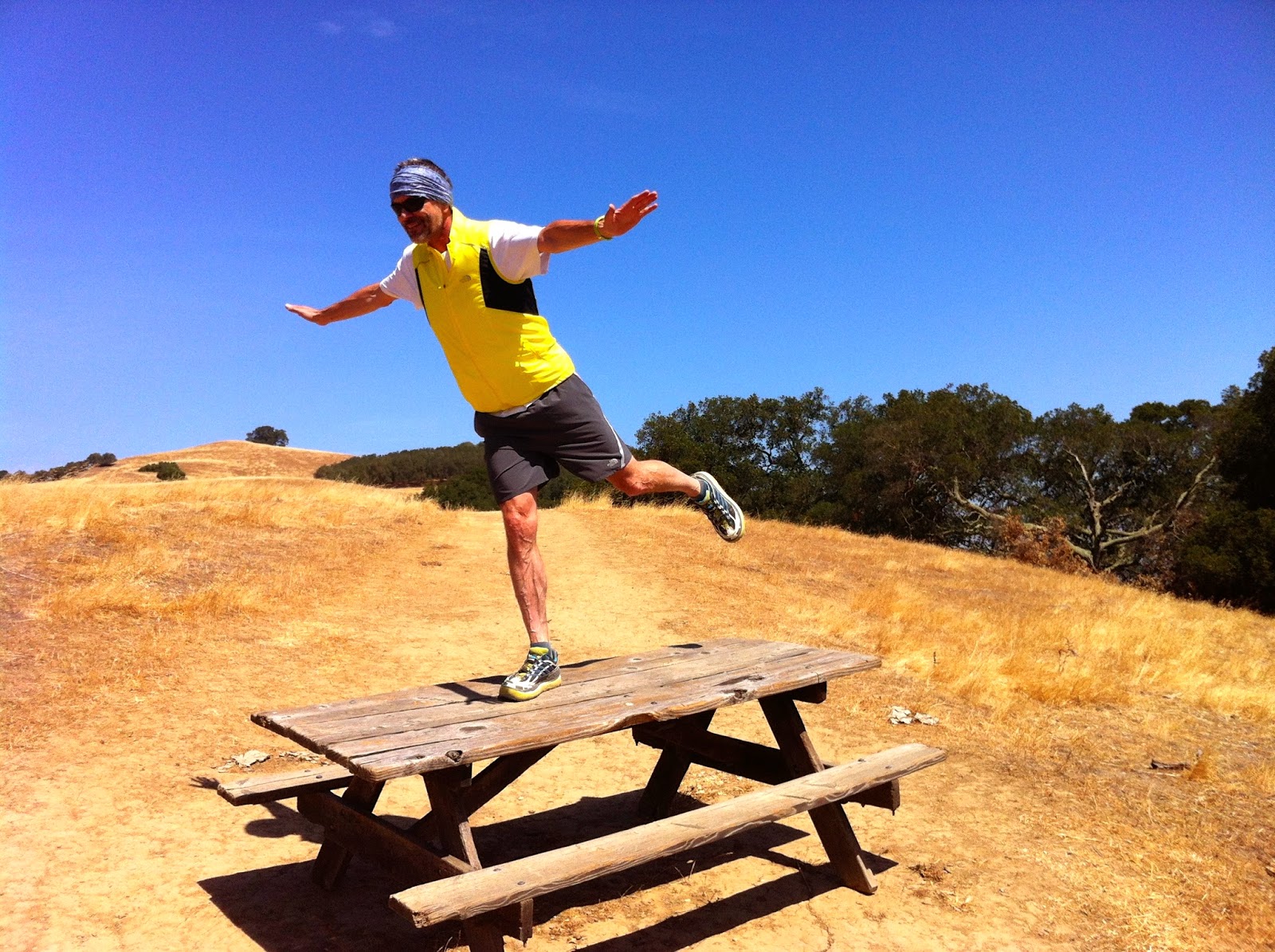 But in many protected valleys, it was hot, combined with the very steep terrain, it was difficult to stay cool. 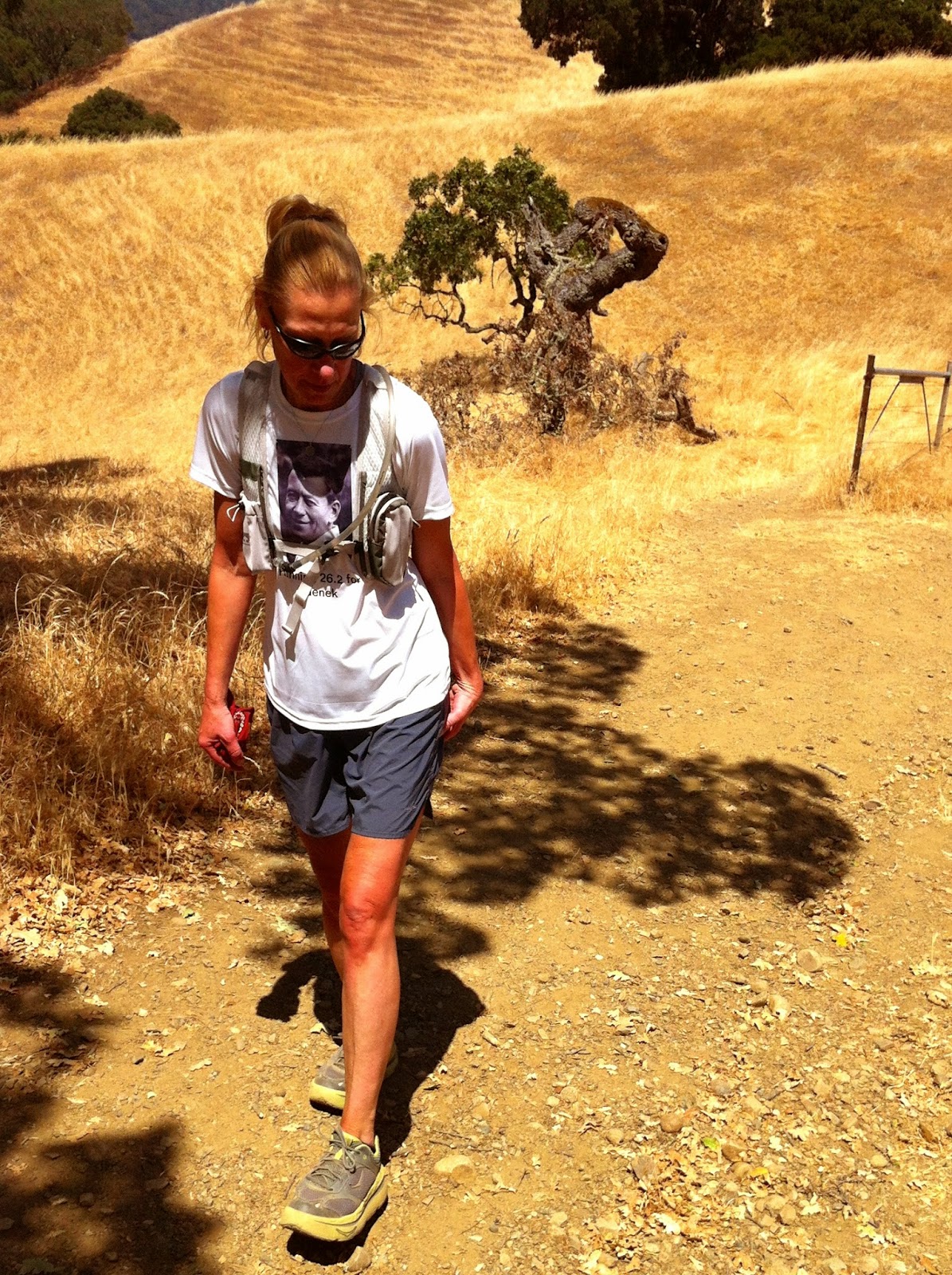 Last Thursday, I rode after work up Pleasanton ridge, starting on the Foothill Rd and climbing up the Golden Eagle Rd to the Augustin Bernal Park. Once on the ridgeline trail, there was a nice breeze. As I progressed north, the breeze became a howling cold wind. Even the sheep seemed cold, despite their thick wool coats. By the time I reached the northern end of the North Ridge Trail, I was quite cold. Jumping three gates and trespassing on some private land kept my adrenaline high enough not to notice (I was trying to find a connector to trails at the Preserve). 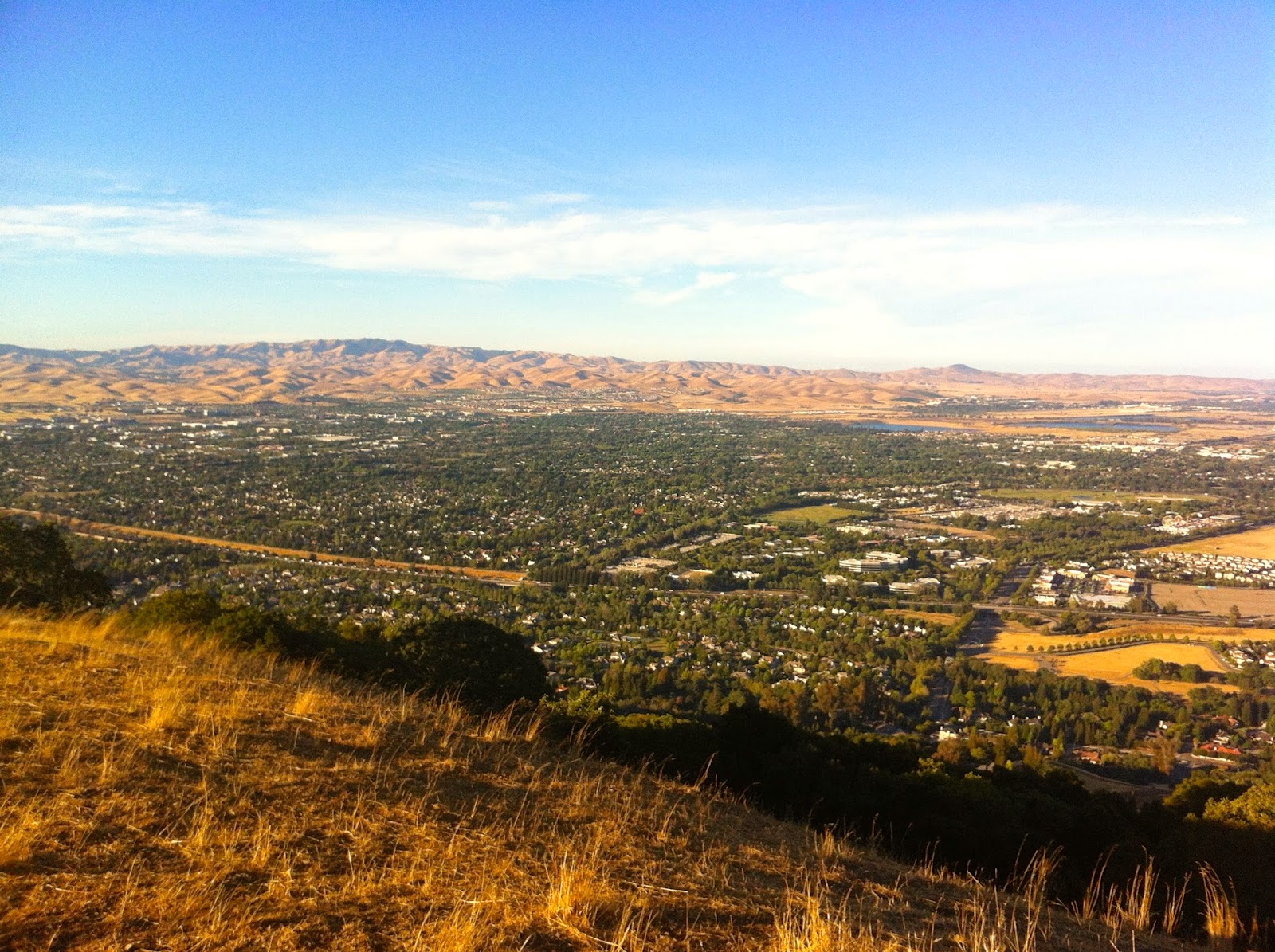 Saturday forecast called for increasing temperatures, reaching 97 on Sunday and 99 by Monday, meaning the onshore flow was weakening. I picked the cooler of the two weekend day for a run at the Sunol Regional Wilderness.  This is a beautiful park, with quite diverse areas. The canyon is shaded by trees, and there is even a rocky gorge aptly named Little Yosemite. 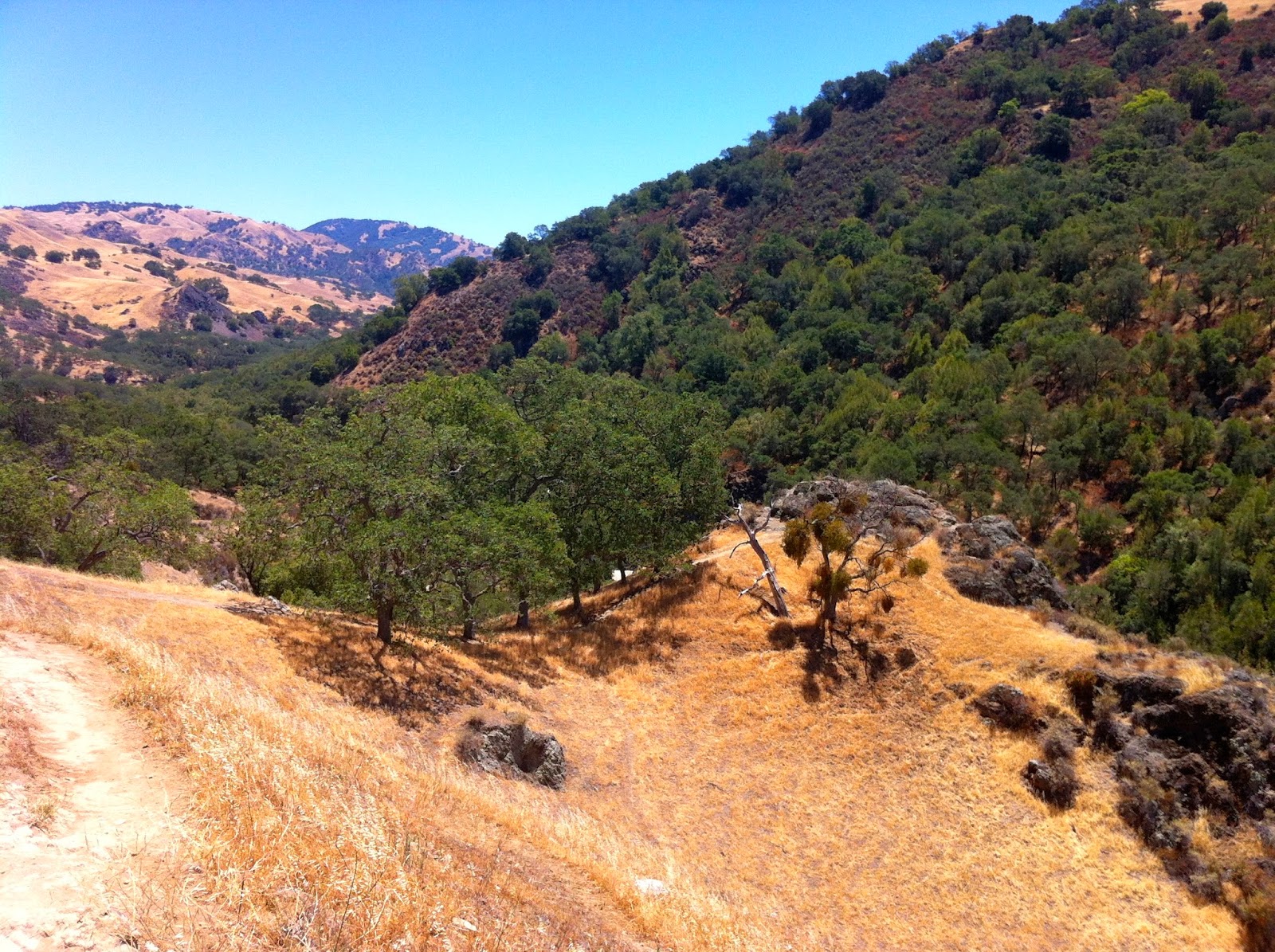 I don't know how little water flows in the Yosemite Falls this summer, but Little Yosemite had little of it. There were some kids splashing in a pool upstream, and enough water to pour on my head and back to cool of. 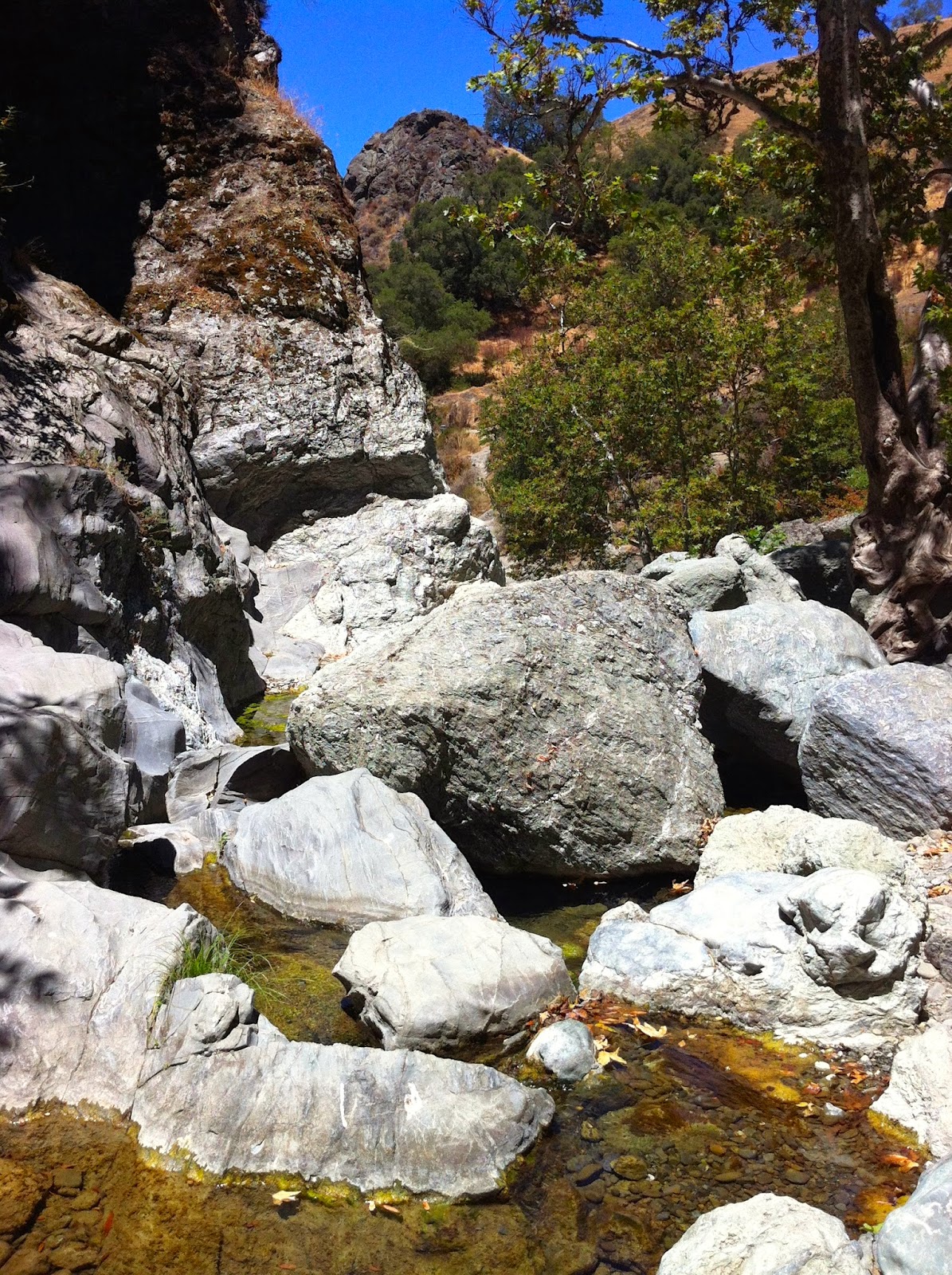 A 1.7 mile steep climb on Cerro Este was next. First I tried jogging, then fast walking but soon, I was walking and slowly. The grade was super steep and surface loose. This trail is open to bikes but I did not see any. No wonder, I think it would be very difficult to maintain traction uphill or downhill, even on a 29er. Trails like this could be perhaps ridden on a fat bike, if one had the strength to pedal the 35 lb beast up 20% grades. 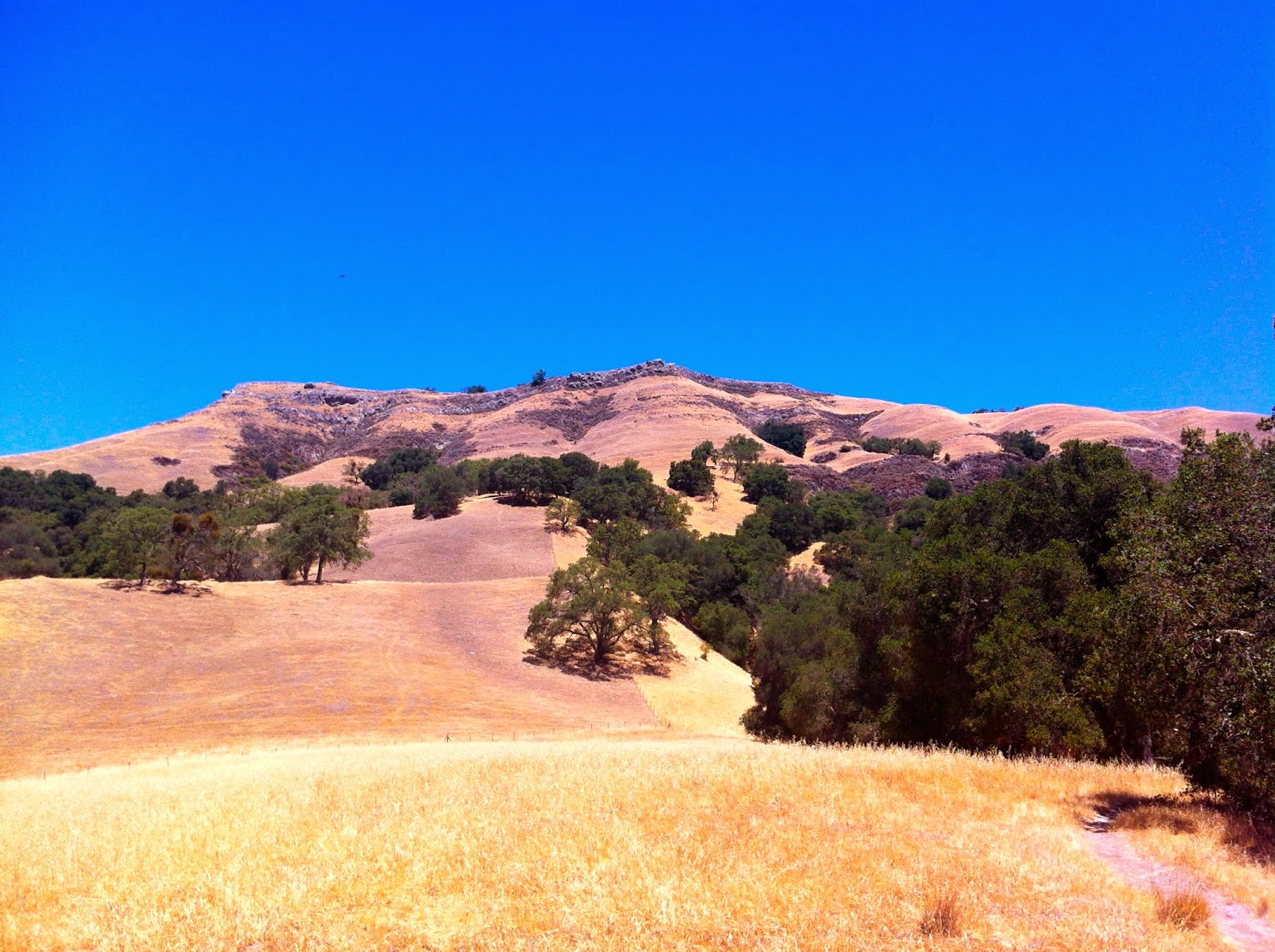 After reaching a high point on Cerro Este, where a trail splits and continues towards the Ohlone Wilderness and eventually to Del Valle Lake, I ran along the ridge with some interesting rock formations. 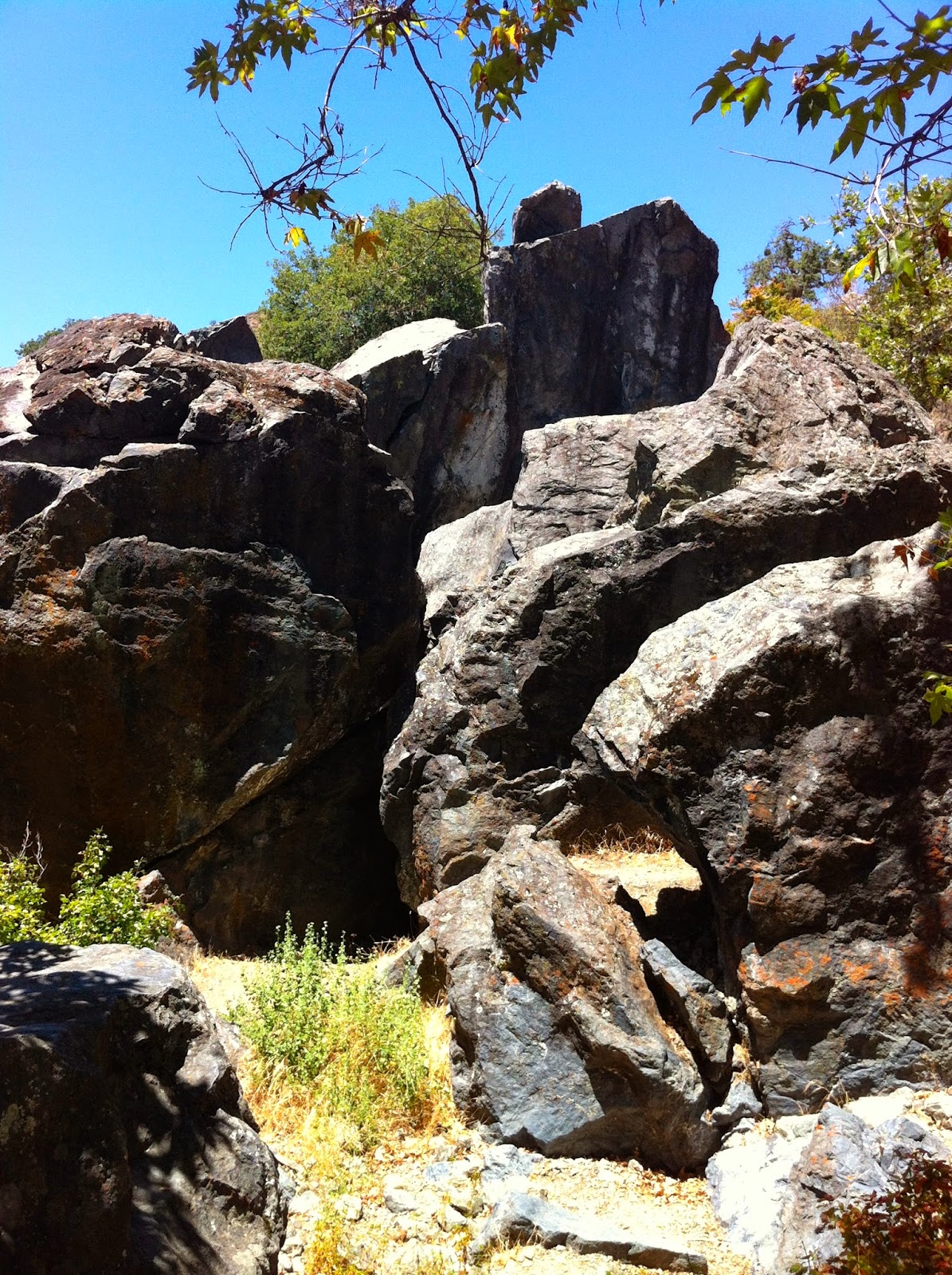 The final leg downhill along the Indian Joe Creek was lovely - next time I have to try this loop clockwise.
Feeling quite wiped out and dehydrated after Saturday slog, Sunday was supposed to be a recovery day. I guess I feel well enough these days as to chose an active recovery method. I went to explore Pleasanton neighborhoods and bike paths. By the time I left the house, it was 97F and no wind.
We have crushed gravel paths along the irrigation canals here, one of them, Arroyo Mocho right behind our house. This one connects to the Centennial Trail and Arroyo Del Valle. Close to downtown, the Pleasanton town bike path even becomes a rocky singletrack with few switchbacks! 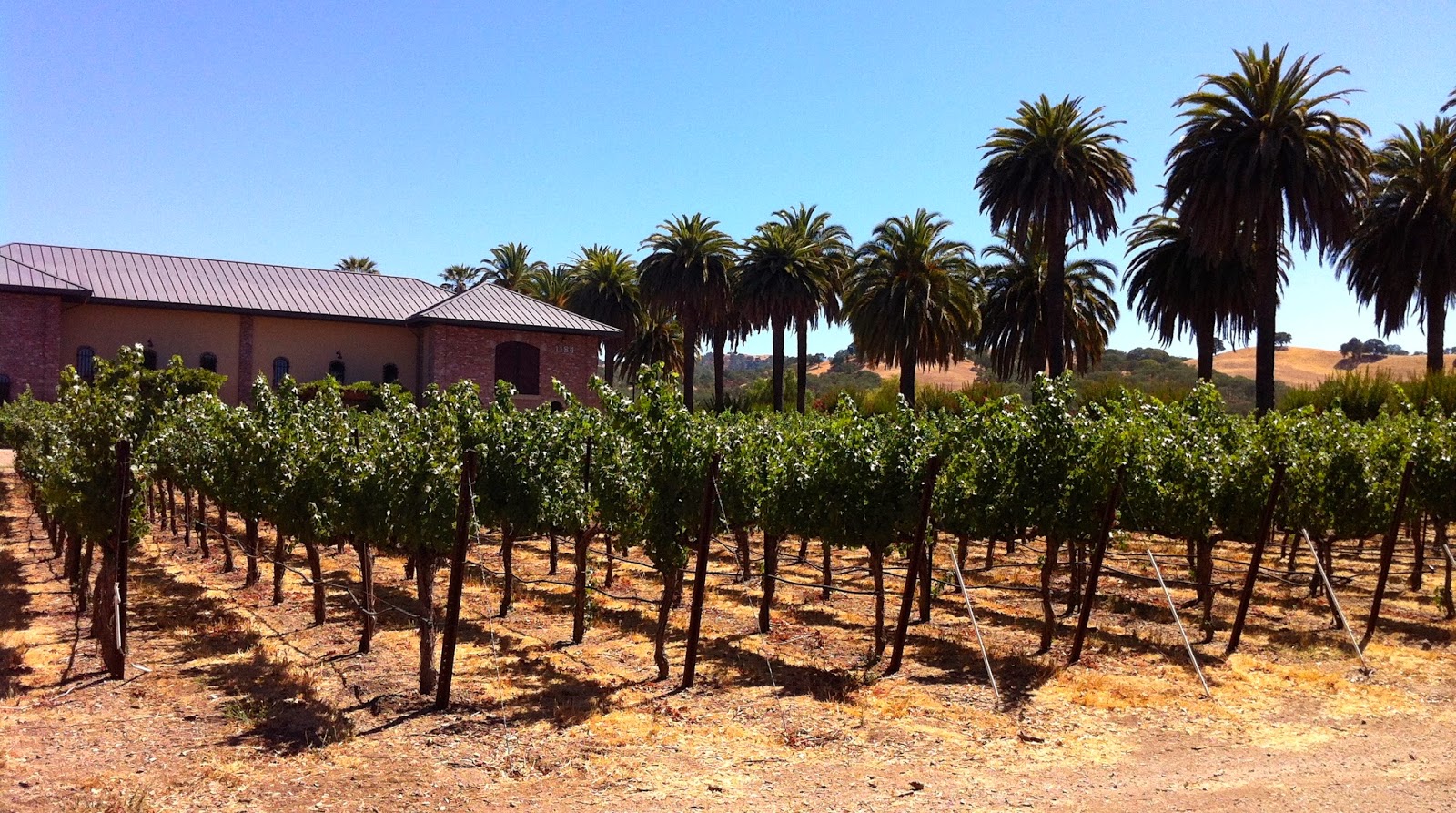 When the bike path ended, I continued on Vineyard Avenue towards Livermore, along some vast vineyards and quite a few opulent wineries. Right after crossing 84, I picked up Arroyo Del Valle regional trail again, which goes through some interesting old ranch lands and eventually spits you out right across the huge Wente Winery. Just 0.2 mile up the road is a trailhead and parking lot for northern access to the Del Valle park. The fire road on photo below looks quite benign, but it steep, I swear. I was hot, tired, my corneas and nasal mucosa seared by the dry air. My computer showed 15 miles and it was another 5.8 miles to the nearest shore of Del Valle lake, so I turned around. 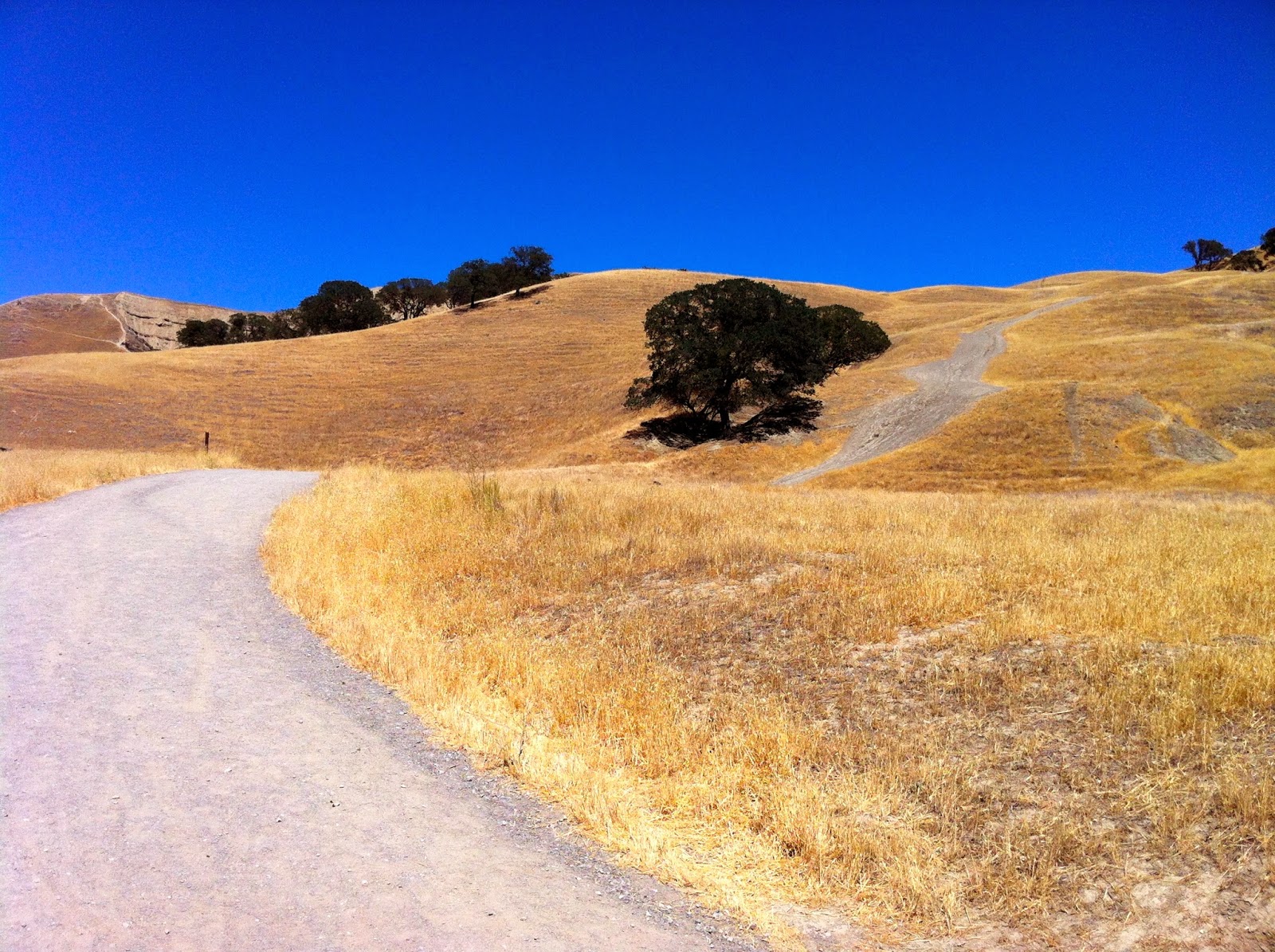 After 30 hot, dusty miles, I did not regret not going for a swim in Del Valle lake, since our pool is nice, and has the advantage of a freezing cold Pilsner being just 2 minutes away.