A week ago, in the allergist office, the doctor took the stethoscope out of her ears and said: "You are wheezing. Double up on your inhalers for the next three weeks." For some reason, the fall season transition is always the time I feel my allergies worsen. But after many years of living with it, my threshold for self diagnosis has lowered and it took a medical exam to reveal some sub-clinical inflammation and pulmonary obstruction. The long story short: got too busy at work, called for refills on Friday and got an automated message that my meds will be ready for pickup on Tuesday. So I left for South Lake Tahoe on Friday afternoon hypomedicated, but very much looking forward to ride trails that should be in prime shape after Thursday rains. The forecast called for another front bringing rain into the area on Sunday. 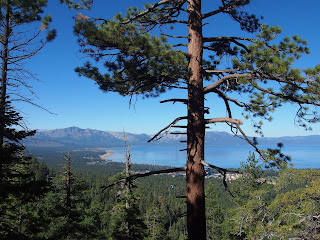 On a cool Saturday morning, I started my ride from the beach in SLT and climbed on Van Sickle trail, over the Nevada state line towards Heavenly ski resort. My plan was to complete the 30 plus mile ride, sometimes called the Punisher (there is also the Uber-Punisher, double the distance), which follows the Tahoe Rim Trail over some high passes and descends from Armstrong Pass back to the lake. Van Sickle is vane sick climb, littered with countless rock step ups, that require lots of oomph to lift the front wheel over. Here I had just enough oomph to do one or two of these steps, then walked the next three, thinking that my heart was about to escape my chest cavity through the esophagus. As I gained altitude, my sickness was getting worse, so as I crossed multiple ski runs, I took the smooth but steep service road to the top. Back on the TRT, the trail cut into several canyons while being perched on a steep slope with quite an exposure. 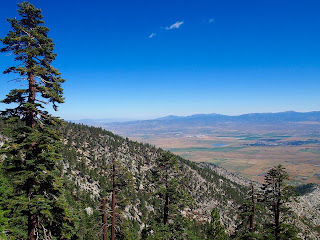 Skirting the eastern slopes of Monument Peak, views towards Nevada opened up, but as I approached the split with Monument Pass trail at about 8,600 ft, the technical nature of the trail and the lack of oxygen in my blood forced me off the bike. I got to the trail junction, just mere 10 miles into the ride exhausted and dizzy. It took me almost two hours to get here and I knew I should get going but needed some rest and sugar. 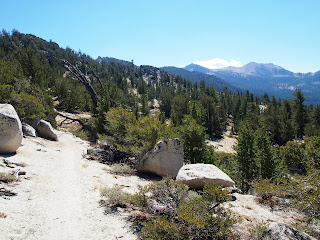 I could see the high point of my ride from here - Freel Peak (the bald mountain on the horizon in the photo above) and this perspective just added to my feeling of biting just too much to chew. The trail continued to climb gently but it took lots of effort to keep going, partly also due to loose decomposed granite trail surface. 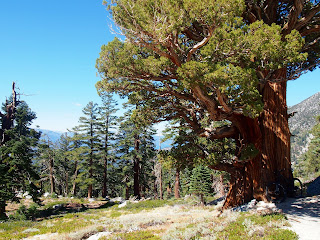 But it was so beautiful up here! Cool breeze with occasional strong wind gusts, signalling weather change, excellent visibility and total solitude. My plan was to reach Star Lake and decide if to take a shortcut back down on Cold Creek trail. I rode this trail back in May and knew how technical that downhill was. I secretly hoped to have enough energy left for the Armstrong trail down. 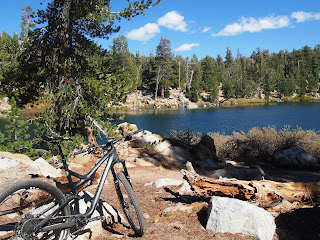 Compared to how many people I saw until here, Star Lake was a crowded beach resort. I saw about five bikers here and spoke to couple of women who assured me that the next five miles to Freel Pass was a great trail not to be missed. So after another bar, a short hike a bike that (again) spiked my heart rate to some triple digit number, I continued south and up towards a saddle below Freel Peak. 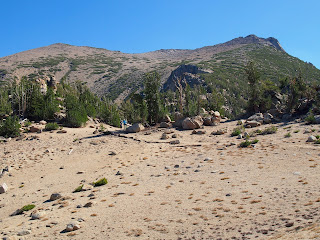 I crossed the saddle at 9,800 ft and did not linger around here. The wind was howling. I just saw a rider ahead of me to put his body armor on and then I dropped the seat and picked up speed. In my oxygen depleted brain, it took a while to register that I was actually on quite a technical downhill. I somehow expected the trail to continue climbing towards Armstrong Pass, which is actually at 8,700 ft. The top part of this downhill followed the barren landscape in large switchbacks, often over boulders and with shifting coarse sand under the tires, requiring lots of attention. I rode this section in half dazed state, which was probably good, since I was loose and not afraid. Funny, when I think back, I completely assumed it was safe to ride all drops at speed, letting the bike to handle the rough stuff. Or perhaps it was all my imagination and I actually rode slow while being dumbed down? 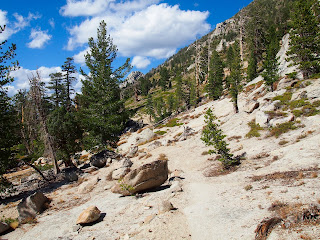 One way or another, I "woke up" when my wheels hit the loamy dirt and rock of the perfect Armstrong trail. To ride here without enjoying every millisecond of it would be a waste of time. This trail flows, jumps, has few scary spots requiring commitment but mostly it is enormous fun. The next section was Armstrong Connector trail, here the riding got really technical, with more than a few spots where a trail "feature" suddenly appeared forcing me to stop and convince myself to walk back and ride it, or scramble and slide down rock faces covered in that coarse grained granite sand on foot. I finished the 10 mile descent on Corral and Sidewinder trails, getting dizzy again on Sidewinder, not from altitude but from the fact that this trail literally folds upon itself and looking ahead means seeing three switchbacks down the hill, unless they happen to be hiding behind tall berms. Sorry, no pictures from this part of the ride: go on YouTube and understand why stopping for pictures was not an option.

I reached the valley still high on adrenaline, called Marketa to be about an hour late and rode back to where I started on the last, eight mile long trail connectors. At this point, I was out of water, out of glycogen and out of any residual strength in my legs. There was still climbing to be done and I stood up and pushed the pedals, thinking that this was it, I was never ever going to finish this ride on these park like trails. A mile from the hotel room, food, water and warm shower, I hit 42 mph coming down Ski Run Blvd, just before stopping at an intersection with Lake Tahoe Boulevard, with continuous stream of traffic. A mile of street between the trail head and the main road divided the two worlds. This ride was a nicely punishing way to close the riding season at Tahoe. 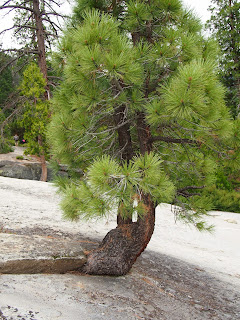