Growing up in central Eastern Europe, our outdoor activities strictly followed the seasons throughout the year. I learned how to ski young, before school age, and always loved downhill skiing. Spending two to three weeks on skis every winter was a norm, thanks to school skiing courses (parts of phys ed), and winter vacations. I never liked to watch sports on TV, but I could easily stay glued to the screen for hours when Ingemar Stenmark or Franz Klammer raced. Long winters could get tiresome and I loved summer biking and hiking trips equally much. So I sometimes dreamed about living in a country where one could swim in the sea or ocean one day and went skiing up to the mountains on the next day. Forty years later, I am so fortunate to live this dream in California, where this is possible.

Over the past three weekends, I made three trips to the snow and each time I used a different equipment for my snow play: downhill skis, a fat bike and XC skis. I thought about sharing some of my experiences and ideas about winter recreation.

Lesson 1:
This was just one of those regular one-day trips to Kirkwood, the closest big mountain to home. Thanks to regular storms during January, snow conditions were great, but the forecast promised a lengthy period of high pressure and sunny weather. So my buddy Martin and I hoped for some last good stashes of powder in the chutes and gullies of K-wood. 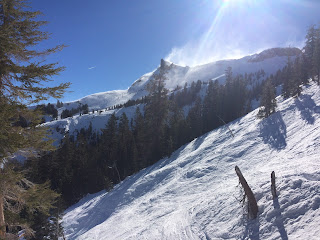 We found them on this sunny, but very windy Superbowl Sunday. We were among the first people on the chair at 9AM and thanks to the big game, it took us fifteen minutes to make a round, out of which 10 minutes was the lift ride up.  We skied non-stop and explored few areas that I never ventured into before. Skiing with a friend whose skills were above mine and conditions that were not "beach" but also not that severe, was tons of fun. 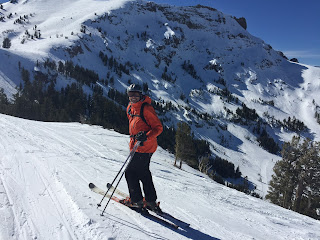 By 4 PM, almost alone on the hill, our legs burned but we squeezed in one last run. We must have done about twenty rounds and with 2000 ft vertical and 2 mile long runs, it was a productive day.
Not every day can be like this one, though, in the Sierras. Traffic, huge crowds and stratospheric lift ticket prices make me often think if this is worth it. From the top of chair at the Wall, you can see pristine backcountry terrain stretching for miles and miles. Not all of it is skiable or safe, but with the right equipment, avalanche training and a few friends, I could see myself leaving the resort bounds for out of bounds.

Lesson 2:
After a week of cold nights and warm days, the Sierra cement turns into concrete / slush, which is not fun to ski on. That's when I started to think about fat biking. The past several winters did not really offer too much for snow biking, but now there was snow at sno-parks and some highways, closed for the season were under many meters of snow. I chose to drive to Lake Alpine on Highway 4. This road is closed in winter, but I don't remember ever driving on it in summer either. It is sort off the beaten path, with highways 88 and 50 being the more traveled routes. 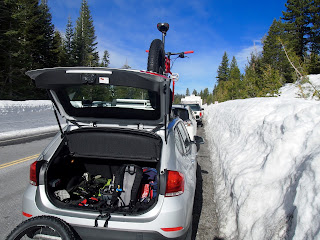 There was plenty of snow at the trail head, and the warm day ahead was likely the cause of the sno-park full and rows of trucks with snowmobiles stretched along the road. I have only good experiences with riding snowmobile tracks and with snowmobilers from WA, but I was a bit nervous here. I attached my red blinkie to the seat post, checked the snow (still firm at 9:30AM) adjusted tire pressure and hit the trail. On a packed trail, going slightly downhill, on a beautiful sunny morning at 7200 ft elevation, I felt the fat biking zen, as described recently by Rebecca Rusch here (some of the best description of fat biking I read so far). 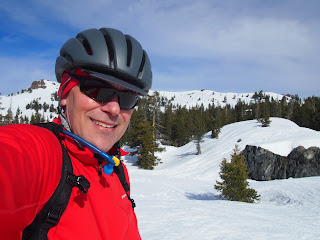 By mid morning, the hard work started. Warm air, sweat, snow turning soft, and yes, it was uphill - my destination was Ebbetts Pass at 8,736 ft. I looked at all the terrain surrounding the highway - not a ski track in sight! If this was the Cascades, I'm sure the hills around me would be criss-crossed by multiple skin tracks and turns. Roughly half way through the ride, the road descended steeply into Hermit Valley. This was a fun downhill thanks to still firm snow surface in the shade, but the climb from the river up the pass was grueling. The views were stunning, there was nobody around me (a few snowmobiles passed me in the same direction I was riding but none came back). 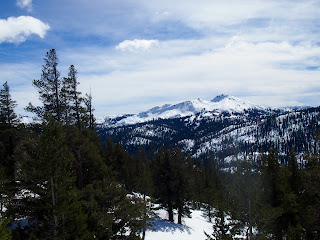 I could ride most of the climb, but as I felt my legs getting weaker, I worried about the return leg - the climb out of Hermit Valley to Lake Alpine was going to be lot steeper and I expected afternoon temperatures to turn the snow into slush. Fat biking is hard, so on the last mile to the pass, I just stared at my front tire, trying to stay upright and concentrate on every crank turn. Not fun. 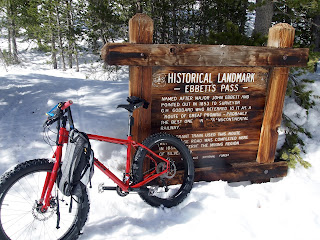 When I finally reached the place where Major Ebbett thought about the transcontinental railroad, I was spent. I ate my lunch in a weird state of fogginess (too many pseudoephedrine decongestants for my middle ear?) but I looked forward to the descent. The snow did of course turn super slushy by now and despite letting lots of air out the tires, traction proved to be tricky at speeds above 10mph. Navigating the snowmobile ruts, the front wheel pushing into turns and sliding, avoiding brakes, it was like learning to ride a bike again. And at 10mph! As I expected, the climb out of the valley was done by pushing the fat beast up, at least 80% of the distance.  My frustration and diminishing energy levels were somewhat compensated by my encounters with the snowmobile folks. One older woman driver mouthed what I interpreted as "You are a brave soul!" but in the roar of her engine, it could as well be "You are an a...oul!". Another guy stopped and chatted with me for a while (I loved how he screamed at me, being deafened by his engine noise, so I did not have to explain it was me who is deaf!) and concluded by saying "Its great to see you out here". Lots of people greeted me and one young guy yelled "You are a beast my friend!"  Yes, back at the car, I really felt like a beast,  gutted, skinned, skewered and well done.
So is fat biking "fun"? Yes and no. It is certainly a means of enjoying biking in the winter, but it can be really frustrating, if you know how much more fun would the same trail be in summer on a 29" FS trail bike, or if you are a skier and know how efficient moving on skis is. Fat bikes are highly specialized equipment for few enthusiasts and the ongoing evolution of even fatter tires and crazy frame geometries (unsuitable to riding these bikes on dirt) just illustrates how even the most dedicated fat bikers haven't found an ideal solution yet.

Lesson 3:
Since I have upgraded my Mac OS to Yosemite, the winter El Capitan wallpaper kept reminding me that we haven't been to this park in a winter yet. Continuing warm weather made a downhill ski trip less and less desirable, but I like cross-country skiing and a trip from the Badger Pass ski area to Glacier Point seemed like a pleasant way to spend a weekend day. 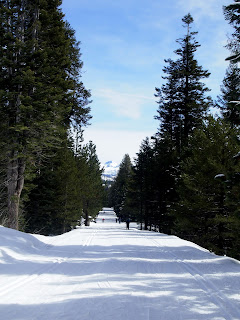 Glacier Point road is a groomed XC trail in the winter, and many people use it to access huts and winter camping sites on the Yosemite Valley rim, for overnight stays. We thought since XC skiing is "lots" faster than running, we could make the 22 mile round trip in about four hours, to return the rental equipment by the time the shop closed. It was very warm, snow was soft and the trail was far from flat, so this skiing turned into a highly aerobic exercise. 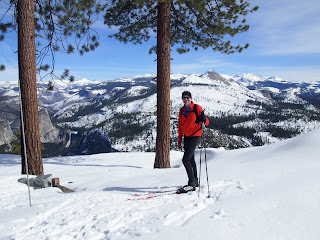 The last couple of miles to Glacier Point, the road drops steeply down and winds through the woods before the views open up.

At the turn point, I ate my lunch standing in a hurry, counting the time I needed to get back in time. As I climbed back up towards the Taft trail, sharp heel pain reminded me that the rental boots were indeed half size too small, the blisters burst and the remaining eight or so miles were going to be fun. I thought that I would make up for lost time (taking pictures) on the downhill, but the slushy snow was slow and my speed was low. I was going too "fast" for efficient strides and kicks, but too slow to win the race with the clock. At the sign that signaled 2.8 miles to Badger Pass, I had 15 minutes left. I felt defeated and tired and for the rest of the trip, I stared into the groomed track ahead of my ski tips, thinking how tired I was. The rental shop stayed open late and its friendly staff made me feel less bad. Still, 22 miles took 4.5 hours of hard work, so XC skiing on this day was slower than running, except that I never ran or could run 22 miles. 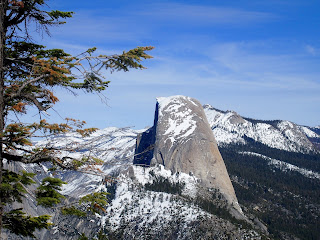 This was a great XC ski trip, don't get me wrong. I like the whole body workout on XC skis and wish to learn the skating style better to be able to ski longer distances. Groomed winter trails in Yosemite are a fantastic way to see the park in its winter coat and get to places so crowded in summer months almost alone. 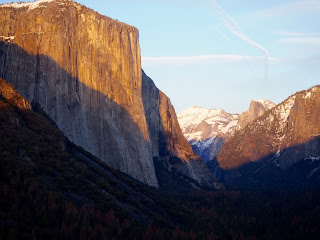 And on the way home, I even got my "Apple" shot.

In conclusion, which of the sports did I like the most? And I left out snow shoeing, which in my opinion is great in fresh deep untracked snow (so is skiing), otherwise why bother. It's all good, but the lure of alpine touring (AT) skiing is growing stronger. Want to join me next winter?