Return to the Holy Land

This post title refers to my recent trip to Seattle for a weekend of mountain biking. So nothing close to biblical proportions. And it is a bit ironic, since during the time I lived in Seattle between 2012-2014, I felt like an exile, for the most part.
I admit, I still have a sort of love-hate relationship with the city itself. When visiting Seattle on nice, sunny days, I love the place. When it's dark and rainy, I think of it as the ultimate hell. There has been one cure for the hateful emotions, and it is the area trails. So when a friend of mine suggested we spend the weekend biking after his business trip, I did not hesitate and booked my plane tickets. I have been also following trail building activities of the Evergreen Mountain Biking Alliance since I left, and I knew that many miles of new trails have been built.
Equipped with decent quality rental 29-ers, we headed east on I-90 to Issaquah. The plan was to warm up on Grand Ridge, do a loop around Duthie and perhaps explore one more trail system in the afternoon. 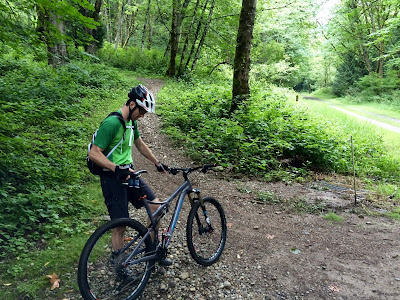 The trails were damp after some recent rain, but the weather promised to improve steadily over the weekend. After some final bike adjustments, we started climbing and soon we were surrounded by ferns, cedars and whatever else that makes these woods so green. 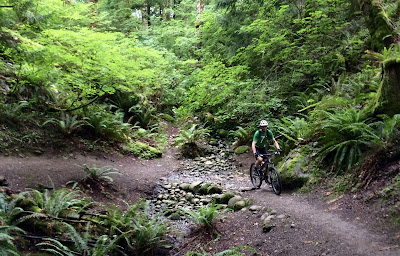 The nontechnical Grand Ridge trail is still lots of fun. It is not very easy, there is good amount of vertical change, but it allows one to work on perfecting the turns, try just a bit more speed into the next switchback, or simply let the bike do its job while enjoying the scenery around. 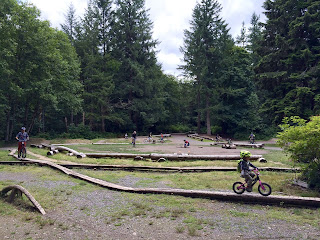 We soon reached the Duthie park and started our XC loop. This trail meanders around the center of the park, with a practice area and a rain shelter. Countless downhill and freeride tracks intersect the XC trail. At few points, the XC trail is routed underneath wooden ramps and other MTB "furniture".
We stopped at the practice area and tried to ride narrow (but low) logs, with variable success. Well, we just do not have the practice like some of the local kids do. 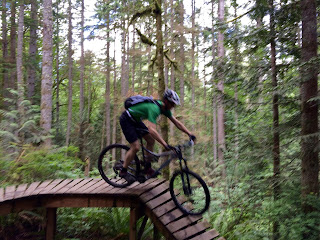 Pavel was the one trying some of the features, but then, he is lots younger than me. On one particularly slippery platform, he tried to use his front disc as an axe and chopped off a good chunk of the bridge while his front wheel skidded off the track. The wood won and the disc rotor was a taco. 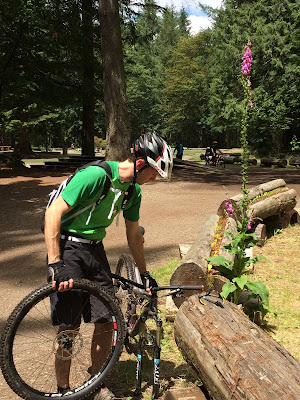 We spent a good amount of time using tire levers, wood sticks and our legs to kick the rotor back to some planar shape, but it would still not clear the fork leg. Then we discovered a bike repair stand and a toolbox in the shelter, thanks to the Evergreen saints! So we managed to straighten the rotor well enough to make the front wheel rideable and rode back. Grand ridge has one strange anomaly: it feels like lots of climbing in either direction of this out and back ride. When we got back to our car, it was later in the afternoon and we needed to get a new rotor. We visited  few of the reputable bike shops in Issaquah, but neither of them stocked a centerlock rotor. It was finally the REI store that saved us, despite our dumb (but successful) attempt to buy a wrong size rotor, then exchange it for the correct one and even had it mounted. By the time the wheel was fixed, it was 6PM, we were hungry and thirsty, so the local brew pub was the day's final destination.

On a beautiful sunny Sunday morning, we drove to Tiger Mountain for a dose of some more serious fun. Since I last rode here, not one but six new trails have been built here! The grueling fire road climb to the summit has been replaced by the Master Link trail, a climber's delight, with perfect grade and lots of switchbacks and nice bridges. 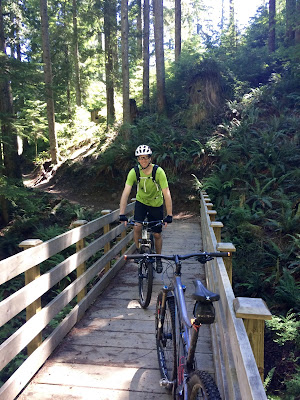 The last half mile on the fire road was made bearable by lots of ripe salmonberries lining both sides of the trail. I knew that there would be good views of Mt. Rainier from the top, but I was not quite prepared for the big hill slowly coming to view as we crested the last meters of the climb.

Our descent first used the "old" E Tiger Summit and Preston Railroad trails, challenging enough to keep us alert, but not so technical as not to let off the brakes often. The trail is built for speed but the faster you go, the more workout it is. My memory of many rutted, root infested sections was replaced with a reality of flowing contours and manageable drops. Many slick rock gardens were still there, but it were perhaps the 29" wheels or the result of skilled trail builders, that made me feel in the groove. 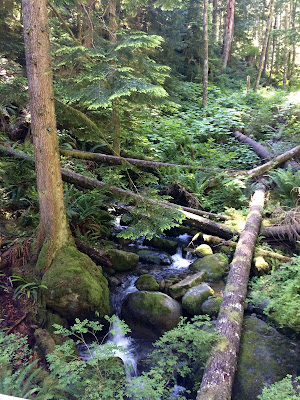 The following two sections (Silent Swamp and Joyride) were true XC trails, with steep climbs and tight drops through switchbacks, reminding me of East Coast trails. The last two miles on NW Timber Trail were supposed to be a relaxing ride, but my tired body and legs protested against any serious efforts.
The day got quite warm by now, and our lunch break in the shadow of trees made me feel like taking a nap. Instead, we rode couple of miles out on West Side fire road to take a technical Iverson Trail singletrack back. Here is where my last molecules of mojo evaporated and I ended up walking some technical bits.
The bikes had to be returned by 4PM, which gave me an opportunity to show Pavel some of my favorite Seattle spots. We admired the Ballard Locks and salmon ladder for a while, then drove across Magnolia to Discovery Park to enjoy another view of Mt Rainier and ended up at Pikes Place Market. 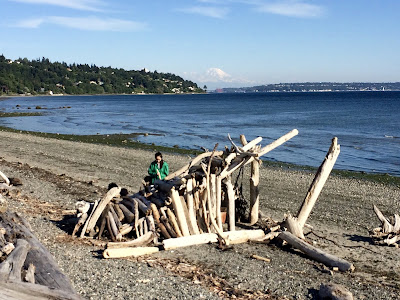 We found a hidden pizza place at the Post Alley and stuffed ourselves with thin crust pies, while recapping the rides. 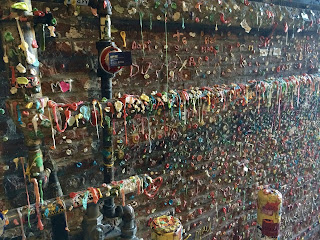 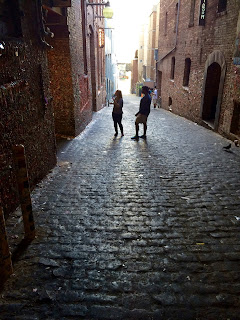 I think that when I told my friend Pavel a while ago that trails in Washington are the best in the world, he took it for a hyperbole. I think I remember him saying that these two days were his best rides ever. It does not really matter, we were not attempting to rank Seattle area trails against other places we rode. These trails are awesome, more importantly, these trails are therapeutic. Here, you can ride ten miles or fifty, the intense feelings of flow, fun and happiness are almost guaranteed. At least, it is how it used to work for me and it still does.
Posted by Unknown at 8:20 PM