I had first heard about the Kalalau trail on the island of Kauai, HI in 2003 during our first visit to Kauai. That year, we hiked the first 2 miles of the trail to Hanakapiai beach, as many tourists do, wearing sneakers. It was wet and our sneakers ended up in a garbage can after the hike. But our appetite to hike the 11 mile long trail along Na Pali coast out and back, was whetted.

So we were back a year later, this time equipped with heavy duty hiking gore-tex boots, backpacks, sleeping pads and bags, a tent, stove, dried meals, camelbaks and water filters etc etc. 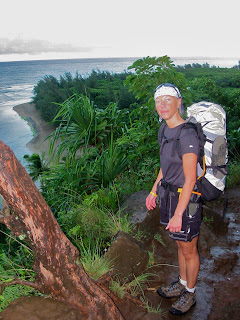 It rained, because it always rains in Kauai, the trail was wet, muddy, slippery, rutted, steep and rocky. It took us eleven hours to reach the Kalalau Beach, so the pace was 1mph. The beach at the trail's end was worth all the effort. 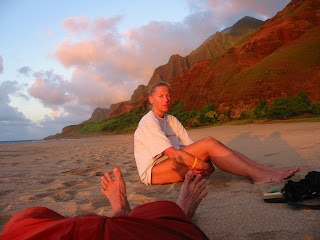 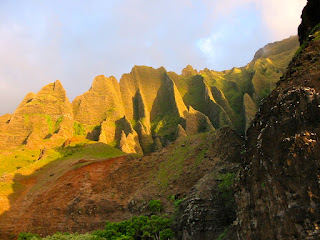 It rained some more on our way back the next day and I remember being pretty desperate about my wet boots, socks and blistered feet. Water got inside my boots not from walking through the mud puddles, but from the top, flowing alongside my legs in rain and every time I dragged my legs through wet vegetation. It was a tough hike. We realized we overpacked a lot and decided that one day, we will be back one day for a fast, minimalist overnight hike.

That day almost happened to be this past weekend. I say almost, because the original plan was quite different: Marketa flew to Kauai to run her third Kauai marathon (and her third this year). But a plane-acquired virus got a hold of her and her taper leisure 5 mile run a week before the marathon weekend ended up in projectile vomiting all over the lush island vegetation. Next, she ended up in bed with a high fever. So I packed all light hiking accessories and went to Kauai hoping that if running a marathon was out of question, the Kalalau trail would be an easier substitute when she got a bit better. By Saturday, it was clear that the virus was a vicious one and plans had to be modified again. We decided on me testing the light hike version and gear by allowing myself about seven hours for the hike and to see how far I would get in 3.5 hours before turning back.

Despite wearing the same T-shirt and shorts as eight years ago (yes, the Patagonia gear is indestructible), I carried a Camelbak with 3 liters, a filter, first aid kit, an emergency headlight, and three power bars. Most importantly, I had put on my trail running Adidas shoes, running socks, and insulated my feet with waterproof gaiters. I also carries spare socks in a ziplock bag as well as thin neoprene socks. 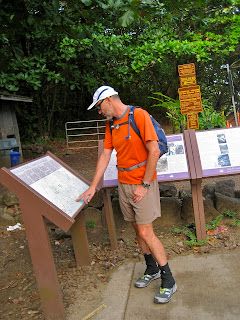 I started the hike at 7:40 at the newly improved trail head, equipped with maps and many signs with long lists of all activities and behaviors prohibited. The first section of the trail was improved hugely, with water bars etc., but it is still very steep and rocky. 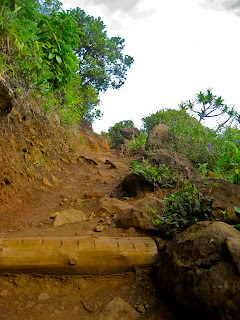 Despite lots of rain the previous week, the trail was completely dry and the first 2 miles to Hanakapiai was a breeze, arriving at the beach in 40 minutes. 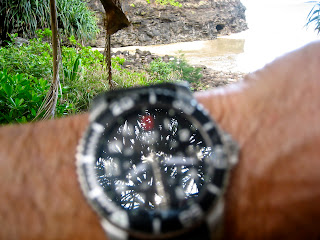 This is as far as 99% of the tourists would go. From here, the trail gets considerably more technical and prone to turning to a muddy trough after each rain shower. I was very lucky, few drops here and there, but weather stayed mostly dry. So I jogged wherever the surface and my lungs allowed and tried to use my brain to think about three steps ahead on wet rocky sections. Traction of my shoes was near perfect on all but the slickest rocks, but after a while, I got used to slight sliding of soles on rocks upon each step. I arrived at the camp at mile 6 in Hanakoa Valley after another two hours, soaked with sweat but with dry feet. Here, instead of continuing for another mile or two, I decided to search for a side trail leading to Hanakoa Falls. After two unsuccessful attempts of hiking up overgrown stream beds to impenetrable jungle, and asking passing hikers (blank stares...), I finally identified the trail using a trail map picture I took at the start. 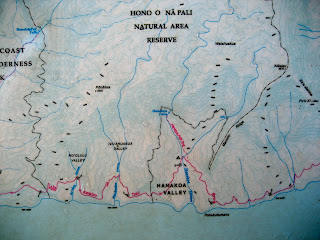 This half mile trail followed a stream pretty much all the way to kind of an anemic waterfall (9/5 update: searching the web for Hanakoa Falls pictures I  found that the waterfall I reached indeed was not the 1000 ft high Hanakoa, so it means I got lost somewhere along the way): 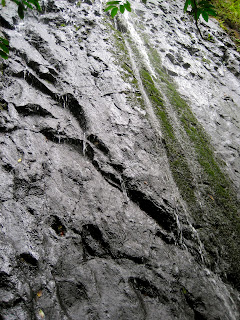 The search for trails and waterfall hike took me an hour and my shoes and socks were completely soaked by now. So for crossing the Hanakoa stream on the way back, I put the neoprene socks on. Good idea, as I got going, it started to pour and heavy rain came in sheets. I took this lo-res video which may look like walking among your grandma's flower beds in a sprinkle...

Back at Hanakopiai beach, the weather improved, so after crossing the stream knee deep, I pushed myself to a trot, scrambled up steep switchbacks and actually ran on rocky down slopes back to Ke'e beach. 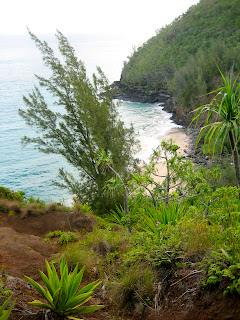 I was back at the trail head at 1:15, after 5 hours and 45 minutes and about 7 miles. So it looks like this way of traveling along the KT is the way to go, for an overnight hike I would need a hammock or a light bivy and little more food. Good grippy sole on your shoes is the most important factor, in my opinion, and the neoprene socks worked wonderfully, saving one the need of dangerous scrambling over slick rocks while crossing streams, or changing into tabis or water sandals.

The silver lining on this trip for Marketa was that we were able to convince the race officials to roll her marathon entry to 2013! That means, we will be back, and if all goes as planned... check back here in a year. The Na Pali cliffs will certainly still be there. 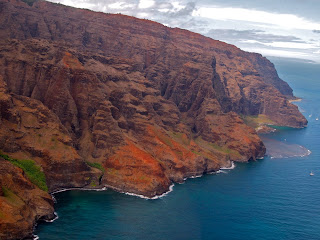