For about the second week in a row, if you looked at Seattle's weather forecast on your phone, you would see a column of seven suns. Sunny, sunny, sunny... well, not quite. We do have an unusual stretch of dry weather here, but the high pressure causes inversion and low clouds and fog shroud the city and low elevation areas until around 2PM when there may be a short sun break, then the fog rolls in again by 7PM. I guess that's how they create the Seattle weather statistics - don't believe any of it, weather in this town really, really sucks nine months of a year.
A Meetup call came late Friday night to ride trails on ridges around Lake Wenatchee and I happily set my alarm clock for 6AM and drove 2.5 hours to those trails, I liked them very much back in July. It became sunny just east of Skykomish, as soon as the road started to climb towards Steven's Pass. The fall colors were unbelievable all around, especially on the eastern slopes of the hills. As I drove downhill, the temperature dropped as well and stabilized at cool 34F at the meeting point at Midway Village. Shortly afterwards, the ride organizer as well as two more couples showed up for a crowd of six. From this outpost of civilization (in the winter they primarily serve as a fuel and food station for snowmobilers, apparently there are about 200 miles of snow mobile trails in the vicinity), we drove some more on zero traffic paved road, then a mile on a dirt road to the trailhead. Here, we loaded six bikes and six people in the smallest of the vehicles - a pickup truck- and shuttled 7 miles up a fire road for a singletrack descent. I was a bit bummed first since I like to climb, and sitting in a truck bed for 20 minutes was not the best warm up for the ride, but we had ambitious plans for the day. We did climb the upper part of the fire road, met three horse riders and hunters carrying rifles, and stopped for a friendly chat with each group. I guess that's what friendly trail sharing means, at least here in WA. 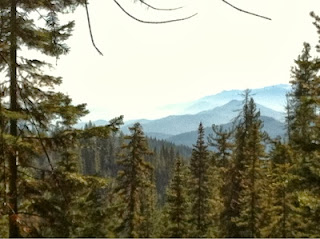 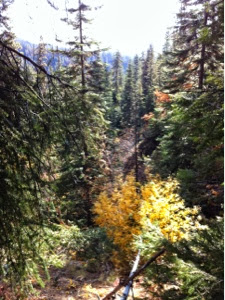 The singletrack was frozen solid and covered by multiple patches of snow and ice, which made the first part of the downhill interesting, since the trail here is steep, narrow and cut into a steep hillside. At each of the switchbacks, it feels like you could skip a few taking the straight line down. The Chikamin Creek trail soon entered the forest where tree roots crossed the trail every 10-20 meters making a series of 1 foot drops that were fun to launch off. This trail was not all downhill, there are numerous short punchy uphills as well as a good length of sustained granny gear climbing from the creek. The last section, which was so dusty in the summer (pumice) was absolutely great - no brake berms, sticky sandy soil and enough rocks and roots to keep it exciting.
Back at the cars, it took all of us just about an hour to solve the next logistic riddle: how to get those who wanted to ride Minnow trail to the top, how not to accumulate more cars on top of the hill than drivers who could drive them down and how to make sure all car keys were at identifiable locations once everybody descended the hill the second time. Isn't there an app for this? The second lap was just us boys and I had to push myself pretty hard to keep the other three riders in sight. Minnow ridge trail was even more roller-coaster-y than Chikamin, requiring quick changes in riding style - pump the moto dips on level sections, pedal hard downhill to get enough momentum, then shift all the way down for either granny gear suffering next 50 meters, or standing up mashing the big ring, if you had anything left in your legs. This trail was also a lot drier and smoother, testing our courage to lean the bikes into the turns until the tires started to break loose. Here is the track, including the second car shuttle up:

A long day out there would have ended very successfully at a local pizza and beer joint, if it wasn't for a wreck that closed Highway 2 between Steven's and Index, forcing me to take a long detour on the only other road across the mountains to I-90. About six hours out in the woods, two and half hours of intense riding and a total of 5.5 hrs behind a wheel. A real "endurance" day for me, but the bright yellow fall colors, misty mountains on the horizon and the sound of tires and suspension thumping down the trail keep coming back in my mind a day later.
Posted by Unknown at 10:11 PM