I counted how many times we have driven between the Bay Area and Seattle. Since my first drive to Vancouver for the BCBR in 2011, the number of trips is about seven. One can either take the more or less boring I-5 route, or drive along the coast on Highway 101, even better, on Hwy 1 in Northern California. In July 2011, we drove south along the Oregon coast and saw a few beautiful places, I just remember being too tired after the week of BC racing to fully enjoy it. In December 2012, we were forced by a snow storm to take the coastal route, but were in a hurry to reach Seattle. So now, on my way home, I thought I could explore some sandy beaches for a bit of fat biking.

My first stop was Astoria, OR and then Fort Stevens SP. The beach here is vast, the coast was being whipped by strong winds and rain showers, so I lost the resolve to ride and went picnicking instead.

For the rest of the day, I drove through a violent spring rain storm, which impacted most of Northern Oregon, second guessing my decision to carry two bikes on the roof rack.
It still rained in Springfield, OR on Wednesday morning, but as soon as I started driving west towards the coast on the Umpqua Highway (Rt 38), the clouds broke and early morning sun shone onto what must be some of the most bucolic valleys in the USA. Spring in Oregon is beautiful, green meadows, deep forests, every tree that can bloom blooming, horses, sheep and no cars on the road.

My next destination was the Oregon Sand Dunes NRA just south of Reedsport. The beach looked great from the Umpqua River lighthouse. 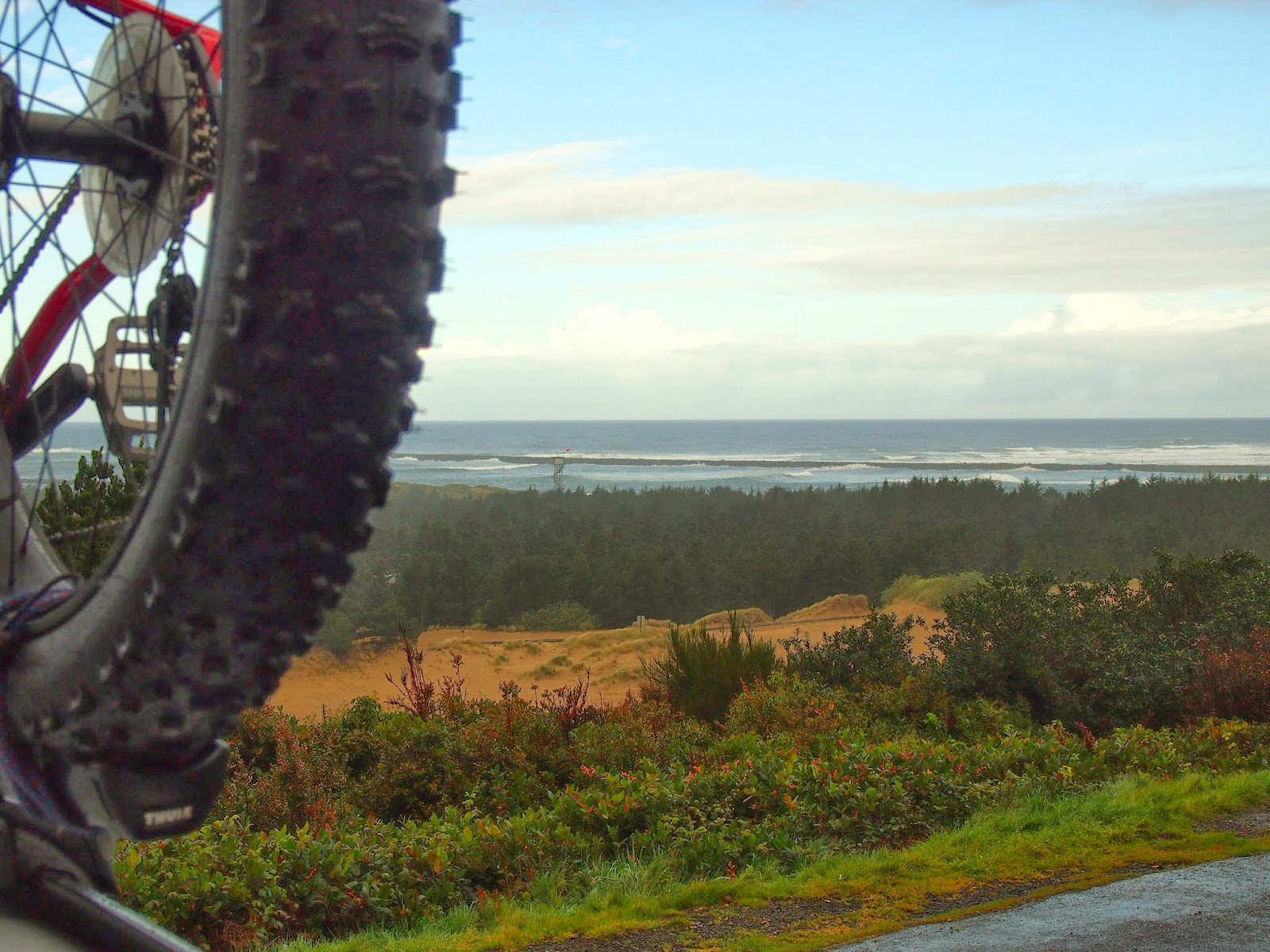 From the fat bike saddle, it looked and felt even better. There are areas dedicated to ATV use (seen from the picture above), and then there is the beach with a band of smaller, but very diverse sand dunes just inland. There is no motorized vehicle use permitted, but I have always argued that bicycles cannot be classified as motorized, saw no signs forbidding bikes here, so I rode. 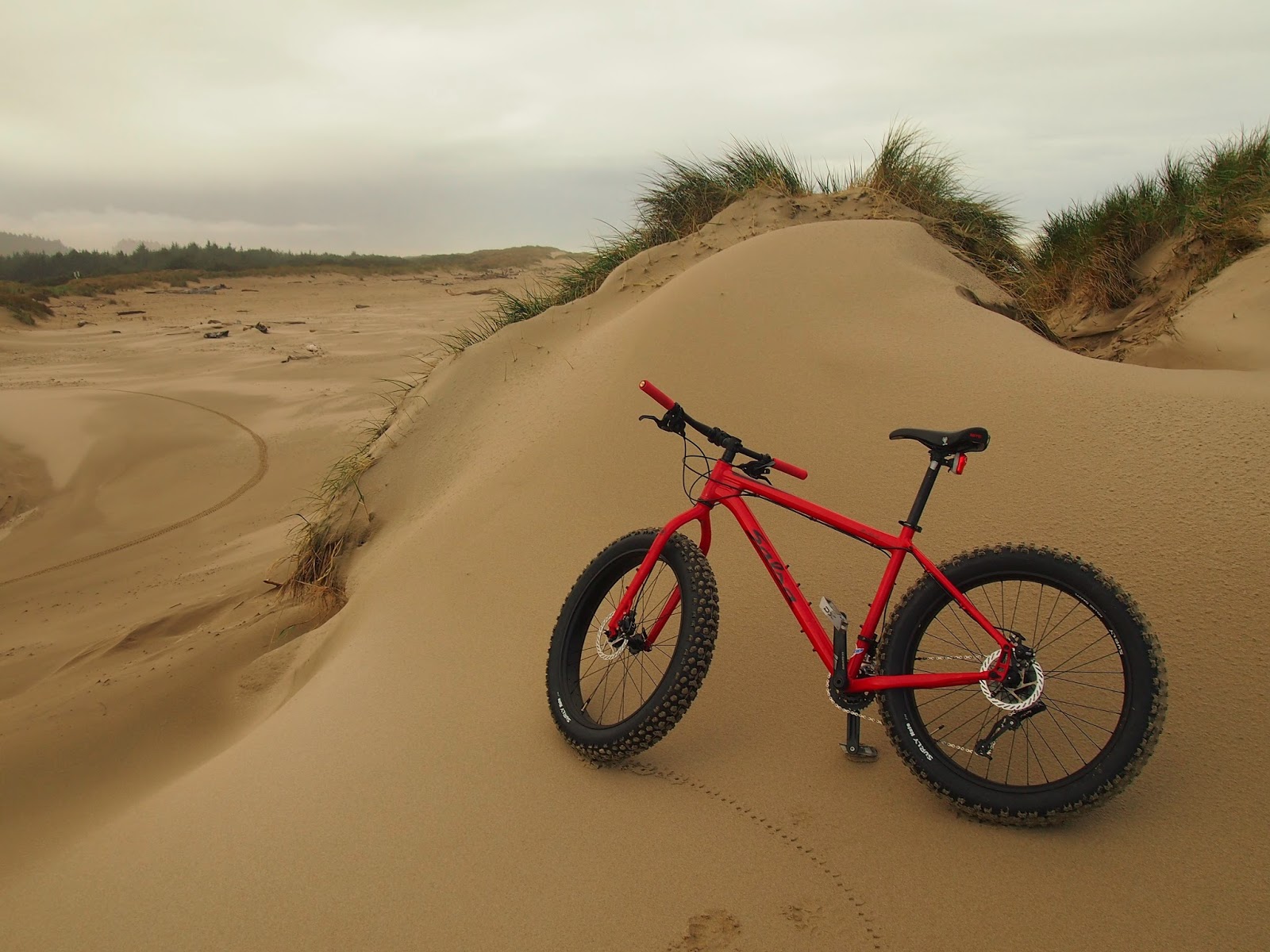 You can either follow the water on a densely packed wet sand, or explore the adjacent maze of dunes. I was very surprised how compact the sand was, perhaps the rain had something to do with it. I could climb steep dunes, not seeing what was on the back side - either roll a smooth dip, roll a grassy drop off, or get off the bike. 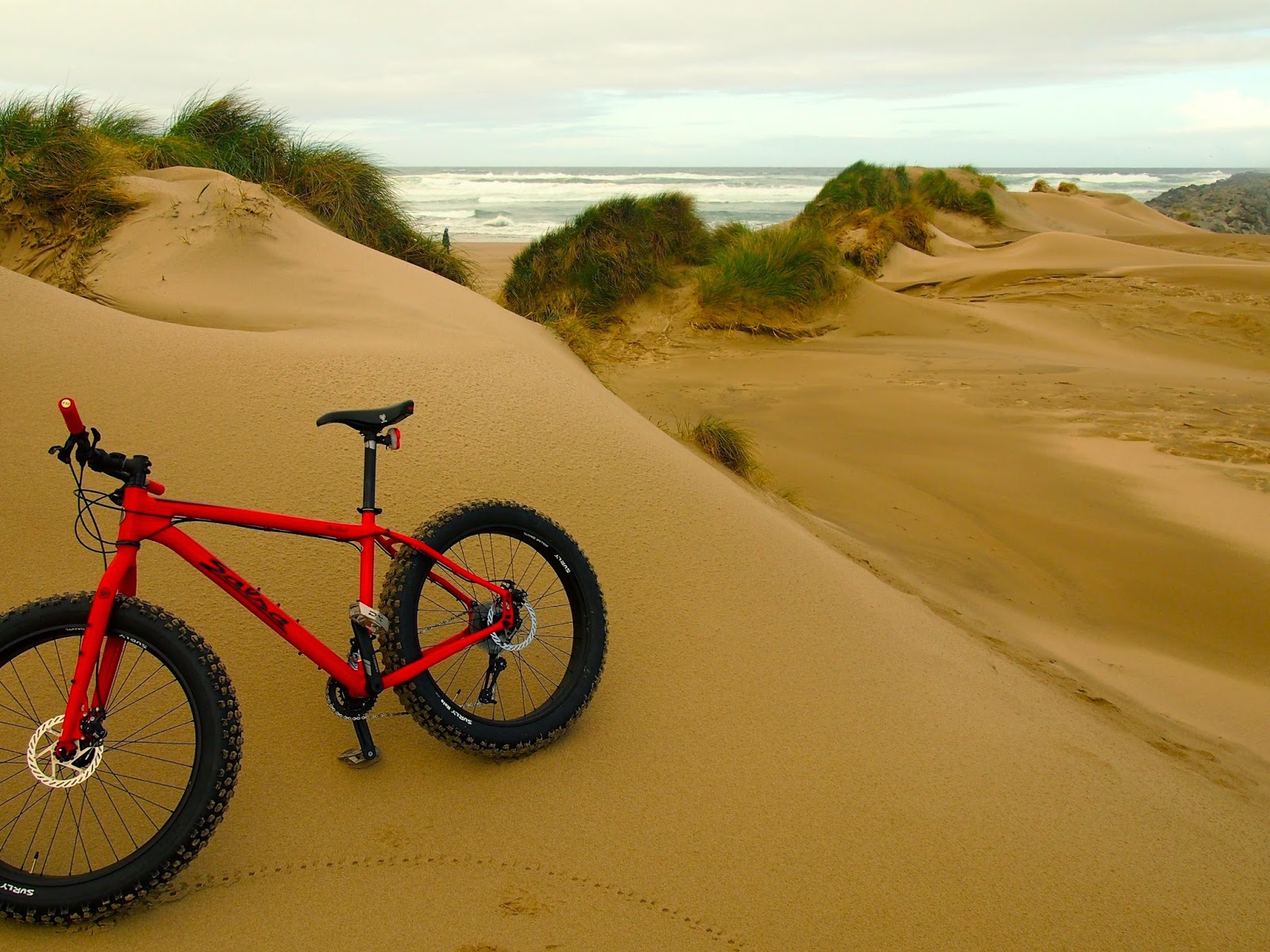 I rode only for about an hour and half, but jeez, this was too much fun! Somewhat easier in terms of power required compared to riding on snow, softer landings, and the terrain variety was amazing. 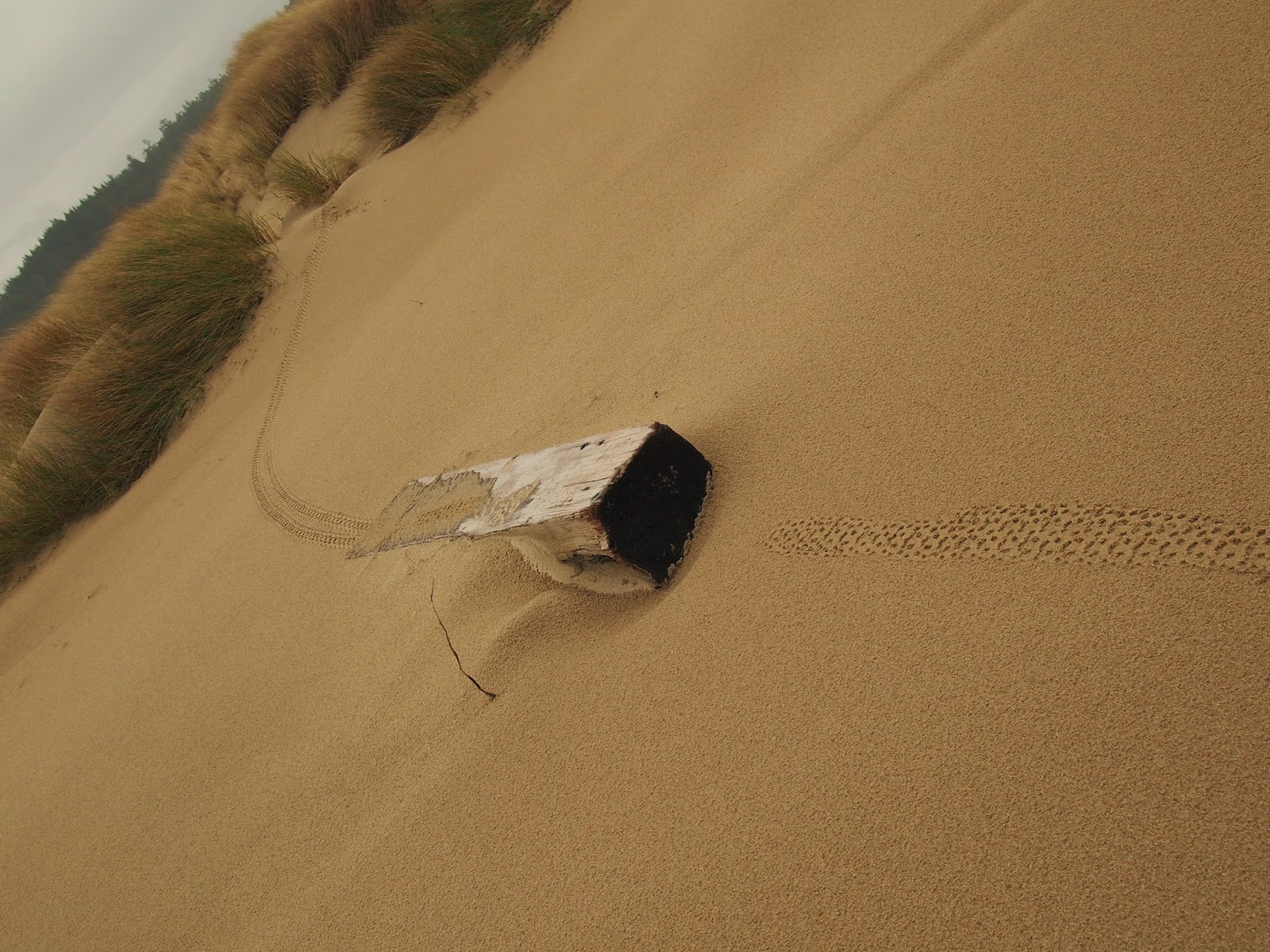 Post-ride fish and chips at Unger's Bay tasted like sushi to me. So here is how I see my next Oregon biking trip: first, mountain bike the McKenzie River trail east of Sisters, something I have been planning to do for years. Then drive to Drain and do a road ride on Highway 38 to Reedsport. At Unger's Bay, unload the fatty and spend a day (or two) blasting the sand. Who's in? 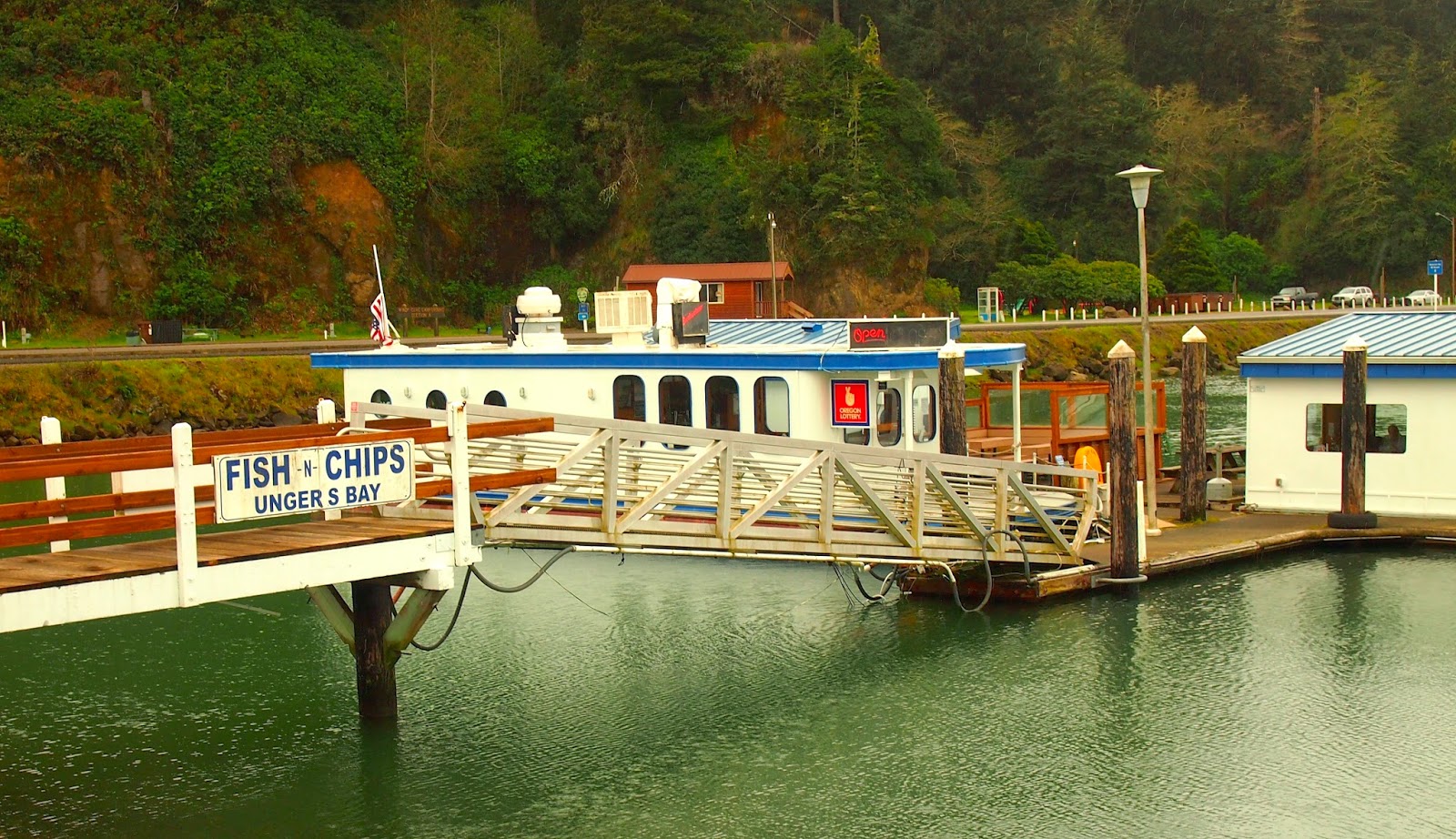 On this particular trip, there were just a few more quick stops to enjoy the views along the coast during the sixteen-hour drive home. The pull of California was just too strong to make this a biking vacation. 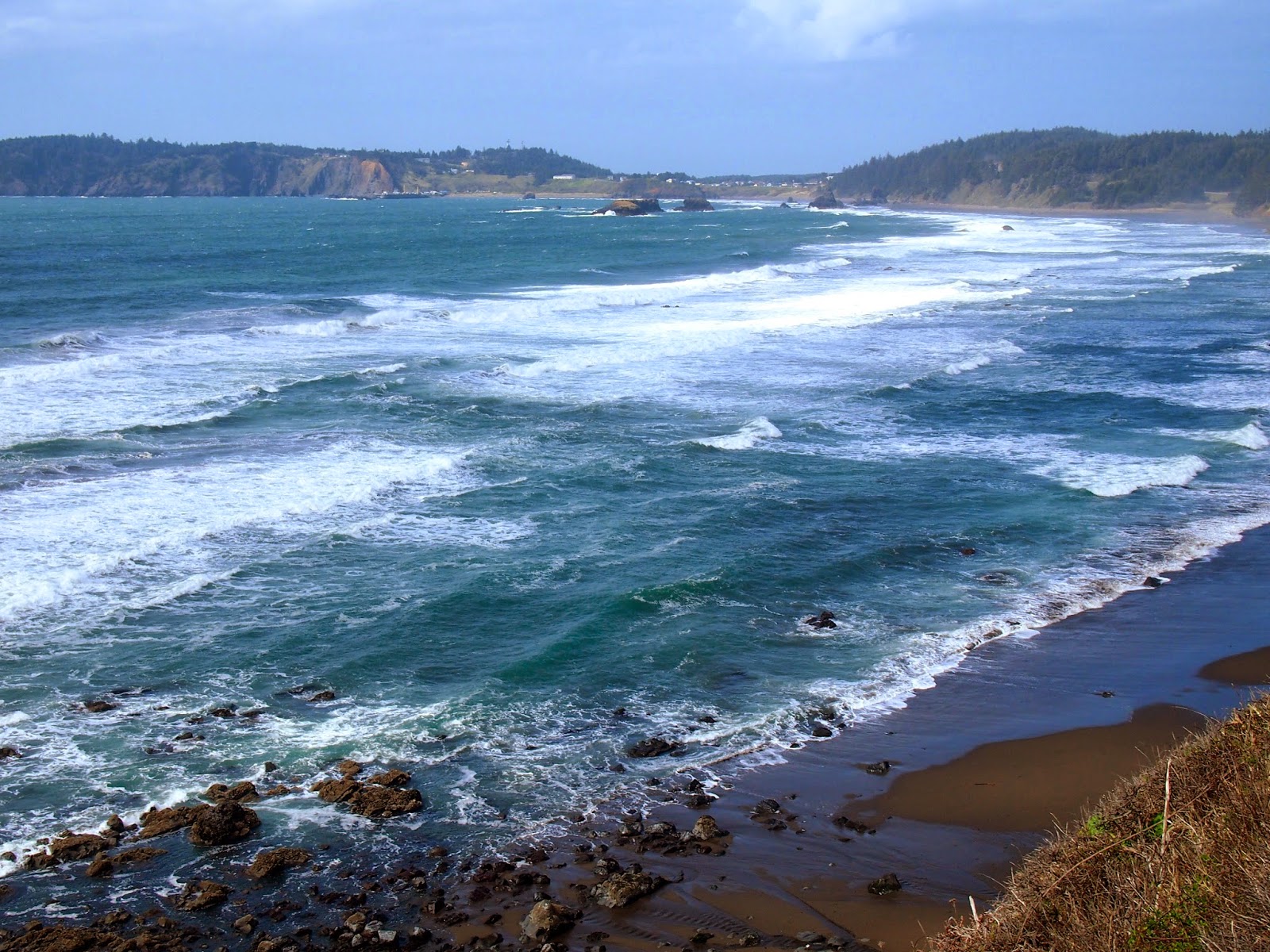