In the past, which now seems like a really distant past, I often enjoyed riding my road bike fast. Fast as on letting off the brakes on some of our winding, steep roads. Highway 9, 84, Page Mill Road (although I preferred to climb here), Kings Mountain Road, Panoramic Highway etc etc., there is no shortage of descents in the Bay Area where Strava downhill speed records are often contested. It not only seems foolish to me today, it seems downright dangerous (I'm getting old). When I remember riding down Tioga Pass on the last day of the 2012 Sierra Tour on my old aluminum Giant bike and seeing 54mph on the Garmin display, I shiver.
So, my desire to ride fast is gone, but I still like to believe that I could ride long distances if I wanted to. You know, slow, in a touring mode, on a bike equipped with racks and panniers and low gears. Since my new mountain bike is still undergoing the last stages of a custom build, I planned to ride on roads. Some of the most scenic backroads in the East Bay are along the Mt. Hamilton century course. When I suggested this ride to my biking buddies, everyone came back with some excuses except Jill, who decided that a 100 mile ride was the right way to recover after a 100 mile run. She joined me for this ride on her carbon S-Works road bike, while I rode my Ti hardtail in a test touring setup, identical to this one.
I am not going to describe the beauty of canyons along Mines Road,  Mt. Hamilton or Calaveras Road in the spring, since I did not take any photos. I was focused on pedaling, trying to maintain a decent speed on flats, ignore the pain in my legs and resisting the urge to stand up and push hard in order not to be left too far behind.
I was also testing couple of items on my bike to see if they would be suitable for longer, let's say three day touring. The rack and panniers were tried before, and again proved to be sturdy, stable and reliable, albeit on the heavy side. My new Serfas rechargeable tail light, very bright, with strip LED, did not last the whole day in a low intensity blinking mode, so it is not good for long or multiple days with limited charging options. I also installed a new Topeak iPhone case on the handlebars, with the intent of using my phone instead a paper map, thanks to the Gaia GPS app. 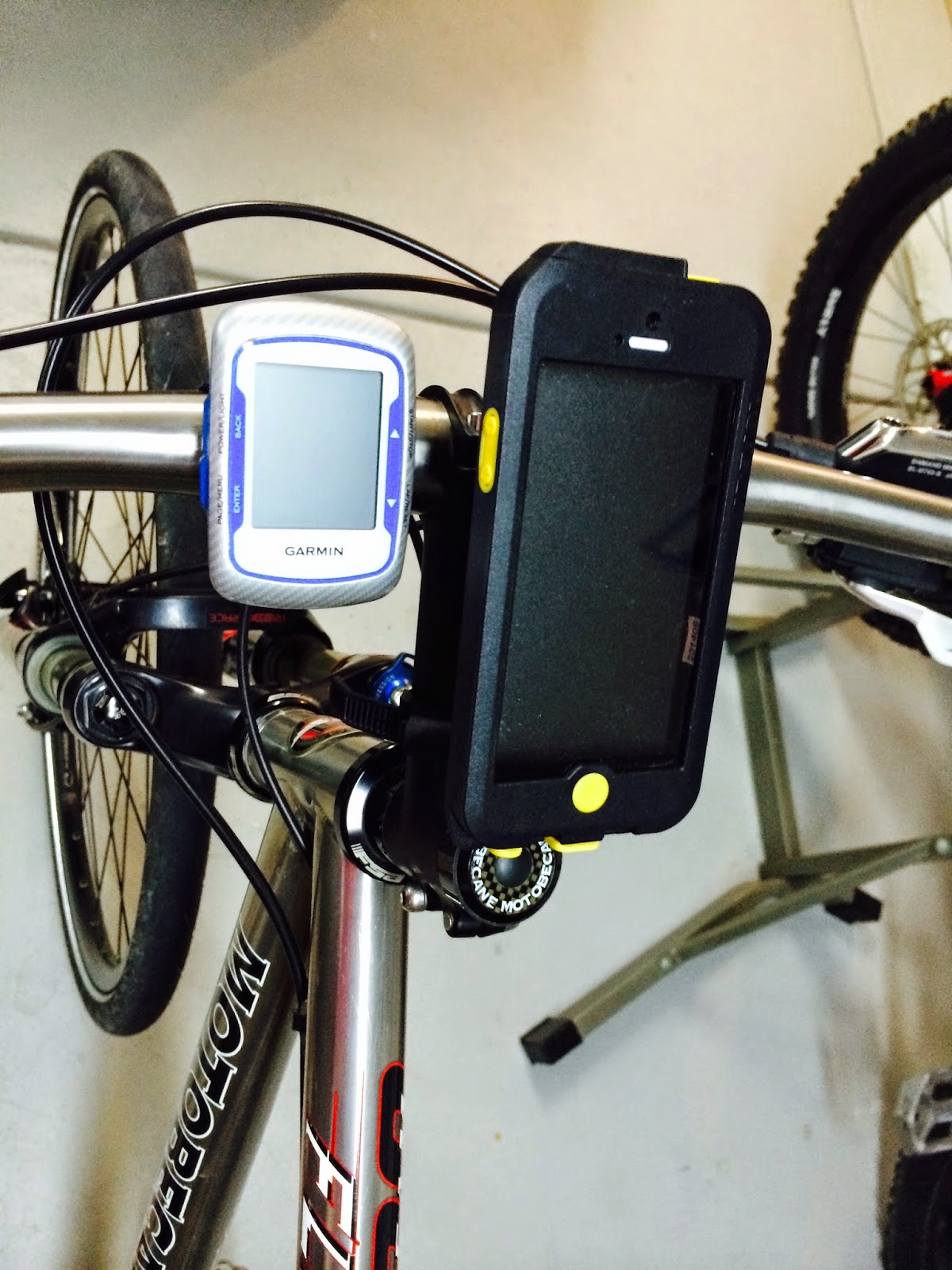 This is a sturdy, waterproof case which has pretty clever mounts for both the stem and the steerer tube cap. The iPhone 5 fits inside just perfect, with no wiggle. The screen is less sensitive to touch and does not work with full finger gloves - the iPhone screen does, although just barely. 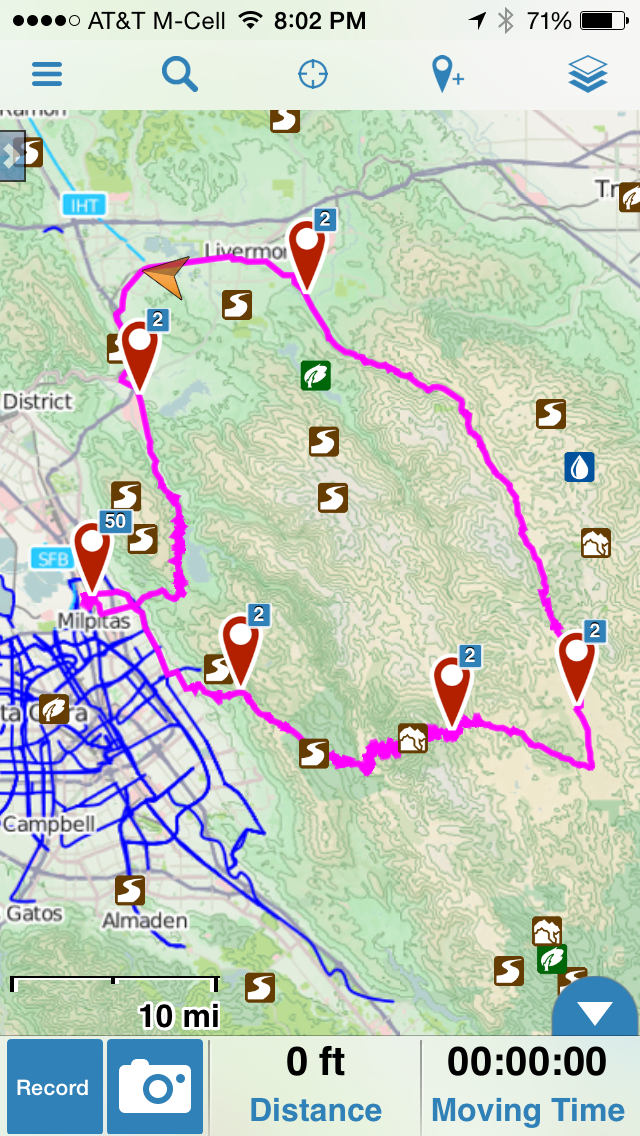 I chose Gaia GPS after reading reviews online, mainly for its offline mode and the ability to download OSM maps of any part of the world for free, then saving the map areas in the phone memory for use outside of cellular signal. I think this feature will be very useful for touring in Europe, where I always turn cellular data off and use public WiFi. The question remained if the phone battery would last for a day just powering the screen, GPS and a compass. The screen shot above shows a gpx track of the route, found and downloaded from an online activity tracker, displayed on the previously saved offline map. I did not use Gaia for route tracking, I had my Garmin Edge 500 for that. I liked the continuous scroll of the map while riding, the only issue was after zooming in, the map orientation defaults back to static mode and you have to hit the small cross hairs symbol twice to orient it into the direction of moving and start scrolling.
I set the app into the OFFLINE mode, but noticed that my phone stayed connected to 4G or LTE signals whenever available, so obviously the cell antenna was not turned off. After close to nine hours of use, I got a low battery warning few miles from home, but this was exactly what I tried to avoid - depleting phone battery if you have just one device for navigation as well as communication is not acceptable on solo tours in remote areas. I will need to read the user manual more.

All together, my equipment worked, I learned about its weaknesses and my tired legs spun the pedals all the way back to the starting point, for a total of 104.3 miles. During the whole ride, I felt really slow and wondered if it was the bike that was too heavy, or me not riding such a distance for almost two years. After uploading the Garmin data, I could compare my times on 100+ mile rides that I recorded in recent years: 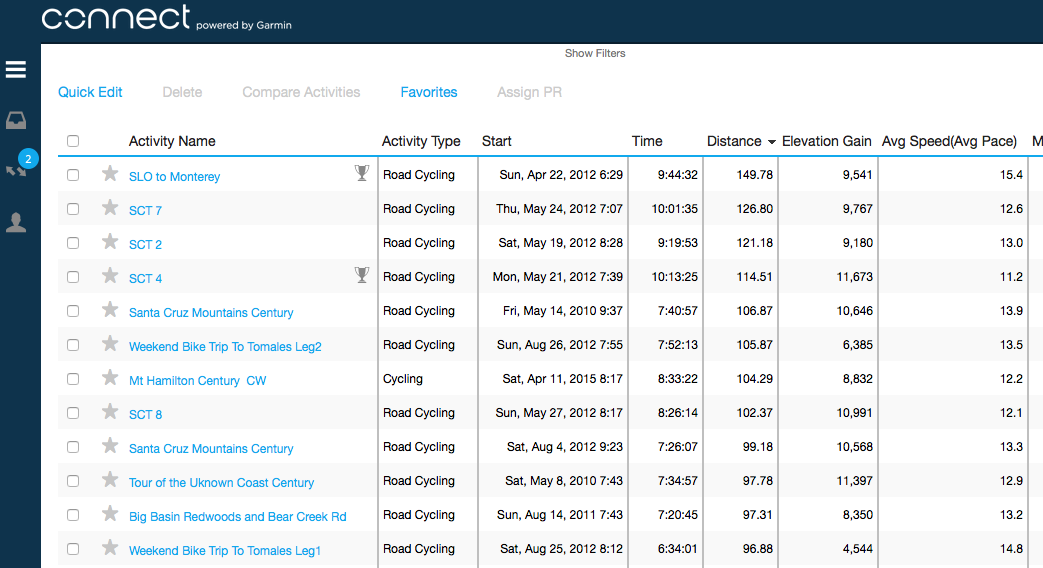 As you see, this was my slowest ride in the 100-107 mile range and the third slowest average speed. With 8800 ft of climbing, this century is a tough ride and considering the time gap between my last years of being in shape and today, it is not too bad. If I can keep collecting data points for the graph showing correlation between my age and speed on century rides for the next ten or fifteen years, I won't mind proving that the correlation indeed exists.