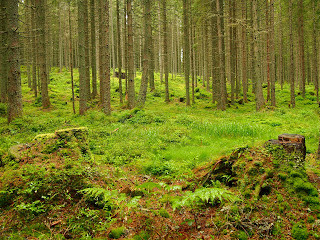 The forests of Šumava mountain range reminded me of British Columbia, but a scaled down, gentler version of those rain forests. Šumava is known for harsh weather and it rained on the first day of our explorations. Majority of this region used to be inaccessible to tourism, due to a broad band of well protected no man's land along the border with Germany. Today, mountain towns are centers of tourist activity, hiking trails cris-cross the hills and numerous bike paths exist to provide safe bicycle travel for families and bike tourists. All with excellent trail signage. Special category are trails following the "shipping canals", as the Šumava web site calls them. I would translate it as "flume" since these canals were built to transport logs, not ships. An intricate system of water flumes was built by Joseph Rosenauer in 1791 and some of the flumes were used as recently as 1961. 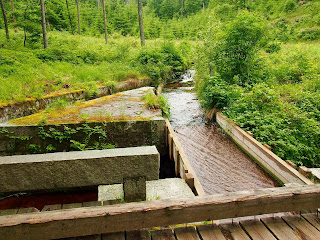 The flumes are built impeccably - walled off by stones, with numerous merges and even a 2-level water crossing. The system was used to transport timber from the mountains to both Danube and Vltava rivers, supplying construction wood for both Prague, Vienna and many towns along the way. 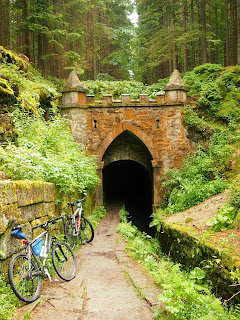 A part of the system is also a 420m long tunnel under Jeleni Hora, with nicely restored portals. The bike trails that follow these flumes are wide double tracks with fine crushed gravel surface, and since the grade of the canals was just a few % to allow for smooth water flow, these bike ways are easy to pedal on. 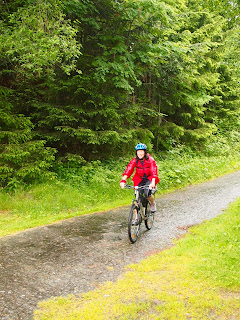 During our first day, we chose to detour to Plešivé jezero (lake), a man made reservoir supplying the flume system with water. This lake was built on a slope of a high mountain, so it took a good amount of climbing to reach it. It poured heavily on the way up, making us worry about the steep descent on the slippery and sometimes sandy path. But by the time we finished our lunch of sausage and bread at a rain shelter, the weather improved and we could let off the brakes for a long descent back to our cars. 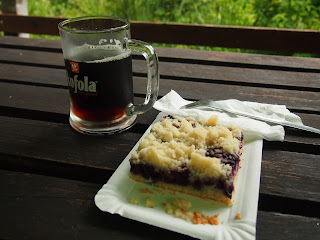 This was a relatively easy, 23 mile ride with only 1500 ft vertical, but nevertheless deserved a reward in the form of Kofola and blueberry cobbler. 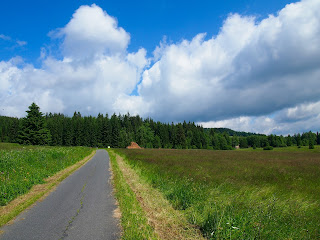 The weather improved considerably overnight and while some of my family went for sightseeing around some cultural and architectural places of interest, I decided for a quick solo ride from the rental house, before driving back to Bělčice in the afternoon. 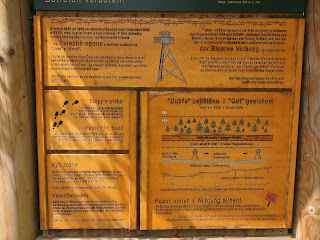 I rode through the former Iron Curtain area, following old military service roads that were built for rapid deployment of troops to catch those desperate souls trying to escape our socialist paradise across this physical barrier. 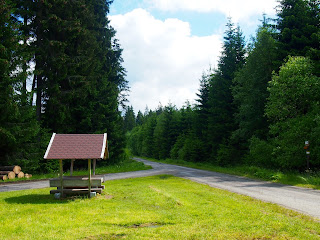 It is hard to believe today that these roads used to divide the world into West and East. On "our" side, there were watch towers, strips of smooth sand to see footprints, electric and barbed wires, and also land mines. The mines were eventually removed by the communists after many border patrol soldiers blew themselves up.
One good thing resulted from this nonsense: very well preserved nature and miles of excellent bike paths.

I rode over Knížecí Pláně, a high plateau with huge mountain meadows and tall solitary spruces, before starting a long and steep climb over an unnamed mountain below which the Vltava river source is. Vltava (Moldau) is called the mother of Czech rivers and it becomes Labe (Elbe) at the confluence in northern Bohemia, before traversing Germany on its way to North Sea. 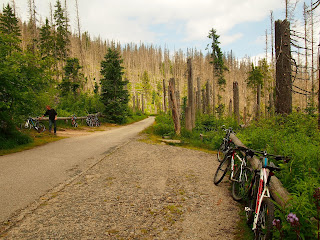 Forests around the Vltava source have been badly damaged by bark beetles, but it is a popular bike route from Kvilda, a small town with many good restaurants. Here I managed to get lunch of goulash and dumplings, washed down by some good beer, before turning around and finishing my Sunday 50km loop.
This trip left many places still unexplored, as well as enough room for planning a longer bike tour across the whole Šumava mountain range. It is amazing that in the center of densely populated Europe, there are still places largely untouched by civilization, but with enough infrastructure to provide for safe and comfortable bike travel.  Renting good quality bikes is also easy and cheap ($100 for an 8-day Specialized 29er bike rental). I can easily see myself bike touring here after I won't be able to ride at Tahoe anymore.