When we first discussed the idea of spending couple of weeks vacationing in Bělčice, a small town in the center of Southern Bohemia, which is a place of significant ties for my wife and her family, I quickly decided that staying at one place with my wife's relatives was not going to satisfy my own selfish needs for an active vacation. Since January, I have spent numerous hours charting routes on cykloatlasonline.cz and importing them into Gaia GPS to create a five day trip across the Czech Republic, totaling about 500km. As time went on, I realized that this plan was stupid. Coming for vacation to my home country and riding for a week alone through regions I knew, without having enough time for my family and off the bike cultural experiences, would be a waste of time. I have a long list of other countries I would like to bike tour one day. The plans thus changed for a week of rides around the Blatna region and a three-day bike tour through Sumava mountains. This part will describe my experiences about cycling backroads around Bělčice and Blatna.


South Bohemia is a region of the Czech Republic that is rich with history, famous for its numerous fish ponds, medieval castles and beer. The northern part is farm lands with rolling hills, small villages with the typical baroque architecture and hundreds of ponds of all sizes. A hundred kilometers to the south lie the Sumava mountains which create a historical border with Germany. This part of the country is known for rainy weather, deep forests logged for timber, a strong German influence (and history of clashes of the Czech and German cultures). This is also the former Iron Curtain border region, which used to be fenced off with barbed and electric wire, riddled with land mines and people evacuated inland with their small village homes left empty to slowly disappear in weeds. 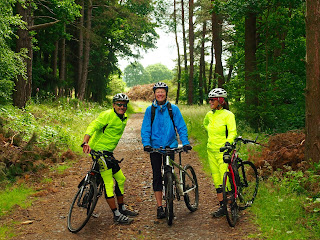 We were lucky to be hosted by Marketa's cousin and his family of bicycle enthusiasts, who have ridden all small roads, paths and forest trails in the area. Navigating the maze of roads and trails was not an issue in their company. I came prepared with Open Street maps preloaded in Gaia app and my phone on the handlebars in a waterproof case. These cycling specific maps are really good - not only they contain the complete and up to date information on the vast network of marked bicycle routes, but I could see pretty much every old fire road and paths through fields and forests. Bicycling infrastructure in Czech republic is amazing: there are numerous routes all marked with route numbers, distances and points of interest. I think that bicycle routes are marked better than car roads! 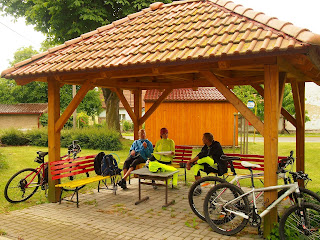 The first couple of days of riding were marked by chilly weather with some rain showers but no heavy rains. This being mid week, car traffic was almost non existent, although one had to be careful - you could encounter a tractor or an old Skoda car at places where you would not expect motorized vehicles. Another great thing about Czech cycling is that all passable routes are accessible to bikes, including all superbly marked hiking routes. There seems to be no user conflicts, at least outside national parks, where the No bikes signs exist. Major roads are not very bicycle friendly, though. Most roads we rode on were newly repaved using euro funds, but since these roads have been in place for centuries and are typically lined by rows of old trees, they are narrow and have no shoulders. Czech drivers practice the sport of speeding and passing each other for no apparent reason at blind corners, with little regard for bicyclists. 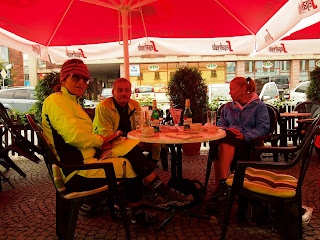 You can't really get lost here, I joked that you see from pub to pub easily. Every village has a restaurant or a small grocery store, with regional centers such as Blatna, having beautifuly restored old town centers with many coffee and pastry shops, restaurants and hotels. That means you don't have to worry about carrying food or water. Actually, carrying water bottles on bikes is not common, Czech cyclists firmly believe that beer is the best electrolyte drink. Similarly, power bars, gels and other forms of gas station style junk food were replaced with fruit cakes, pastries, fresh breads and sandwiches during our numerous stops. 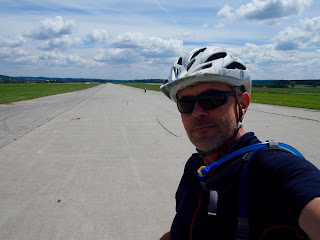 Every day, we set out after a good breakfast, with just a vague idea of where we would be riding that day. Our bike tour guides knew roughly how far and in which direction we would cycle, otherwise I could concentrate on soaking in the beautiful landscape, picturesque villages, and many details of the surroundings that reminded me so strongly about all my years growing up in this country. We would race up climbs, take some descents fast, then just ride alongside and chat. Each day brought us to some interesting places: an old and abandoned military runway (built during the communist regime as a secret emergency landing strip after our air force bases would be destroyed in a nuclear attack), today used for model plane flying, testing maximum speeds of motorcycles and such... 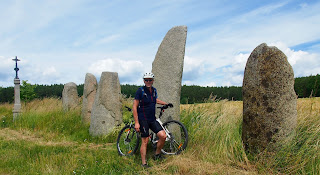 ...or a cluster of menhirs on a field's edge, these could be real remnants of a megalithic culture or someone's joke, who knows? Our bike trips were not too long and the long daylight hours (at 50th parallel, Czechs enjoy about 18 hours of daylight in June) left us enough time to rest and socialize after coming back to our base. 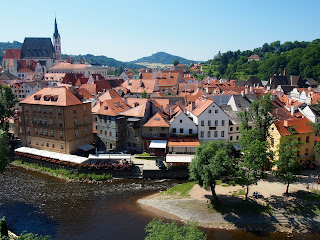 We rode about 100 miles in three day trips which made me feel like I knew this part of my country for a long time. There really was no better way to get to know this place than criss-crossing it on a bike in this worry-free mode. At the same time, I was getting familiar with the region and spending enough hours in the saddle to be ready for my next trip: transporting myself and some basic gear for a three day exploration of Sumava.