How Big, How Blue, How Beautiful

(With apologies to both Florence and The Machine) 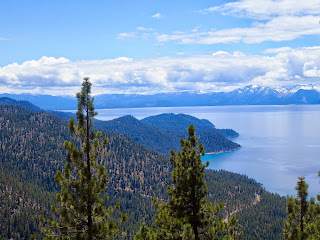 When the Tahoe weather forecast calls for "pretty much steady rain" over the holiday weekend, what do most coastal Californians do? They don't go there to mountain bike, I hoped. Living for awhile in Seattle got that attitude out of my system, perhaps just temporarily, I admit.
Motivated by a glowing review in the May issue of Bike magazine and the fact that a new OTE bike shop was about to open on Saturday, I really wanted to see what the trail system south of Nevada border had to offer.
The bike shop was buzzing with activity on Saturday morning, with people buzzed on free coffee, brand new bikes on display, grills getting fired up for an afternoon barbecue and shuttle vans ready. All that under overcast grey skies and drizzle that threatened to turn into steady rain. 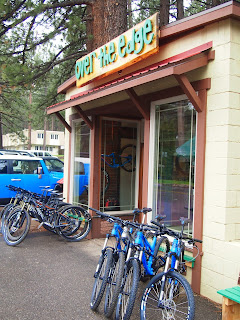 I biked up the street to explore the trailhead and by the time I made it back to the shop, it was pouring rain and I was soaked. I spoke with the shop owner, Sam, who gave me detailed directions, described trails I was planning on riding and invited me to their opening party. I returned to Powerline trail and rode south towards connectors to some challenging trails at high elevation. I immediately noticed two things: trail signage and the build quality of the trail. I won't repeat here the praise Bike article gave to the area and it's trail builders, needless to say that if these trails impressed Scott Nicol, I was delighted. 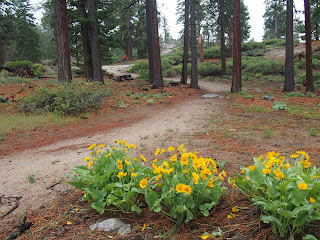 As I started the "unpleasant" climb on High Meadow fire road, the signs of altitude suffering came up instantly: difficulty to keep the heart rate at reasonable levels, sweating, dry mouth and not sucking enough air into lungs. When I reached the intersection with Star Lake trail at 7,800 ft, it looked like this: poor visibility and drizzle: 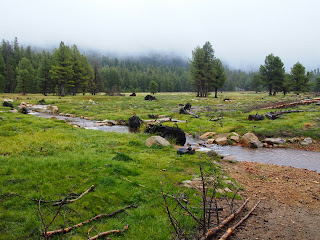 But the meadow was beautiful, even in this weather. Cold Creek trail started as a narrow ribbon of smooth, curvy singletrack, but soon I came upon an area that looked like someone has just unloaded a truck full of appliance-sized boulders. There was a rideable line somewhere, about 10 cm wide and the only line one could attempt if accompanied by a team of paramedics. Me being here alone, not seeing a soul during the last hour and ten miles from the nearest emergency room, I walked this section, but now I think it was probably safer to ride than to scramble down rock faces wearing clipless shoes.
The rain stopped and the top part of the descent was still very rocky and technical, but gradually the trail turned into smooth berms and followed the raging creek downhill. I returned back to the hotel after 15 miles of superb riding for lunch, as soon as the skies opened up and rivers of muddy water flowed down the street.
By the time I finished the last night's leftover pizza, it was sunny and warming up rapidly. My afternoon ride was across the state line and up Van Sickle trail. 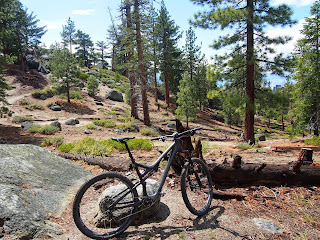 This is a 5.8 mile trail that connects Van Sickle state park with the Tahoe Rim trail. It starts smooth and up over large round boulders, climbing through a burn area. Five minute ride and I was above the casinos and saw only a few bikers and hikers. The trail got progressively more technical, requiring a constant lifting of the front wheel over step-ups. Very tiresome at this altitude. 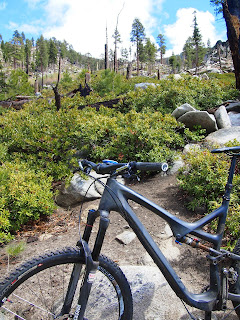 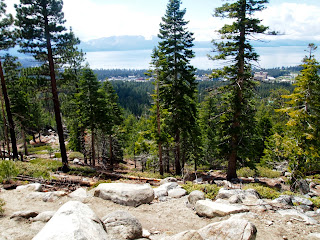 I continued the climb for about 4 miles to roughly 7,300 ft and then decided to return. There were black storm clouds rolling south over the Lake and I was getting ready tired. The descent required dropping the seat and going slow, in control, over the rocks. I practiced dropping the front wheel over consecutive steps, trying not to get distracted with the fantastic views all around me.

On Saturday, Marketa and I took advantage of North Tahoe mountain biking infrastructure. We shuttled with Flume Trail Bikes from Tunnel Creek Cafe at Incline village to Spooner Lake, this time sans bikes but ready for some trail running. 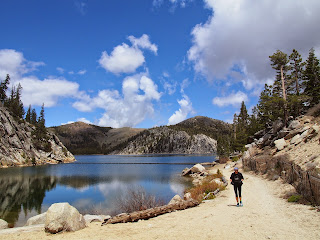 We followed an uphill fire road for the first 4.5 miles, first being passed by many mountain bikers on this very popular trail segment, and by the time we reached Marlette lake, the crowds had spread out and we had all this beauty for ourselves. Even on a second day at altitude, we still did not feel acclimatized enough. The steep climb up Marlette was painful, but then we got rewarded by a great singletrack through the next section, where bikers must descend on a rutted fire road. 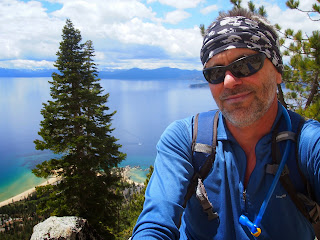 The Flume trail - what should I say? I rode it several times over the years, but running here was a new experience. There simply was more time to enjoy the scenery and the views of Lake Tahoe thousand feet below. 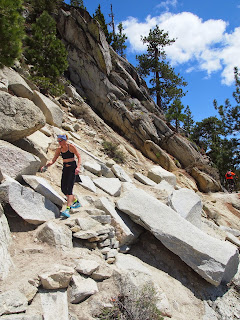 Towards the northern end of Flume Trail, views of Mt Rose opened up. The summit was covered with fresh snow and biking on the TRT from there will resume in June, unless there are more snow storms. 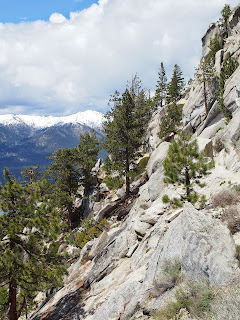 The final three miles back down to the cafe were marked with more awesome views and the afternoon thunderstorms stayed far to the west. 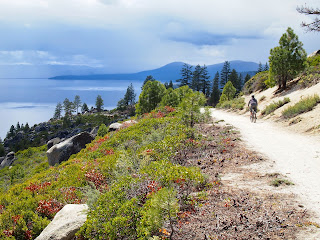 On Monday, Marketa had to return to her client duties thus freeing me for more trail explorations. I drove to Oneidas Street and to a forest park, where multiple newly built trails converge in a hub of outdoors activity. You can read detailed ride descriptions on the TAMBA web site, I knew I did not have enough time and leg power to ride them all. The trails are accessed off Fountain Place Road, which was steep enough to keep me warm on this 4-mile climb on a foggy early morning. 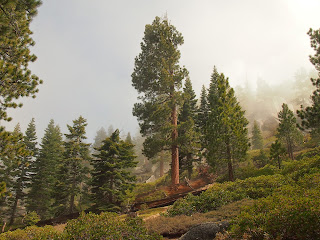 As the pavement ended, I looked for Armstrong trail, but almost ran into a bear instead. I back tracked onto a trail while the animal observed me for a while and then went on eating grasses for breakfast. This encounter gave me such an adrenaline rush that I rode straight through a big No Trespassing sign and followed an abandoned fire road until I realized I was on the wrong side of a creek. After returning back, I found the narrow trail entrance at the exact spot previously occupied by the bear.
The Armstrong trail was pure bliss. Climbing was not too difficult, giving me enough time to study many technical sections and thinking about lines on the return. 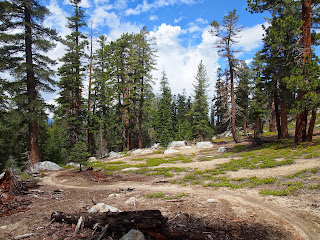 The trail work was impeccable, smooth bermed singletrack alternating with rock outcroppings with just doable lines through them. The trail leads to Armstrong Pass at 8,750 ft, and all I really wanted to do was to ride and ride. My legs felt fresh and there was no more altitude sickness. But I knew I had very technical riding on the way down and needed some gas in the tank.
On the way down, I surprised myself by making it over some nasty piles of rocks and down steep chutes, but mostly just enjoying the trail flow. I then connected with Armstrong Connector trail, sandy, much more rocky trail with lots of exposure, boulder ramps and log rides. Here, I had couple of close calls, and tore my right glove by squeezing between boulders at speed (the 760mm handlebars are really great for counter-steering!). 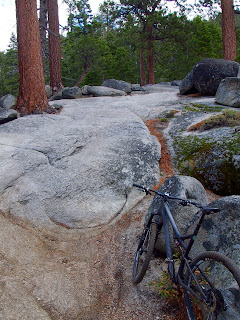 The absolute climax of the ride was the Sidewinder Trail, a series of high-bermed switchbacks where the trail apparently folds on itself, making you dizzy if not looking far ahead. My Garmin track shows I "flew" through this biking Nirvana at 10-15 mph, all I remember is a blur of turns. The trail ended at the bottom with many more berms and table tops, giving those who did not have enough fun on upper sections another chance to fly.
After riding these 16 miles of trails built with love for those who love true mountain biking, I realized how lucky I was to experience it all. Equipped with some skills, modern bike technology and time to travel to these destinations, I feel like I have never before had such a great time riding. Now I just have to find another excuse to ride at SLT.
Posted by Unknown at 9:26 PM