It seems that you cannot open a mountain biking magazine these days and not see some debate on whether flow trails are the end of the classical, technical, rocky and rooty (read New England) mountain biking and how these trails will make it easy for those non-fit, GoPro equipped crowds jam the trails. My first exposure to a flow trail was in 2011 during the BC bike race Squamish stage: the famous Half Nelson trail. I think it came as a surprise to most of the XC racers since I saw people riding it cautiously. I did, too. Few years ago, when riding at Squamish again, I was invited by a friendly local to follow him down Half Nelson. Wide bars, slammed seat, elbows wide and knees bowed, this guy flowed down the trail effortlessly, keeping his wheels in the air more often than touching the ground. Of course, he lost me on the second berm. 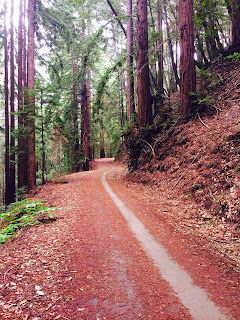 In the Bay Area, not one, but three new flow trails opened recently: one at Tamarancho - the Endor trail, one at East Bay's Crockett Hills and finally, a 4-mile long sculpted jewel at Demo. That's where I headed on Sunday, but thought it would be a good idea to climb 11 miles to Demo from Aptos as a warm-up. The Aptos Creek trail (above) flowed nicely and the surrounding redwoods were so calming. From the top, it is another couple of miles on the Ridge trail to the Flow trail. The flow trail has six segments and it was immediately obvious this was a professionally built trail. Names of sponsoring companies and bike shops hang on nice wooden signs from the trees. Once you point your front wheel down, you have no time to look around though. Now it was me with super wide bars, dropper seat post all the way down, on a 140mm carbon superbike! OK, I tried to keep my tires on  the dirt, but soon I found myself letting off the brakes and pumping the back sides of jumps. The fun seemed like it would never end and my legs, core muscles and forearms were getting tired. One run on this trail felt like 45 miles of trail riding! I was hoping for another loop or a ride down Braille trail, but after climbing out on Sulfur Springs and another couple of miles uphill on Ridge Trail, I was burnt. The 11 mile downhill back to Aptos was like a magic carpet ride.

Come Tuesday, I looked forward to go and see the 3rd stage of the Tour of California in Livermore. This year, the peloton, including the awesome Peter Sagan, were to fly just past our backyard! I have stopped following professional road cycling and don't really care all that much, but I admit, watching on a TV screen the peloton filmed from a helicopter resembles a multi-cellular organism flowing down the road, constricting and stetching, accelerating and turning. I checked the route map, the time table and equipped with a camera and a cup of Starbucks coffee, camped on the shoulder. The road was closed, cops guarding the intersection and there were other cyclists as well as spectators sitting in lawn chairs, all excitedly expecting the circus. The projected time for 26mph (!) came and went, but then a helicopter came over the Sunol grade, descended to highway 84 and flew towards us. The race was coming! I quickly set my camera for fast multiple exposures and watched the road. I could see some cars and motorcycles in the distance....then, nothing! We all watched the road show moving about a mile away, then turning on Valecitos Road and disappearing.

This is where Peter Sagan and Mark Cavendish were supposed to be! Oh well, let's hope for next year. I'm sure it will flow by fast.
Posted by Unknown at 11:03 PM