So feeling pretty good after the much needed recovery post the road tour, I went back to my older post to see if any races were happening soon. On Wednesday last week, I realized there was the new Hammerstein 8/24 race on Saturday June 9 and the registration was closing in a day. I signed up then went to research what race this was.
I rode my mountain bike for more than 8 hours before, even in a race, but never doing laps on one course. My preparation for the race consisted of making sure I had some spare 29er tubes, making eight PBJ sandwiches and buying a big jug of Gatorade. I left for Salinas and Monterey on Saturday morning, the race started at noon. I have never been to the famous racetrack at Laguna Seca before, this is where the Sea Otter takes place every year. Equipped with a brand new GPS, I arrived to the venue 30 minutes before the registration tent closed, but with an hour and half to get ready.  I have set up my very modest, solo racer pit, surrounded by sophisticated camp sites of racers doing the 24hr race, their teammates and crews. 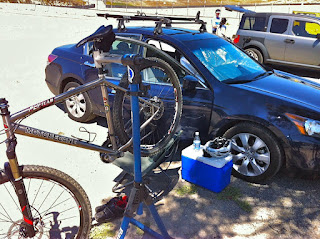 The lap distance was 10.7 miles, so I went out with one bottle of drink per lap. The first lap felt great, I thought, boy, this is going to be just a long bike ride. The course was a nice mix of fire roads and sweet singletrack, winding through a poison oak jungle. There were a few sand traps, but overall nothing too technical. The lap took me about 70 minutes, I switched the bottle and ate one PBJS, thinking OK, six, seven times more? On the second lap I tried to do the math, knowing that my brain would probably make a mistake as the fatigue would set in later. I figured six laps with no mechanicals should be about 7 hours. So I took it quite easy, visiting my pit after each lap to grab a fresh bottle and progressively less fresh peanut butter and jelly sandwich. These stops added to about 25 minutes of delays, so before the 6th lap, I just filled the bottle and grabbed a gel and finished around 7:25PM.
Overall, I had fun, liked to ride with others, I liked the course, it was an ideal track for a 29er hard tail. What I could not comprehend was how could somebody ride for another 16 hours after I went home. Those solo 24hr racers are alien species to me.
The results are not posted yet officially, so here is an unofficial evidence, the elevation profile of the 65mi/8900ft vertical ride, from the Garmin page: