As I flipped through some of my pictures from the April trip to Italy and the Garda Sympatex MTB festival expo, I realized there were a few pieces of bike technology which I wanted to share with whomever would navigate onto these pages. 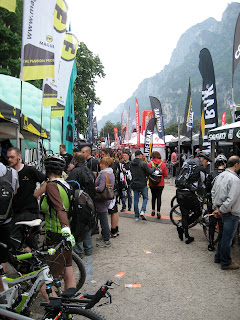 The festival expo was wedged into a busy Riva street and the big white tent at the race finish, making for pretty crowded two isles of booths. You were better off locking your bike to some post or fence and walking through the expo crowds. 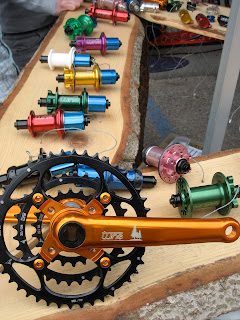 A German component maker Tune showed lightweight and colorful hubs and cranks, as well as an ultra light carbon shell saddle, which those guys swore was the most comfortable saddle for marathon events. I should have bought that one for the trans-California trip! 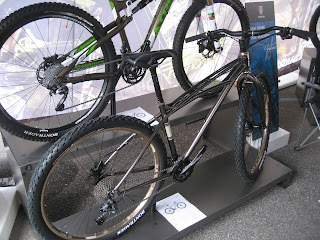 Trek had a few Gary Fisher bikes on display, now of course disguised as Treks. The Sawyer steel retro 29er bike is beautiful and I am sure that besides daily commuting duties, it could handle the rigors of bike touring, although it does not seem to have rack attachments (there are fender eyelets). 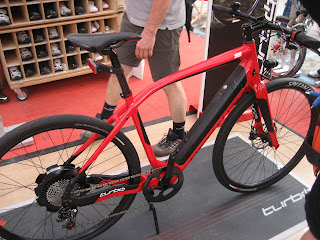 While I am not a huge fan of electric bicycles, this Specialized Turbo eBike surely caught my eye. The design is beautiful, including the down tube mounted battery pack and the hub motor. Just the Elektrak tires alone made me salivate! I could use those on my 29er as a winter commuter tire. They were prototypes, as was the bike, but hopefully one day they will be available (the bike probably won't, at least in the USA, read the Bike Radar article linked above).
Posted by Unknown at 4:25 PM