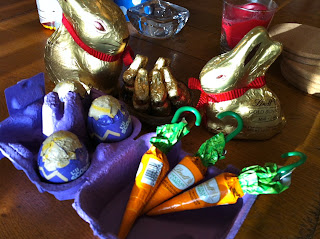 While the Orthodox denominations have to wait for their Easter on May 5th, and the Passover ends tonight, we Central European pagans follow the western tradition and celebrate Easter Sunday and Monday on the catholic dates. I have to say, Seattle's Easter scene far exceeded my expectations, although I did not see any men whipping girls booties on Monday (you can google what we pagans do on Easter Mondays...).
Sunday was not a day of a baked lamb cake or painted eggs. It was a day of our third attempt to reach the elusive Snow Lake on snowshoes. It was 72 degrees in Seattle and 55 in the mountains. The approach was easy, we already knew the route to Source Lake. Once we reached the expansive bowl below the Chair Peak, we saw this: 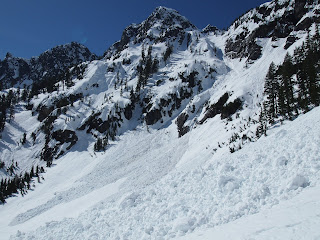 The avalanches did not look too fresh but the man-sized chunks of heavy snow make you think about the powers of Nature. So we took the direct route up a razor sharp ridge directly above us, making a fresh track. The ridge rises about 600ft in perhaps half a mile and it was a scramble often on all fours, with cakes of slushy wet snow sliding down the slope upon each attempt to get a foothold. 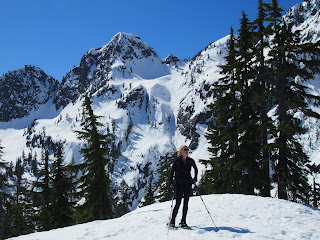 After a little rest at the plateau, a final push another incline and the view of Snow Lake opened.The picture below was taken from this location: 47.46010, -121.4504 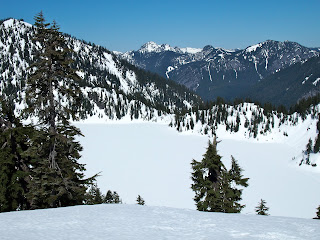 It looks like a nice lake to take a swim at in the summer. On the way back down, we realized that our snowshoes had practically no stopping power in the deep wet snow - the crampons just slid right through, making us loose balance, putting more weight on the rear of the snowshoes, resulting in an inevitable fall backwards. This was OK until we came back to the cliff we climbed up an hour ago. There was just no way to get down the "nose" other than uncontrolled fall. Since that seemed too risky, we chose to get closer to the avalanche field, where the hill slope was somewhat less steep. I have read before about how sliding snow packs the sides of its path, but the edge of the avalanche was like a bobsled track, packed hard and icy. So that's what we did - tobogganed 100ft down on our now quite wet behinds. Digging the snowshoes in had zero effect on slowing down, but eventually our ride ended at the runout zone.
At the end of this five hour outing, we were really glad to be back at the parking lot and 45 minutes drive from home.

Note: multiple chocolate animals were seriously hurt after this trip.