Several of my cycling coworkers participated in a charity road ride called Obliteride - The ride to end cancer, organized by the Hutchinson Cancer Research Center. In principle, I have nothing against organized rides or charity rides, I just don't see those events as a particularly special reason to ride a bike. Instead of paying $60-80 just to be allowed to ride 100 miles, I would get on my bike, ride the 100 miles for free and enjoy it. This particular charity ride really turned me off though. I sat through an hour long presentation, where the promoter fail to mention a small detail: you were supposed to raise $1500 for a 100mi course (they did say that), but in case you did not, they would take your credit card number and charge you those fifteen hundred bucks. I did not want to support such a method. So here, my official anti-Obliteride statement. Enough.

Instead, I found myself and three other mountain bikers in a huge cab of some V-8 monster truck, with bikes and tons of dirty gear in the back, headed east on I-90 to Kachess Ridge. As we pulled into trail head parking, we saw two mountain bikers riding up the fire road around the Little Kachess Lake. Our ride leader (super strong athlete, experienced mountaineer, funny guy) exclaimed "Losers!" I started to suspect this ride would not be what I thought it was going to be. An easy fire road ride up the lake shore, then a steep fire road climb and finally one of Washington's sweet singletrack downhills, right? "Nah, 100% singletrack" was the answer. 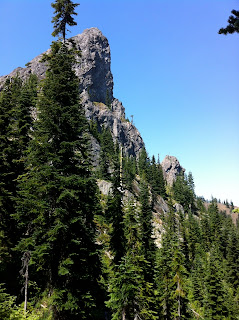 And singletrack it was, steep, rocky, rooty, with treacherous footing, at least 50% hike-a-bike, where lifting the bike over numerous rock drops was becoming old pretty quickly. My heels started to blister after about an hour, no wonder - we went up 2,500 vertical feet in less than 4 miles. Once on the ridge, the views were absolutely astounding, but riding continued to be very technical, up and down on a razor sharp ridge. 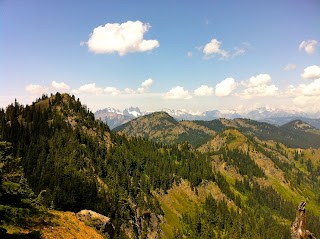 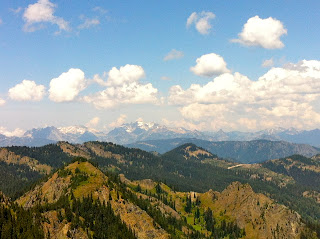 These mountains are not even the "real deal", these are South Cascades, North Cascades is supposed to be the real wilderness.
Just below Thorp Mountain lookout, I think we were all pretty tired by the strenuous effort and 90 degree heat. One of us took a bad fall, I saved an OTB by sliding off the back of the saddle and sending my bike down rocky slope, while getting punched in the crotch and stomach (ouch). From here, there were two options: hike a bike to the top of the lookout or a steep, 3/4mi descent to Thorp Lake. Since this ride was an out and back, I knew what the side trip to the lake meant, but I just could not pass on it. A swim in a cool mountain lake and feasting on some wild blueberries totally rejuvenated me. 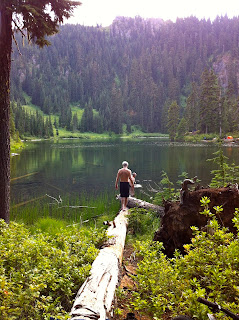 We climbed back to the ridge, surprisingly mostly in the saddle and feeling almost fresh, with our core temperatures decreased despite the afternoon heat. Once we took a look to the east side of the ridge, we knew we were going to be in trouble. Dark grey clouds filled the horizon, the wind picked up and a condensed moisture started to roll over the ridge. The air temperature dropped from 90 to 60 degrees. Nothing gets me move faster than an impeding thunderstorm at 5000 feet. On the next mountain top (it is unmarked on google maps, elevation 5,700 ft), nice sized chunks of ice started to fall from the sky, not too many, just here and there - golf ball sized. They got smaller soon, but now it really hailed. We pulled out our jackets and squatted under a tree to let the worst pass. What followed next was a 4.5 mile long blur of heavy rain, wet and slick rocks and roots, water flowing down the trail, lightning flashes, sounds of thunder and squealing brakes. I slammed the saddle, accepted the fact that I could not see much through my glasses, tried not to crash seriously on a few drop offs that came as surprises around the corners. I think I did OK, I crashed three times, once making almost a 360 when I lost my rear wheel on a slimy diagonal root, couple of times at low speed whet the tire traction became actually much worse than at speed.
Time at the finish: 7PM, ride duration over 9 hours, gps recorded 2:26 moving time (wtf??!! I did move the whole time, including when swimming across the lake and back, I swear!).
Posted by Unknown at 8:50 PM