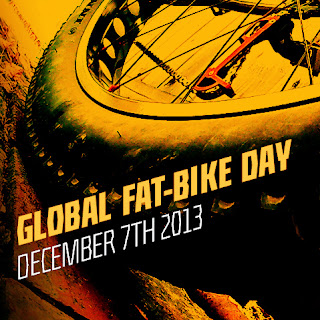 Well, not exactly. The world-wide celebration of bikes with fat tires was apparently scheduled for Saturday, but due to household chores and other duties, I missed it. It was also very cold in Seattle and even colder in the mountains, so I hoped for the temperatures to rise a few degrees on Sunday.

I bought a Sno-Park permit online, and those eighty bucks bought me a heated rest room and a huge empty parking lot at Hyak, right next to the Snoqualmie ski resort. My plan was to see what the Iron Horse rail trail looked like and then possibly find out whether the Nordic ski trails in the area would be bikeable. 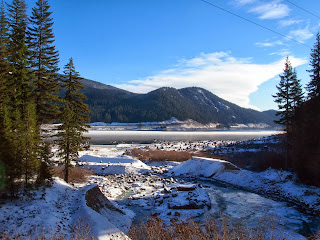 The (closed in winter) entrance to the Snoqualmie tunnel was just north of the parking lot, going south the trail followed the shores of Keechelus Lake. The surface snow was packed by service trucks, skiers and snow-shoers for a while and riding the fat bike on it was easy. Almost too easy, I thought, except when the packed tracks ended and a frozen powder with a thin crust on top started, all of a sudden if felt like riding on a flypaper. 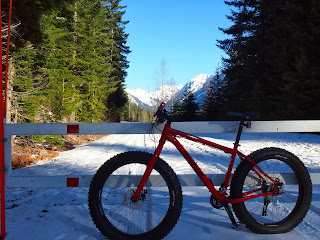 Riding around the resort and adjacent vacation homes meant frequent stopping and explaining to onlookers why the bike had such fat tires, but it also helped me to find the connection to the XC trail. The trail was basically a fire road (NF9070), first paved, covered with a sheet of pure ice - no problem for Pepper as long as I pedaled smoothly and stayed off the brakes. Then the snow got deeper and the road pitched abruptly upward. There were two truck tire tracks, and a ski track in the middle. I stayed in the trough, where the rolling resistance was minimal. I was surprised how well the climb went, soon I was out of the valley shadow and hit the sunny slope of the mountain. 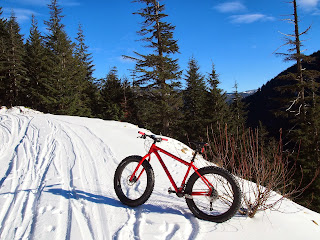 It was only 1 PM, but the low angle of sun rays made it feel like a late afternoon. When I turned a bend, I came upon this fantastic wall of ice falls. Thanks to a couple of guys with trucks who went looking for Christmas trees, I am in the picture (another 10 minute lecture on what is the bike good for, funny my first snow ride and I am educating the Washingtonians on advantages of snow bike winter travels...). 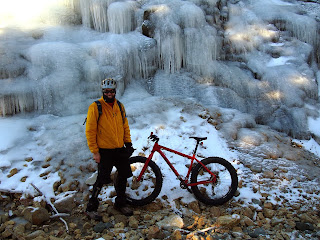 More hard climbing efforts took me to the intersection with the PCT, but before that, I met a couple on cross-country skis. Of course, Pepper was the center of attention, but it turned out that Tim was a director of the Snoqualmie XC trail system and when he said "We have to make sure to add you guys in the system", I felt I just fulfilled my fat bike advocacy deed! 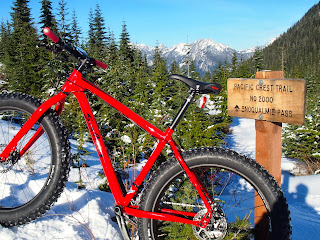 Above the PCT (I guess I must have been above 4000 ft), the going got much tougher. The truck ruts became knee deep in soft, powdery snow, and keeping my balance inside the track was difficult. Every time I caught a pedal on the side, my front tire would hit the snow bank as a reaction, causing me to come to a halt, followed by cursing while trying to get going again. Eventually, the truck tracks ended in deep powder. I tried another route, the same ending. So I consulted a map while downing some sweet calories and realized I was at higher elevation than the loop around Mt. Catherine should follow. I remembered Tim saying that the whole loop was a fire road like this. After some scouting, I found an overgrown trail with fresh ski tracks. The snow was deep here, but soon the trail dropped down in swoopy switchbacks. Riding and especially turning in deep snow was fun, the bike drifted and surfed, the front wheel pushed in turns. Some sections were wind blown crust where I left only a barely visible marks of tire knobs. 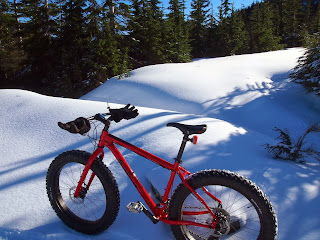 At the bottom of this downhill, I met Tim, his wife and their dog again, and they advised me to follow their tracks and find a way through a canyon, up a saddle over a ridge, where there would be the ski resort on the other side. I got all excited that after all, I would be able to complete the 15 km loop around the ski area. What I did not realize was that the ski tracks I followed on the way down must have been theirs and these guys were actually returning back to the ridge. What I did realize when the trail ended on a sharp edge of a rocky canyon (with a nice close view of a ridge behind which laid the desired destination), was that I would have to hike out of here. In deep snow, with the last sun rays of the day and the temperature dropping rapidly. Getting cold was actually the last of my worry on that hike, pushing a 30+ lbs bike up deep snow covered slope was surely a body heat producing activity.

Forty five minutes later, back at the PCT intersection, I bundled up for the descent and kicked the pedals. I have to say, downhill snow biking is a great fun, but one may actually freeze while having  fun. On skis, the steeper the slope gets, the more you have to work, and stay warm. What saved me probably from a likely frost bite (or at least a brain freeze) were lots of washboard brake bumps on the trail. Hitting these at speed on a fully rigid bike, with my arm and neck muscles rigid with cold, felt like my neck vertebrae were about to snap any moment.
The toughest part was to defrost myself back at the car, despite the heated wash room and a thermos full of chai with honey. I guess for my very first ride on snow, I took a bit more than I originally planned, but by stretching the goals, we learn the endurance, right? GPS track here.

During the 50 mile drive back home, I kept thinking about how new and exciting this whole fat biking thing is for me. I also realized that using an all-terrain and all-season bike brings additional risks. Mountain biking has, of course, an inherent risk of  mechanicals, crashes etc. and requires our ability to make it out of the woods. In summer though, there are many mountain bikers on trails and help may be available eventually. On my first couple of fat bike rides, I experienced two environments that despite its absolute beauty and excitement of being actually able to ride there, made me think of "what if". Riding on beaches means you should know the tide times. One would not want to get locked between the surf and the house high piles of logs and driftwood (here in WA and OR, too I guess), with no escape route.
On the snow, there is avalanche danger. It is very real here, people die every year in avalanches just outside of town. I am not really sure if it makes sense to carry any avalanche gear on snow bike rides, since there likely would not be anybody (with a beacon, probe and shovel) to witness the avalanche and start the rescue in time. An obvious solution to this is not riding alone, but apparently there are only 10,000 of us in the USA riding fat bikes! And I don't know anybody here who does.

These kinds of thoughts bring me to another web found information: the Global Fat Bike Summit takes place January 24-25 in Ogden, UT. 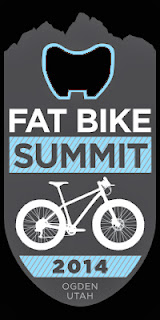 I found the web site very useful, especially the slide presentations are quite educational. There is also a list of areas allowing fat bikes on winter trails, with description of issues and future plans. And there will also be a race in Ogden! Perhaps, just maybe, if the stars align right, Pepper and I could show up there. Who knows what will happen in 2014, but fat biking will be a part of it.