Turkey Trot to the Airport

A bright, sunny, unseasonably warm Sunday just begged us to get out. Late fall or early winter days in the Bay Area can be like this: a perfect visibility (except the smog filled Silicon Valley), fog free coast and no tourist traffic. While the Bay side hills are all brown and dry, waiting for the winter rains to erupt in a short lived coat of green grass, the ocean slopes of Santa Cruz mountains with the remaining redwood groves have enough moisture and shade. I really wanted to show Marketa my "secret" spot high on the Butano ridge - a defunct airstrip. I rode my bike there many times but we never visited the place together. 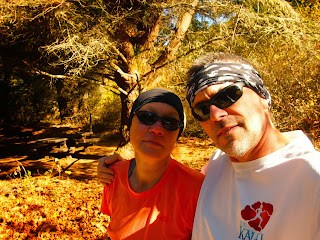 We started from the still unattended and definitely under-visited Butano State park, just south of Pescadero. I had a loop run in mind, but the park map showed no exact mileage and Marketa's Garmin was probably buried somewhere at the bottom of a drawer containing running gear (she cares about miles ran about as much as I do, these days). A singletrack trail (Six Bridges) took us to Olmo fire road and the climb began. 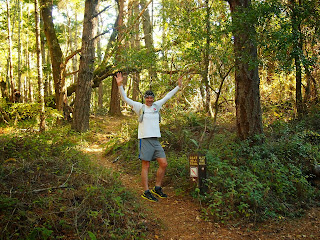 We took paralleling single track trails where possible, but eventually had to scramble up Olmo road, which had some super steep eroded sections, many false summits, several downhills where we lost those painfully gained vertical feet. 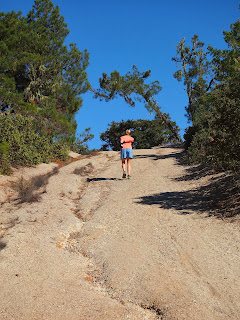 Teh fire road follows the spine of a ridge across the Butano Ridge road, on the other side of Little Butano Creek  valley. Both of these fire roads go through rapidly changing micro environments - from redwood groves to sandy exposed spots with pine trees and views of the ocean below.  Olmo road tees onto Butano Fire road and from there, it was a short, almost flat stretch to the runway. 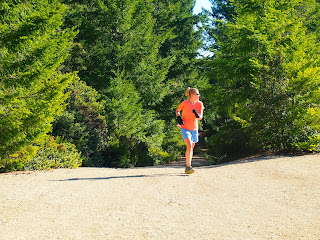 The airstrip is abandoned and unmaintained, with deep ruts and bushes growing on it, so landing any aircraft here would be more than risky. Yet every time I was here, I imagined landing a glider or an ultra light plane here (it has been a long while since I last piloted any of these, but imagination is a perfect flight simulator). The airstrip is on top of a ridge, surrounded by tall trees on three sides and a deep canyon on the south approach side. It is also short. So I play my mental flight simulator while walking around the runway looking for a shaded place to have a break: I'm coming in from the north, just skimming the tall trees, checking out the landing zone on my downwind leg. Then a sharp left turn and I have to push down to the canyon on my base leg, making the edge of the strip visible over the left wing all of a sudden way higher than my altitude. The final approach turn is scary, this is like turning inside a crater. Lots of speed in the turn makes it safe. On the final approach, I slowly lose speed by pulling up to copy the terrain beneath, just to basically stall my plane the moment there is the concave runway under the landing gear. The final approach must be flown with excess speed, since landing uphill will diminish the airspeed very rapidly. But too much speed and I may end up in the bushes at the far end. My palm is all sweaty on the controls but I nail it and come to a full stop just where the trail crosses the airstrip. 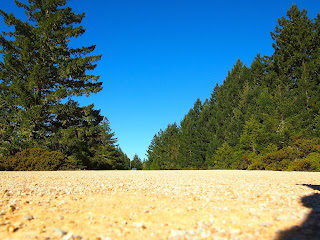 Back on two feet, there is more sandy fire road ahead of us, this time all downhill.  At first chance, we abandon the fire road for a single track (Jackson Flats) and it turns out to be the most beautiful trail of the whole run. 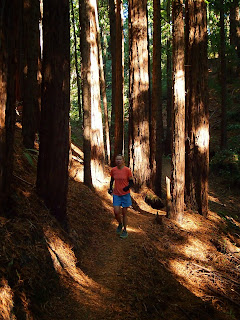 As we descend deeper into the canyon and the afternoon sun descends towards the ocean, it gets colder, but who is to complain about 60 degree "cold"? After crossing the creek and a short stretch of pavement, we are back where we started three (?) hours before. I guess we did not count either the time or the miles, but rather enjoyed the day out and those post run tangelos and grapes grown and kindly provided by a friend. For more information on Butano park trails look here.