A high pressure area has been affecting our weather for the last week or so: sunny but cold. Cold enough to reach sub-freezing temperatures in Seattle (!) and twenties on the "east side". When several ride invites for trails east of the city landed in my in-box, I considered it but then remembered what one veteran mountain biker said on one of early spring rides: as the snow melts, we move to the alpine terrain, when the rains and cold come in the fall, we descend to the shore and the islands. Makes sense, the body of water maintains a temperate climate year around. I have been planning on riding couple of areas in the San Juans and this weekend happened to be free of office work so I traveled.
The town of Anacortes is on Fidalgo Island, but you can drive there. The ever useful evergreen Wiki site gives all details about the Anacortes Community Forest Lands (ACFL), including detailed trail map links. There are three general areas that can be connected into one epic ride. I asked about the trails in a local bike shop and was told "some are somewhat technical." I started at Cranberry Lake and no kidding, the first trail I hit was indeed technical. Lots of transverse roots and rocks, including large granite slabs and rocky step ups and drop offs. These trails were much more Campbell River than Issaquah. 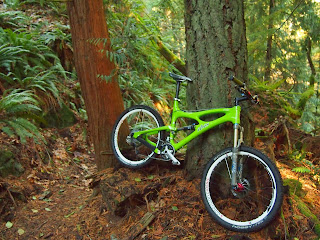 I rode in a clover leaf pattern around the lake, either climbing with my chest on the handlebars or descending with my ass hanging over the rear tire. After getting a blister on my palm, I headed south and connected with the Heart Lake area. 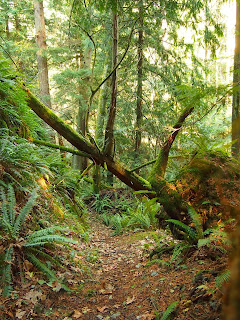 I followed increasingly technical and steep single track along Heart Lake Road, until my legs just gave out. This happen to be on a moss covered rocky outcropping, a great place for lunch. 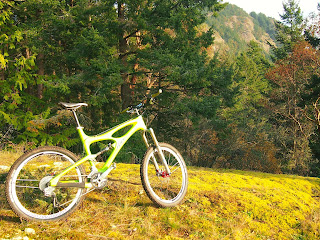 I did not even attempt to continue further towards Whistle Lake, just look at the trail map, it is dizzying. On the way back, I tried to take other trails for variety and stumbled upon trails 109 and 129. These trails were real gems. Back at the lake,  my Garmin showed measly 13.5 miles and 2:05 hrs. Now, I know I rode for about 4 hours and with the exception for perhaps 20 minute lunch break, I rode non-stop. My legs felt like after 20 miles. I have a suspicion that after the latest firmware update, my little GPS is cheating on me!

I decided to stay in town and found a decent place to stay, right off the main street. Since the temperature was around 40F the whole day, it took me about 30 minutes in hot shower to gain enough energy to venture out and find a place to eat. At the Rock Fish brewery, they not only have good beer (for USA) but their 3-piece fish and chips is like three whole fish! Two beers and those three fish and I barely made it back to the hotel.

Next morning, I was the first car in a ferry line to Orcas, just before sunrise. From the Orcas Island ferry terminal, it took just 25 minutes to reach Moran State park. My plan was to follow this description of a ride to the summit of Mt. Constitution, the highest point of San Juan islands. The ride starts with a brutal climb. No warm-up. The first switchback threw me off bike. Then I climbed some more, then I hiked 50 meters and rode 50 meters. Then hiked some more. 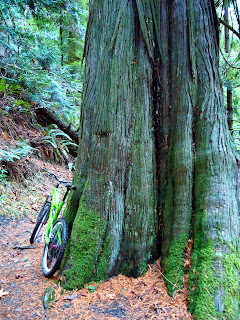 At some altitude, I have crossed the zero isotherm and trail surface became frozen, with ice slabs filling spaces between rocks and frozen mud mixed with large ice crystals. The upper part of the climb was less steep and I was also out of the deep woods, riding in a pine forest with bald, rocky and sunny spots.  As I finally reached the view tower, after about 2 hours of climbing, my GPS read 33 minutes! 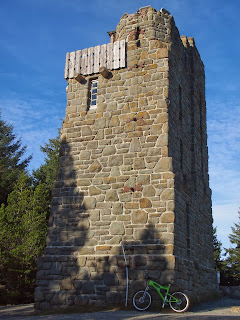 Damned be the technology, the view was worth it! I bathed in the morning sun and enjoyed the far far views - Canadian Rockies, Mt. Baker, the whole archipelago, Olympic range, even the tip of Mt. Rainier above the horizon. 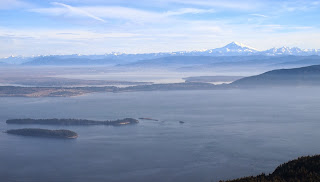 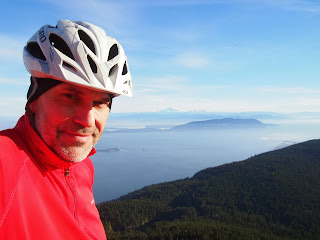 Descending back to the saddle on the icy trail was more enjoyable than climbing it, but then, after Cold Springs, a real treat of the day awaited. Flowy, soft ribbon of single track, just steep down to make it interesting and not overheating the brakes, with occasional short climbs.

I swung by twin lakes (almost identical twins) and continued along Mountain Lake towards Cascade Falls. A short hike to the waterfalls for an obligatory picture: 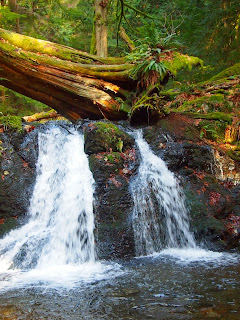 The overall downhill part of the ride was peppered with short, punchy climbs, where lofting the front wheel over thick roots and rocks was becoming progressively more tiresome. The final stretch of trail along the Cascade Lake was the last drop, but I drank it all. 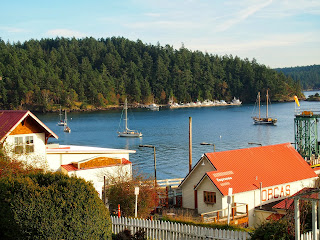 A late afternoon ferry ride back to mainland, after drinking lots of coffee and eating one of each of the pastries on display at the ferry village. 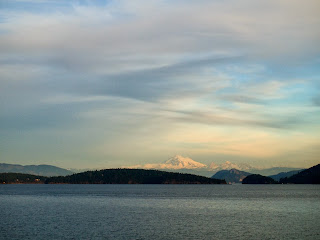