A two day storm has dumped about two feet of snow at Steven's Pass. Sunday was supposed to be nice and I could have taken the Mojo out on some new trails, but for some reason I wanted to go trail running. My mind was set on a ridge south of I-90 which I saw when riding the Iron Horse rail trail in August.
I looked at the trail map and saw it was a linear trail with two trailheads: one at the Rattlesnake Lake and a western one at Snoqualmie Point Park. I picked the western trailhead for two reasons: less driving and the fact that from the lake, the trail climbs the rocky wall and gains 1000 vertical feet in 2 miles. 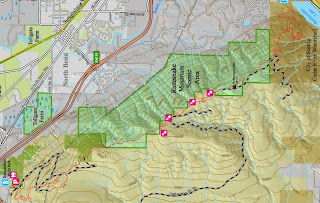 The total trail length was listed as 10.5 miles. I thought that perhaps, if I felt good, I could run about 8 miles to the ledge above the Rattlesnake lake. I remember running 8 miles quite recently, actually about 9 around Magnolia and that left me pretty sore. Now some inner voice was telling me that I would have to get back somehow to my car, which could possibly add up to 16 miles, but I tried not to listen to it. 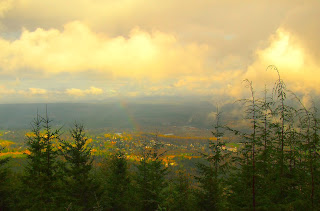 The trail started with a long climb, as expected. I like climbing, both on bike and on foot. Views of the valley below opened up at few spots, but there were lots of clouds above and the weather was quite unsettled. 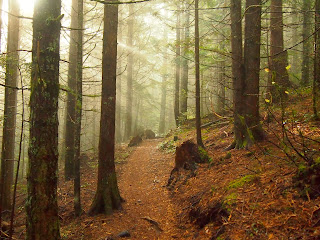 The best part was of course the trail itself. If I was to list 10 best things about Washington, trails would take 1-9 (beer would be number 10). 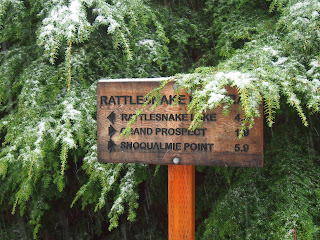 As I approached the East Peak (East Summit?), I crossed the snow level at perhaps 3000 ft. Not only there was a bit of fresh snow on the ground, it also snowed quite heavily just as I came to an intersection under the tower. At this point, I had ran 5.9 miles and expected to have about 2.5-3 miles more to the ledge, which should be about 1.5 miles from the lake. 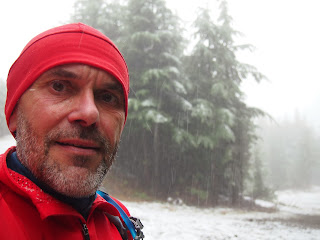 The descent from here was a welcome change and I was almost surprised to reach the ledge sooner than I expected. Just as I carefully stepped on a rock shelf above 1000 ft abyss, I got a last glimpse of the lake and cars parked at the lake. A shroud of vapor filled the valley quickly and despite me waiting patiently and getting cold, the view did not open again. 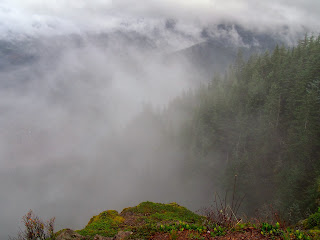 Oh well, it was time to turn around and slog up those 2 miles back to the summit. The camera went into the Camelbak and out came bars and gels. I was able to run most of the uphill, although very slowly. Back at the high point, I put on gloves and an extra woolen head band, expecting to lose body heat on the way down. 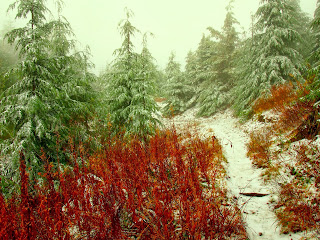 It was not all downhill from here, there were a few leveled and even uphill sections and I was enjoying myself on the trail. I got a bad cramp with about 2.5 miles to go, I guess I was so deeply immersed in absorbing the surrounding natural beauty and thinking about many things at the same time that I forgot to drink. The final part was very steep down, I recalled sweating on the way up but at this point, my legs were hurting a lot trying to step carefully and use the brakes. Back at the car, my watch showed 4:29 time, but the GPS insisted I ran only 7.83 miles. Frankly, I can't care less. I stopped measuring distances when I moved to Seattle. A beauty of the environment and good feeling workout are the metrics I use both for mountain biking and running. For me, this works so much better than PRs and Strava.