In this post, I am catching up on the last weekend's ride at the Olympics. After testing my new fat bike on 15 miles of beach and spending a nice evening with my Czech friends at the Kalaloch Lodge cabins, I planned a ride around Lake Crescent and up along the Sol Duc river.
This summer, we spent a weekend on the Olympic Peninsula and I managed a ride on the Olympic Discovery trail, mentioned in this blog post. The ODT continues along the shores of Lake Crescent as the Spruce Railroad trail. We ventured on this trail during our summer trip, thinking it was a rail trail that Marketa would enjoy riding, but found the trail to be a rooty singletrack. So that's where I started last Sunday. 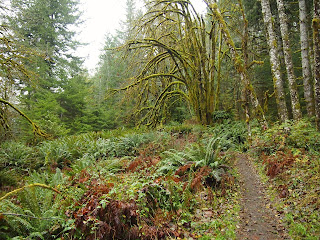 The singletrack dropped steeply to the lake level on the first half mile and continued over rocky outcroppings along the water.

The bike rode the terrain well, I pumped the tires up to a ridiculous pressure of 15 psi since I knew most of the ride would be on pavement, but the fat wheels rolled over smaller obstacles like a 29er (which the wheel circumference is close to) and bounced a bit off bigger rocks. Landing the rigid fork on some step downs left my wrists wishing for more cushy handlebar grips (which I got by now, red ESI silicone chunky grips). But soon I was on a straight, flat rail cycle-strada, pushing the big bike through a layer of colored leaves, surrounded by cedars and the rain forest. 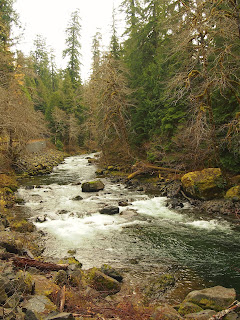 After about five miles or so the rail trail ended at highway 101. I crossed the highway and continued up on Sol Duc road, alongside a river of the same name. Or perhaps it was called Soleduck river, as the welcome sign said? The road climbed towards the hot springs resort (closed) for 10 miles and then two additional miles got me to the trail head at the end of pavement. I arrived there quite wet, since I dressed for wet weather in layers of various water-proof membranes. It did not rain, but the air was saturated and it was damp 45F. I left Pepper locked up at the trail head kiosk and hiked at a fast pace to the waterfalls. 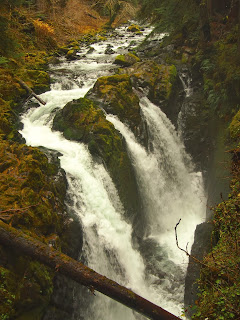 The falls did not disappoint, the river was flowing despite unusually dry fall we have been having here. I hoped to see some Coho salmon, which is supposed to go upriver during late October and early November, but I guess salmon were on a different schedule. Back at my bike, I zipped up all jacket vents, pulled the hood over my helmet, cinched all cords and tightened all velcros, for the 12 mile descent.

The way back was uneventful, I let lots of air out of the tires for the last section of the trail, which made for nicely soft ride. Back at the car, I looked at my watch and realized I was out there for about six hours. I did not stop much and thanks to the stability of the fat bike, could eat my bars while riding. My GPS was dead, since I forgot to turn it off the day before after having so much fun on sand and logs. At home, I let Google maps to show me the route, turns out it was about 46 mile bike ride and couple of miles of hiking.

I was tired at the end of the day and had a long trip home, but I don't think I was more tired than I would have been riding my 29er hardtail. The fat wheels roll very nicely once up at speed and the rigid frame is efficient. What the bike is not good at is abrupt changes in momentum over steep ups and downs, but these bikes were not intended to substitute full suspension mountain bikes, of course. I look forward to bring Pepper to packed snow trails this winter. It will be a perfect plan B for non-powder days!