Running in the rain

It seems that mother Nature is trying to catch up on the hydro deficit of December to February now in March. We are getting soaked and so are the trails. It is good of course and the vegetation responds with an explosion of green mass. My nose, eyes and ears respond to the pollen amounts with tears and itching. Whenever there is a rain free day, I go to run some of the neighborhood trails, either the XC course or Edgewood Park. On Sunday, the wet weather started as a drizzle, but the forecast called for drier conditions in South Bay. We drove to Los Altos for a jog down memory lane, or to be specific, down the Steven's Creek trail. We found the trail to be now extended further west, to the level of Cuesta Park. We ran four miles out to the Computer history museum and back for a total of eight miles. We were soaked but after a while, it did not matter much. One lesson learned, though: guys, when running in wet weather wearing multiple layers, tape your nipples! 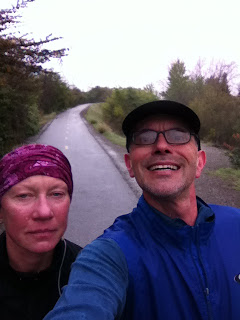 Monday this week seemed like the only dry day of the week, so I went out for a longer road bike ride to get at least some miles in before the Garda race. It was a steady pace mostly flat riding down the valley south towards Cupertino, but Los Altos hills on Elena and Redwood Gulch from Steven's creek to Highway 9 as well as Mt. Eden road hills added some variety to the ride.

So what's next? Biking in the rain? Horror! Not unless I'm forced to! I hope it snows a lot in the Sierras this week.....