Mt. Umunhum is the fourth highest peak of Santa Cruz Mountains, according to Google. I have ridden my bike to the summits of Mt. Hamilton, Mt. Diablo, Mt. Tam and several of the high points on the peninsula Skyline ridge, but I have never been to this mountain. You can see it from almost every high elevation point around the Bay, and it is easily recognizable by the silhouette of an old military tower on the top.
After a few days of being chilled by the infamous "Belmont blow" and some harder trail running, I came up with an ambitious plan to ride to Mt. Umunhum, crossing several mountain ridges along the way, hoping for warmer temperatures of the South Bay.
The ride started at Steven's Creek park and after a quick climb on Mt. Eden road and a descend to Saratoga, I pointed my front wheel upwards onto the Bohlman Rd. This is a 4-mile hill with an average grade of 9.8%. As I started climbing, I knew this was not my day. It was hot, my legs were sore and I sweated like a pig, feeling all the warning signs of an incomplete recovery after previous day's 11 mile run. But I made even the super steep section of "On Orbit Rd" without stopping and eventually reached the 2500 feet summit. The views from this road are amazing, this one is looking towards the Cupertino quarry, Montebello Rd and Black Mt: 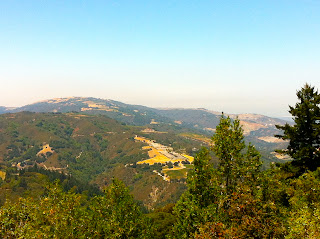 But on this day, neither the views nor the interesting architecture of some of the hilltop houses improved my mood. 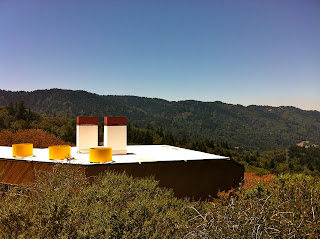 So far, I could not see the mountain I was trying to reach, but after cresting the ridge and starting to descend on the Montevina dirt road, Mt. Umunhum suddenly popped into a full view, seeming so much closer than before, I guess because I was a lot closer to it. 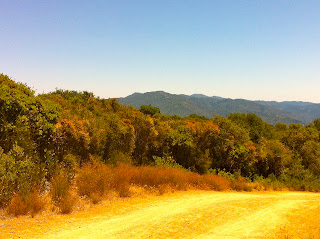 This picture does not capture it well but it is the leftmost peak on the horizon with the square object. I could also see the whole Lexington reservoir and the Highway 17 valley down below. Santa Cruz mountains on the first horizon, then the Monterey Bay fog and the real peaks of Ventana wilderness beyond. 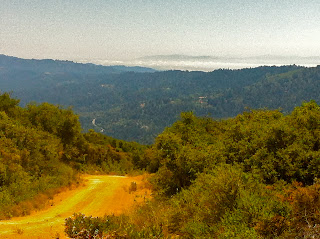 Downhill on Montevina was cool, but as I reached the reservoir dam, I realized how much hotter it was on this side of the ridge. Lexington lake is a drinking water reservoir, but there is no water source there, nor at the adjacent St. Josephs regional open space, and none as well inside the Sierra Azul preserve, double checked with the park ranger. At this point, I was not low on liquids, so I started climbing on the Limekiln trail towards Mt. El Sombroso (2,999 ft). I really don't want to whine here but the steep loose, rocky and dusty climb took the last milliliters of my mojo out of me. When I reached an exposed ridge and saw the next "wall" of a fireroad ahead, I bailed. 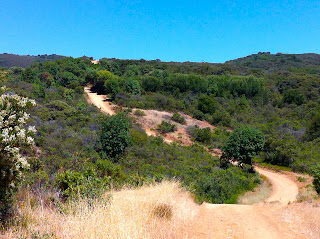 I took the Priest Rock trail back down to the lake and crossed on the northern side of Hwy 17. The climbing was not over yet, though. Black road to Skyline had inflicted some serious pain on me before, but I knew there was a school and water faucets on this route, so that's where I headed. The water stop helped a lot, but I rode the almost 10-mile long climb in a "just spin the granny and you will eventually get there" mode.
From the highest point around the Castle Rock SP, it was all fast downhill to the car. So, Mount Umunhum stands unconquered, but at least I know what to expect on my next attempt!
40 miles, 6600 feet vertical, max temperature probably close to 100F, at least 20 miles short of the goal.
Posted by Unknown at 11:28 AM