This year, America's birthday fell on Wednesday. It sort of made me think about independence during this whole week. The definition of "independence" can be found in Wikipedia, interestingly it says "Disillusionment rising from the establishment is a cause widely used in separatist movements, but it is usually severe economic difficulties that trigger these groups into action."
While many Americans stick to the ideal of independence no matter how much the system has them by the balls, that is not what I would like to write about. However, I am sure my recent thoughts about how to become more or less independent on the corporate circus, which chews you up and spits you out on the rubbish heap (as Connie says in Tinker Tailor Soldier Spy), were no doubt a result of my recent job loss.
So on the Independence Day, my friend Pavel and me decided to drive to the Wilder Ranch state park on the coast just north of Santa Cruz. The park has a variety of trails, from dusty doubletracks on grassy ridges, to singletracks winding through oaks, redwoods and eucalyptus groves, to some pretty rocky trails. The gem of this place is the Enchanted Trail loop. 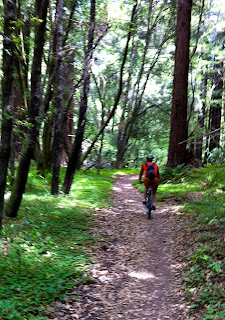 We cris-crossed the park and finished the ride along the coastal cliffs. For the whole ride, I felt free of worries and independent. On the way home, Pavel and I discussed many ideas for startup companies, I bet at least one or two would work. Who wants to invest in us to make us independently wealthy? 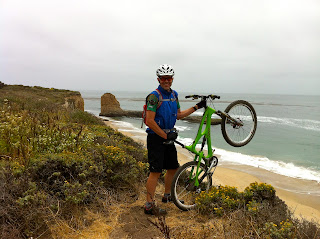 Then on Friday, I had a meeting set up at Philz Coffee in Mission Bay. It was about a small company whose technology fascinates me. Having a whole day to get to the meeting and back, I decided to ride. I took the Bay Trail route, following my old work commute to roughly Genentech. From there, I entered San Francisco on Tunnel St. and onto the 3rd street. The neighborhood abruptly changed from mostly ethnic African to the yuppy environment of the new UCSF campus. I arrived at the meeting point right on time in two hours. The coffee was some of the best I ever had and the networking meeting was productive. Sixty eight flat miles, almost five hours of riding and close to two hours of talking science. Isn't that being independent on cars? (Nobody followed me to Philz coffee...)

Being pretty tired after the bike ride, I decided to go for a short run today. I would run in almost a shoe-independent fashion, wearing my Vibram Five Fingers. I bought these weird looks inducing "shoes" for the California bike tour in May, thinking there was not going to be much walking and for their weight (or lack of thereof). After the 6 mile hike a bike up Tehachapi pass, I had blisters, but not too bad. Thus the idea of running seven easy miles on the Sawyer Camp trail. 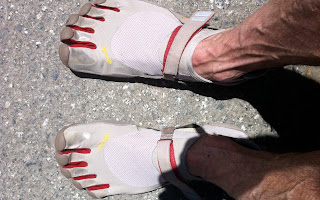 I am so used to how these gorilla paws look when you look down on your feet, and my legs felt light and my stride became quite natural after a mile or two. At the turning point, I knew I would have blisters, but the last mile felt great, fast and unweighted by heavy shoes (I run in burly trail running Adidas shoes). But the blisters were there. I hope my icing session (both internal and external) will take care of it. 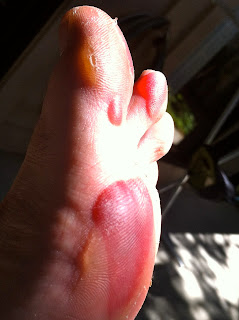 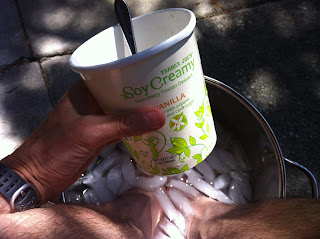 I also think I have discovered the best application of these "barefoot" shoes: they provide a really great feel on pedals of your sports car! 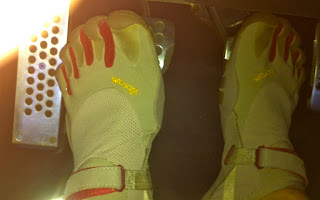