Sunday July 29 was the International San Francisco marathon. Both Marketa (full marathon) and I (second half marathon) participated in the race. Neither of us really trained for it, we had signed up in the winter months when it seemed like a "fun" idea to run in the city among thousands of other people. Both of us have been running mostly on trails lately, putting in decent mileages, so we did not think about this event as anything exceptionally hard.
The logistics of the SF marathon are difficult: packet pickup one or two days before means dealing with the crowds and lack of parking. The race day was even harder: I dropped Marketa off at the Ferry Building start at 6AM, then drove to the Golden Gate park to leave the car at the underground garage (supposed to open at 6AM according to the website, in fact opening at 7AM) to get to the 2nd Half start line at Spreckels Lake. 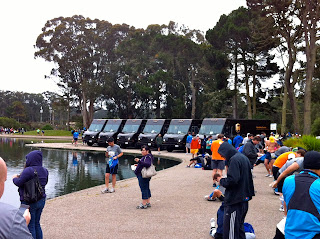 Al least, there were enough port-a-potties here, although the line was endless. The full marathon area was even worse, with many restrooms not easily visible from the start and no clear instructions. 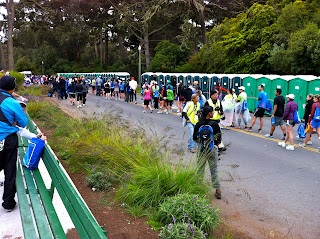 Then of course, there is the weather to deal with. Many hot weather states (AZ, TX) have marathons in the winter, which in my opinion should also be the case for SF. One of the attractions of running in SF is supposed to be the views of the city. In a dense morning fog, there are no views from the Golden Gate bridge. Fifty degrees Fahrenheit is supposed to be an ideal long distance running temperature, but drizzle and humidity makes it feel even colder, at least to me. The fog did not break even on the usually sunny Embarcadero site of the town at the finish line, until noon, so the Mylar blankets were used by many finishers, who kept shivering in the fenced off area, standing in long and slow lines after getting their race medals. 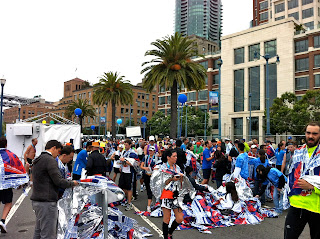 We both finished and both of us actually enjoyed our runs, simply because it feels nice to be running. OK, it did not feel that nice when I started to cramp after mile 8 on a steep downhill, and Marketa did not take her arm warmers and gloves off for the whole foggy run, but there was a sense of accomplishment for sure, when we met in the finish area. 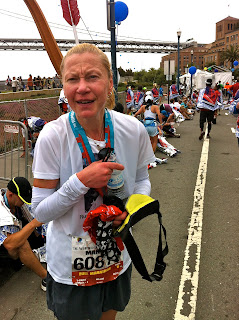 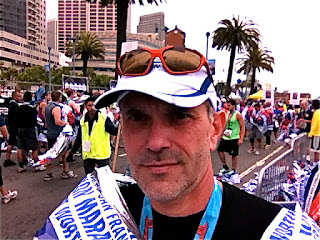 I chose the 2nd half marathon because Marketa and I finished within a short time from each other and could meet at the finish. I was also looking forward to running around the Golden Gate park, which is beautiful, even on a gloomy and drizzly morning. I was curious about the famous Haight Street, but frankly, I was disappointed. Mostly by the terrible street surface, which had me looking down not to trip in potholes, but whenever I looked up, you see poles and wires, like in this image snatched off from Wikipedia: 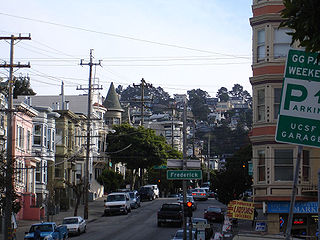 I am sure to many people this is just a part of the neighborhood's character, but I cannot help myself but think that it reminds me of New Delhi more than a modern American metropolis. The next part of town along the course, between Mission St. and Mission Bay was really bad, I would not come here by myself at night. Mission Bay is one huge construction site these days, with the new UCSF campus and many biotechs finding a new home here. 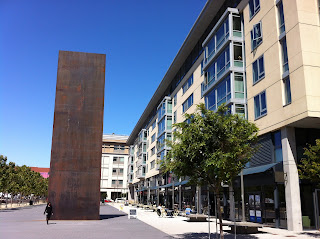 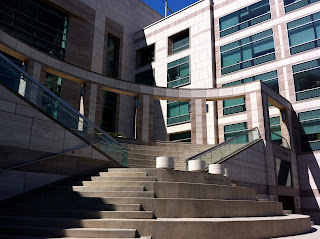 The new buildings are very modern, but the huge structures of concrete and glass made me feel small and lost. So from a neighborhood which looks like it was built by bums to a socialist style opulence. I think I would take the newly yuppie-zed Czech suburbs... 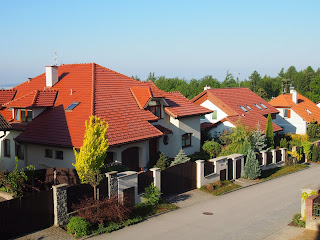 ...or a historical Italian town 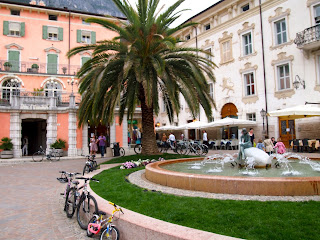 ....over SF. So to finish my negative blog post on a negative note: Sorry Frisco, I am not coming back to run or bike your streets again!