The type of riding I do here in Seattle has changed from previous seasons in California. I have sold my road bike and don't do those 5-7 hour hammerfest rides with lots of elevation feet. I ride a 29er hardtail with slicks on work commutes and paved or gravel paths. What I have been focusing on is mountain biking and exploring the amazing variety of trails. Thus, my riding volume in hours and miles dropped a lot (I don't actually keep track anymore), yet it has been more than compensated by the enjoyment of scenery and the challenge of a technical singletrack.
So the possibility of using the long July 4th weekend for a trip to Whistler to watch my friend Martin go through the finish chute of Stage 7 of the BCBR, and ride some of the best world's singletrack (as they say) along the way was a strong lure.
Equipped with some newly gained confidence about my improving technical skills and being aware of my lacking endurance, strength and lung capacity, my first stop was Squamish, BC. I entered the vast trail system at Alice Lake Provincial Park, and started climbing on a fire road, hoping to follow more or less the Test of Metal race course. Short way into the climb, I came upon BCBR course ribbons and realized that the race course has been set up a day before Stage 6! 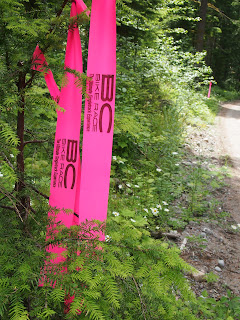 Wow, I thought, this will solve any of my navigation problems and let me recall the race memories from two years ago. It was an early afternoon on a warm, sunny, breezy day and I felt something like an adrenalin surge as soon as I started following the course markings. Fire roads soon turned into a singletrack, I rode through a sketchy section remembering my nasty crash here in 2011. Before I knew it, I was at the top of Half Nelson, being offered a ride with some skilled locals. I followed one of them, Chris, through the first few berms of the jump course Half Nelson is, immediately realizing how poor my skills were compared to these guys. Seatpost slammed down, I really tried hard to carve the berms and not to touch my brakes much, but on a trail like this one, you either get lots of air or brake and ride the ramps slow. At the trail bottom, I thanked for the offer to be shown more trails, using the opportunity to ride the race course as my excuse. I don't have any pictures from this trail and if you rode it, you'd understand why - stopping to get your camera ready kills the flow. 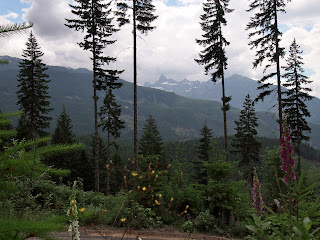 Next came another relaxing fire road section, with nice views of the mountains, but Pseudo Tsuga singletrack left no time to look around. 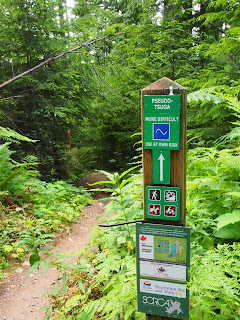 The descent on these switchbacks was fun, the trail smooth and I was riding fast. My speed dropped shortly after crossing the Ring Creek on a loose steep climb and even more once I hit the black diamond Powerhouse Plunge trail. 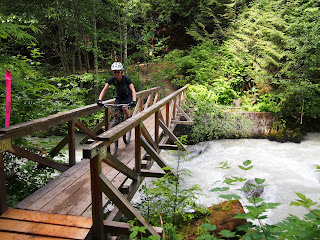 Here, I started to remember how the Squamish course fools you by being fun in the first part, then becoming brutally difficult just as your legs get tired. How is one supposed to ride over a mine field of baby head rocks, covered in moss, roots cris-crossing the trail in all directions, while your front wheel is constantly being grabbed by mean forest spirits and the turns are too tight? 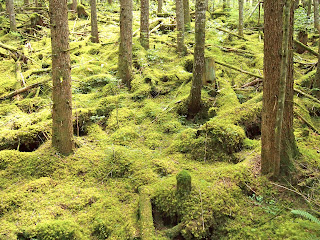 What followed next is (again) just a blur in my memory, but the intense feeling of suffering comes back easily. The trails at Mt. Crumpit were tough. Some of the trail names, like S&M, Three Virgins and Seven Stitches, would seem to remind one of college years, but on the Graduate I felt like a freshman. 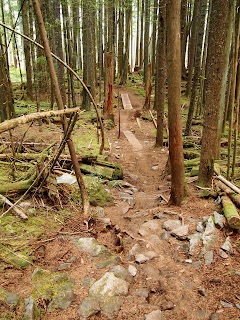 Finally, a smooth trail under the bluffs brought some relief to my neck, hands and legs. Passing the tent city at the Brennan rec centre made me almost nostalgic about not racing the BCBR this year. There was no time for emotions though, I was way down south from Alice Lake, where I parked my car. I used a bike path through the valley, climbed up Garibaldi heights using just some gas fumes from my tank and pushed the granny up Jack's trail back to the lake. 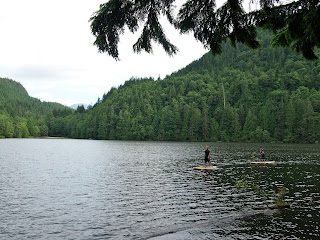 I interpreted the fact that I completed the 27 mile course in three and half hours as being accepted to the University. Hungry, beat up and sore, I loaded the Mojo onto the roof rack and drove to Whistler, to continue my education.
Posted by Unknown at 7:00 PM