On the third day at Whistler, I overslept. Two long days in the saddle, late sunsets and staying up late listening to The English Beat concert on the Olympic Plaza were enough. I rushed out of the door walking my Mojo and holding half eaten bagel in the other hand, just to find the Olympic Plaza, the venue of the final, 7th stage of the British Columbia Bike Race, full of people. Nervous racers frantically checking and re-checking their bikes and gear, organizers running back and forth, spectators and bystanders, all this transformed the plaza into a buzzing bee hive. 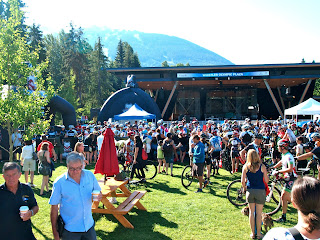 I was hoping to find my friend Martin, who has been finishing strong in all six previous stages and wish him good luck in the final stage. Have you ever tried to find somebody in a crowd of 500 bikers all wearing helmets and dressed up in colors? But I got lucky - I ran into Martin's wife and daughter who led me to Martin and had just time to take a pre-start picture and yell "Zlom vaz!" (Czech for Skol! although it literally means "break your neck" as if Martin needed to be reminded to ride at a breakneck speed). Few minutes later, the waves of racers poured out of the starting gate at really scary speed. 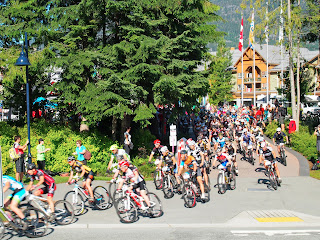 My plan was to ride the singletrack trails at the Lost Lake park before the front of the race would get there. Nothing energizes your tired legs like a knowledge that there is a pack of ultra-fast riders behind you. Peaches en Regalia, Dinah Moe Humm to Torture Never Stops, rocks and abrupt steep climbs on the Fountain of Love. At the intersection of Upper Panorama and Pinocchio's Furniture, a race marshal thought I had at least 20-30 more minutes to safely ride the race course. I did not feel safe at all on all the woodwork that Pinocchio's Furniture trail is, but I committed to staying on the bridges and rolled through. I got off the singletrack after Elephant Bridge and parked at the intersection with Gee I Like Your Pants just as a helicopter with camera crew approached and the first couple of fast guys emerged from the woods. 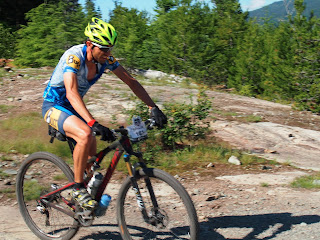 Watching a race like this surely got my adrenaline levels high, but I had to focus on what laid ahead. A short approach on the Valley trail put me on a tight but not overly scary singletrack called Cut Yer Bars, where I did just squeeze my old-fashioned 680mm narrow handlebars between the trees. A quick pause at the trail head for the (in)famous black diamond trail A River Runs Through It, just enough to drink some water, wipe my sweaty palms on the shorts then diving in thinking "what the heck". The change from valley streets and manicured bike paths full of casual tourists to the green hell of the forest and its trails, that would qualify for "almost impassable" anywhere else, was kind of a shock. The first section of the trail was rocky, technical to the point of last seconds saves, where you just think "Shit!" but have to handle the next obstacle, but rideable. Then came the swamps and bridges. 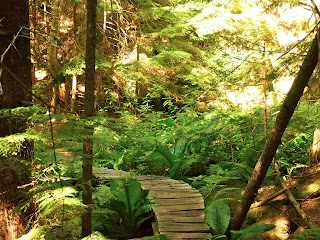 By now, I thought I would risk riding them, after all, these elevated plank walks are actually easier to roll over than a technical trail full of rocks and roots. If only my brain could be convinced...I tried to look far ahead but often could not see the end of it. This was frankly getting ridiculous. "A river runs through it and Jan hike a bikes through it" I mumbled to myself as I fought the battle between wanting to try and fearing an ugly crash. 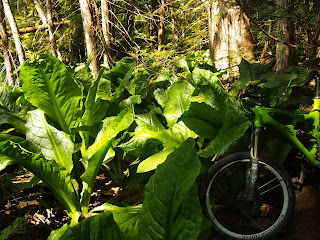 After another trail head close to Alta Lake road, the trail became less extreme, or I should rather say offered less extreme ways around extremely difficult stunts. I pushed with all my strength over logs and roots and even experienced brief moments when I surprised myself: while my legs kept torquing the pedals in the large chainring, my body automatically leaned and balanced, my arms pulled up or pushed forward and my mind somehow managed to stay ahead of what was happening below my wheels. 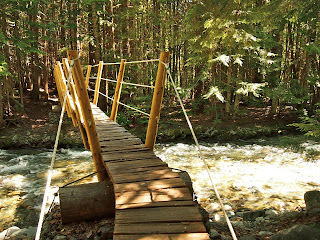 This is not to say there were many situations that rudely interrupted these rare moments of flow. Front wheel stuck suddenly between rocks, fork bottomed, liver and other internal organs hitting my lungs. Or a nice approach to a feature where I could not see the back side of it followed by panicky nononono! unclip! look where your foot goes! damn this was close! how the hell do I get down from this thing! I'm exaggerating of course, I was just couple of feet off the ground, yet the brain cells amplified the danger signals.
But as most exams last just under an hour, fifty minutes later I could relax, take off my helmet, massage blisters on my palms and chew on an energy bar on the shore of the beautiful Alta Lake. 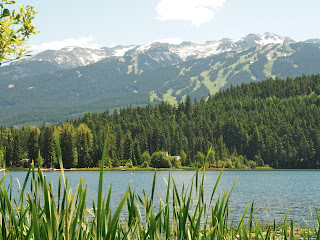 At the end, I managed to more or less ride the trail, stay unhurt, I did not break a rear derailleur off, did not snap a chain and actually enjoyed the ride despite its terrors. What degree did I earn? PhD? Now way, not even close to Masters, I would gladly accept a BS/BA from the most accredited biking institution in North America. Here is my unofficial diploma.
Posted by Unknown at 10:10 PM