This summer, I cannot help myself but think often about how very different my life as a cyclist has become, compared to a year ago (and the six years before that). I have sold my road bike, my Sidis are getting probably moldy at the bottom of one plastic bin in the garage, my Garmin has became one of the less used digital devices, I don't track mileage, vertical feet and the latest carbon bikes.
Instead, I signed up for several mountain biking Meetups and every time I go mountain biking, it is at a different trail, with a different group of people. Yet, every time and get my ass whipped both by the terrain and by how skilled other riders are. Every time, I enjoy the ride tremendously, even if it is ten miles long and I had to drive fifty miles for it.
I put commuter slicks on my 29er hardtail and ride it happily at a leisurely pace four miles to work and back on a bike path. I put knobbies on a lightweight tubeless wheel set on the same bike and I can ride 25 miles of singletrack or 60 miles of gravel roads.
Sure, my weekly mileage has dropped so much compared to California summers, partly because of a hectic job, partly because I live in a big city now, and yes, also because my allergies are giving me hard time and sometimes I just feel like having no energy at all. The resulting weight gain is another matter, let's not go there.

But, strange as it may sound, I do not miss races, whole day suffer fest rides on the same dusty trails over and over. I do miss long back-road rides, simply because those trips are such a great way to explore the country.

Here are a few random places and rides I have done recently, with Marketa or others:

Lake Wenatchee and Chikamin Creek.
Fire road climb to some super sweet singletrack descent through beautiful pine forests. A little dusty on pumice laden trails, but the quality of trails as well as a swim in the lake post ride made up for that. With coffee and ice cream at Leavensworth, it was like being in Europe without the snotty Europeans ;-) 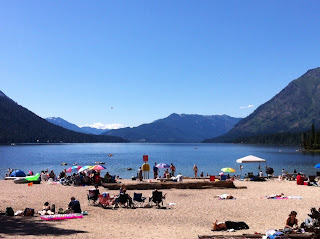 After work ride to Lake Washington for a swim.
Ten miles out, ten miles back home, on a paved bike path (Burke-Gilman), with views of Mt. Rainier and Seattle in the late afternoon light. 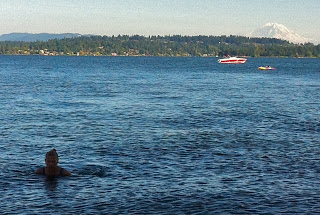 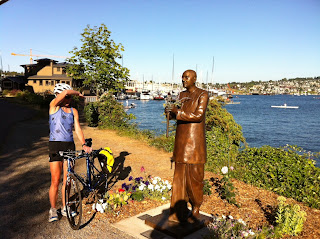 Olympic Discovery Trail, Adventure section.
The ODT follows the northern shore of the Olympic Peninsula for 120 miles on roads, streets and paved paths, but there are 25 miles of dirt trails in the middle of it. I started on a beach at Crescent Lake (this lake beats all the others so far) and rode on road to the trailhead. 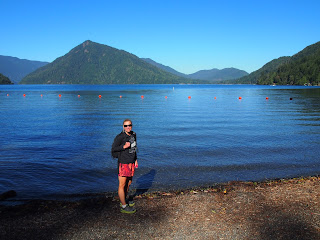 After a few miles on logging roads and rocky fire roads, the trail turned into a singletrack and entered a nice forest. I found this sign particularly fitting: we don't allow horses on some trails because these trails are too fragile for iron horseshoes and four hoofs (unlike two soft rubber tires), yet I haven't met a single equestrian (or other human) on the trail.

There may be couple of riders on the trail on weekend days, yet the trail was perfectly maintained, with bermed turns, nicely constructed bridges, trimmed hedges on the sides. People here simply enjoy working on trails and it shows. 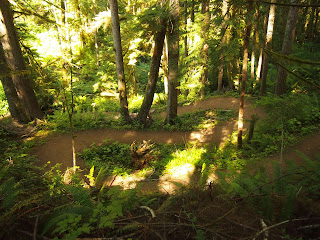 I did not get to ride the full 25 miles and back (my whole ride was 22miles), because there was the clear lake to swim at and a cold beer to have at a beachside resort, after another bike ride with Marketa along the lake shores. 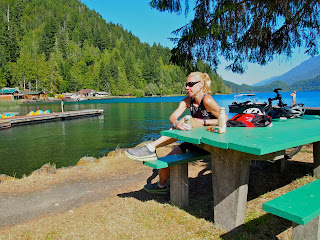 Being the last car on a ferry back to Seattle (saving another hour of waiting in a line of cars) was just a perfect ending of the trip. 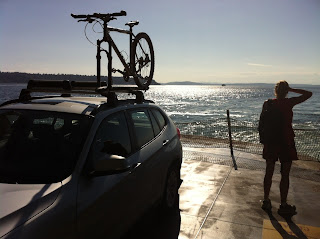 I guess the crux of this post is that I bike now for RECREATION (that's what Canadians at Whistler also call bombing down the A-line) and as a result, I feel much re-created at the end of our weekends, although often tired. It is a different kind of tiredness, no cramps, no dehydration, no lingering soreness, none of the "training" BS. I know that in the future, I will need to challenge myself again, perhaps by a long bike-packing trip or a double century, but for now, I'm just ridin' along and enjoyin' the summer while it lasts.
Posted by Unknown at 9:04 PM