Waking up at 6AM in the Whistler Village and walking my bike to Starbucks for coffee and bagel was an interesting experience. By 7:30AM, the sun had been up for several hours, the sunshine was already pretty intense, yet the Village walk, bursting with crowds last night, was completely deserted. I used the paved Valley trail for access to cross-country trails on the valley side opposite to Blackburn and Whistler mountains and the famous bike park, hoping to ride as far north on the Rainbow-Sproatt Flank trail, then turn south and ride as far south as possible.
The first part of the ride was a brutally steep climb straight up the hillside on a fire road. My legs ached, and this again reminded me of what it feels like to get going in the mornings of multi-day bike stage races or tours. I was barely moving at 2.5-3 mph, the Garmin reminding me of the snail's pace by beeping and going into an auto-pause mode every few minutes. The reward was a view of the valley below and the mountains. 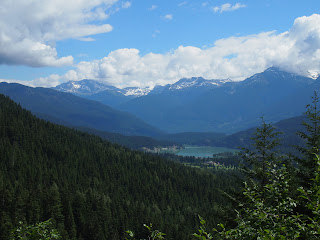 When the fireroad ended and turned to a forest track, a sign warned about some ongoing trail maintenance. Good, I thought, the trail is being fixed, this will be an easy traverse along the valley side. Unfortunately, while the main trail bed was fixed after the trail was probably mostly washed away by snow melt (this must have taken an enormous amount of work), countless streams of water flowing down the hillside eroded deep trenched across the trail every couple of hundred yards or so. Making these water bars rideable will probably take constructing about five hundred bridges, something the Canadians are so good at that it will undoubtedly happen soon. 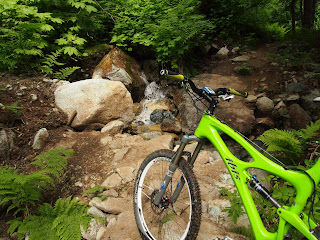 For now, it was on and off the bike, steep hike a bike sections, then dead fall, then roots where even hiking became very hard. On top of that, I was becoming a juicy lunch for myriads of black mosquitoes, the size of dragonflies, or so it seemed. Getting seriously lightheaded from the blood loss and progressively more dispirited by dragging the bike up rooty steps, I gave up after a mile or so. 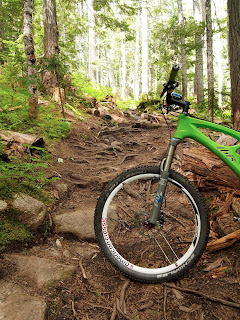 I turned around and enjoyed descending on the technical trail, hopping over some of the streams, walking a few sections. What took me 45 minutes to go up was a 10 minute downhill ride. Back at the gate, I pointed my bike southward, hoping for better trail conditions. Another brutal climb, this one with ankle deep loose soil of freshly constructed trail, meaning another lovely hike-a-bike. I reached a ridge completely soaked, with dozens of overlapping bites on my arms, but I found such a great lunch spot on some rocky outcroppings overlooking the valley below, that my mood improved at once. 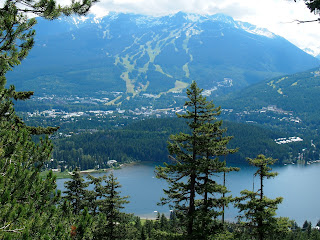 From here, the trail was getting better and better, narrowed to a rocky singletrack among pines and cedars and gradually descended in switchbacks. I crossed several spurs dropping straight down on my left and marked with black diamonds, first Cheap Thrills, then Industrial Disease. 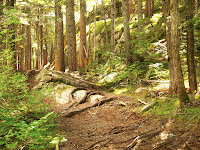 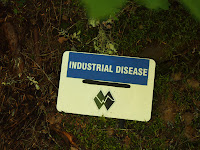 The trail eventually ended at the Function Junction trail head and crossing, where I picked up a trail called Train Wreck. My rough map of the valley trail system ended here and so did maps on the information booth. By now, I was so happy to be riding a flowing single track trail after the morning torture that I did not hesitate and hit the trail. The riding became immediately Tech 7 on a 1-10 scale and the trail crossed train tracks a few times. I asked a trail runner if the trail was worth further efforts and she assured me that it would become a lot of fun, but advised to be careful at the railroad crossings since a train was coming "in about ten minutes or so". As I popped out of the woods at another rail crossing, I looked at my watch and thought, hm, perhaps I have couple of more minutes. As I looked for trail markers (see the orange arrow spray painted on the side of the rail?), whoosh, a giant train pulled by three or four engines, went by. 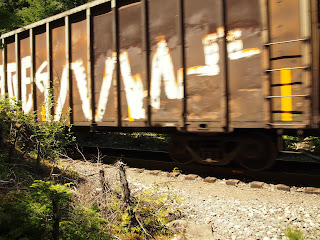 Avoiding a train wreck this time, I kept fighting the roots and rocks along a beautiful glacial water river. 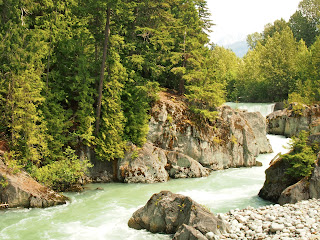 Eventually, the trail entered deep woods and here was the train. I mean the train wreck - I could see about four or five train cars, all rusted and in various stages of being reclaimed by the nature, scattered through the dense forest. When I looked closer, I could see wooden ladders and bridges and skinnies, but these features did not quite connect the wrecked boxcars, leaving at least 10m (30ft) gaps in between. 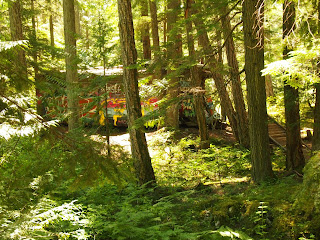 To some, this must be a great playground, to me it was just an interesting trail decoration and I was glad to have reached the end of the singletrack after another mile or so. I crossed the river and connected with the Sea to Sky trail. This trail was smooth and made of packed fine gravel, yet it climbed and descended in a real mountain bike style. I guess this is the trail that you ride when you retire at Whistler and hang your full face helmet and downhill bike in the garage. It was still a good workout and by the time I crossed the Olympic Village area, which looked like a ghost town after the athletes had long left, I was running out of steam. 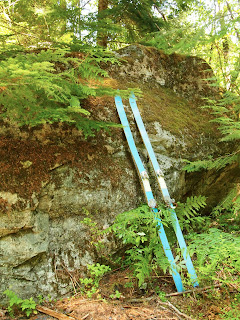 The paved Valley Trail came to my rescue and I cruised all the way up to my Village condo, a shower, wiener schnitzel and a beer (actually two, Euro size 0.5 liter). A long day at a class, for sure. For the course transcript, look here.