During one of the espresso machine discussions at work, somebody described the greater Seattle area as a result of child's game, something like the computer game SimCity: add snowy mountains, islands, lakes, hilly neighborhoods, build bridges, throw in airports, planes, sure - seaplanes when you are at it, skyscrapers, ferries to get you to the islands...what's next, yes, big university, software companies, a research center that will cure cancer...a monorail, bunch of bike paths that go for 20, 30, 40 miles out of town. 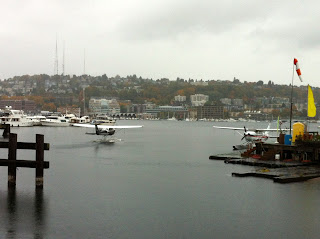 Even though I haven't ventured much outside a small radius around my new workplace, I like that you can see some water, bridges, boats and houseboats all around. Even the water that keeps coming down from the air pretty much all the time since my arrival seems refreshing. There are smells of autumn in the air and no dust on trails.
The small group of runners at work uses the I-5 overpass as a place to go when it pours. On Friday, we ran on the man built features as if they were trails, followed by what my colleagues call "some calisthenics". It was more than enough for my untrained upper body. The next day, I nixed my plans to ride to a cyclocross venue after looking out of my hotel room window. I reasoned that I should first try running in the rain before I start riding in the rain, since it will be easier to stay warm (a good excuse, me thinks).
I started out along Lake Union east shore south on Cheshiahud loop towards the new Museum of History and Industry. Boats and marinas are packed next to each other all the way to Westlake. Wooden boats, electric boats, mega yachts, indian canoes...
I connected to the Ship Canal bike trail and continued along the south side of the ship canal.


Leaving the very modern and upscale Westlake area, you will see few bridges across the canal, some suitable for bike crossing. The waterfront area gets progressively rougher looking as you travel west, but to me it still looked friendly enough. Even runners on the trail were friendly, one woman even unplugged her earphones to tell me where the Ship canal trail continued. This could never happen in California!

At mile 4, I decided to turn back, just past the Seattle rowing center. From here, it would be another mile on the trail to my future place of residence. I look forward to this 5mi work bike commute which I hope to do even in rain. 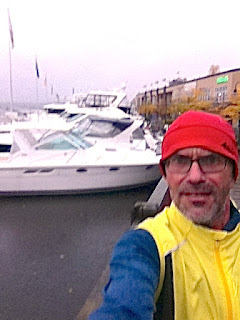 I finished this run completely soaked, but warm and happy to be moving again, something this phone self-portrait did not quite capture. I hope I did not look this raving mad when I ordered spicy Thai food later that evening.
Posted by Unknown at 8:26 PM