The bike:
My nine years old aluminum bike, Giant OCR1, held up fine. All original parts held up fine. Some parts I had put on the bike as "upgrades" failed:
First hitting a rock tore the casing of Vittoria Randonneur tire and the resulting bulge wore the tire through, including the protective nylon belt.
Second, the big hit probably accelerated a rear rim failure, but after two more days of riding, there were cracks in the Al rim around six spokes! This is not acceptable for wheel that is advertised as a "Clydesdale" suitable (Neuvation Cycling R28).
Third: the Neuvation saddle never felt too uncomfortable on 100 mile long one day rides, however, after three days in the saddle, this one caused me lots of pain, an irritated prostate and numbness in parts where you rather not have it.


Touring accessories:
Topeak Al rack held to the rigors of loaded touring well, no problems there. The Ortlieb panniers were just awesome, excellent attachment system, easy to load and unload, pack, carry, and yes, they are yellow and highly visible.
ACA map holder: I hit the map case with my knees every time I stood up to climb. This was annoying but I eventually got used to it. A position centered over the bars would be better (one could actually move the velcro loops), but that would restrict mounting additional devices onto the handlebar, such as GPS or a computer.
Top tube little bag: very useful for energy bars, gels and a chap stick.

The route:
The ACA Sierra Cascades route is well chosen I think given both the remoteness of SoCal mountains and overpopulated valleys in between. One could ride the route in shorter segments, stopping at nice places and use the mountain resorts and camp sites. We chose to do maximum distance we could every day and not care much where we would end up for the night. That put us at some less than desirable places, like Palmdale, which are the worst examples of California sprawl, with huge food deserts and streets absolutely not bike friendly. However, as we entered the National parks (Sequoia, Kings Canyon, Yosemite), the scenery got much more interesting, and I believe that NorCal, Oregon and Washington are probably the prettiest parts of the route. That said, seeing the big mountains, deserts and environments of Southern California first hand was a great experience for me. 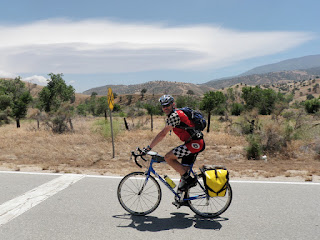 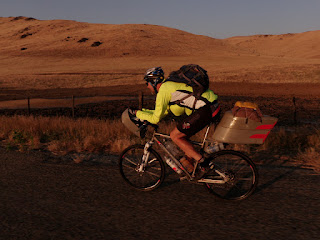